The Lexus IS300 has been in production since 2000. It’s currently in its third generation, however, Lexus skipped the second generation in the US in favor of the IS350. The first gen production was cut off after 2005, with IS300 production resuming in 2016 as part of the third-gen.

First gen models utilized the 2JZ-GE engine, the non-turbo version of the legendary 2JZ-GTE, which is a 3.0L straight-six producing 217hp and 218lb-ft. of torque. Third-gen models added forced induction with the 8AR-FTS engine, a 2.0L turbocharged inline-4 producing 241hp and 258lb-ft. of torque. 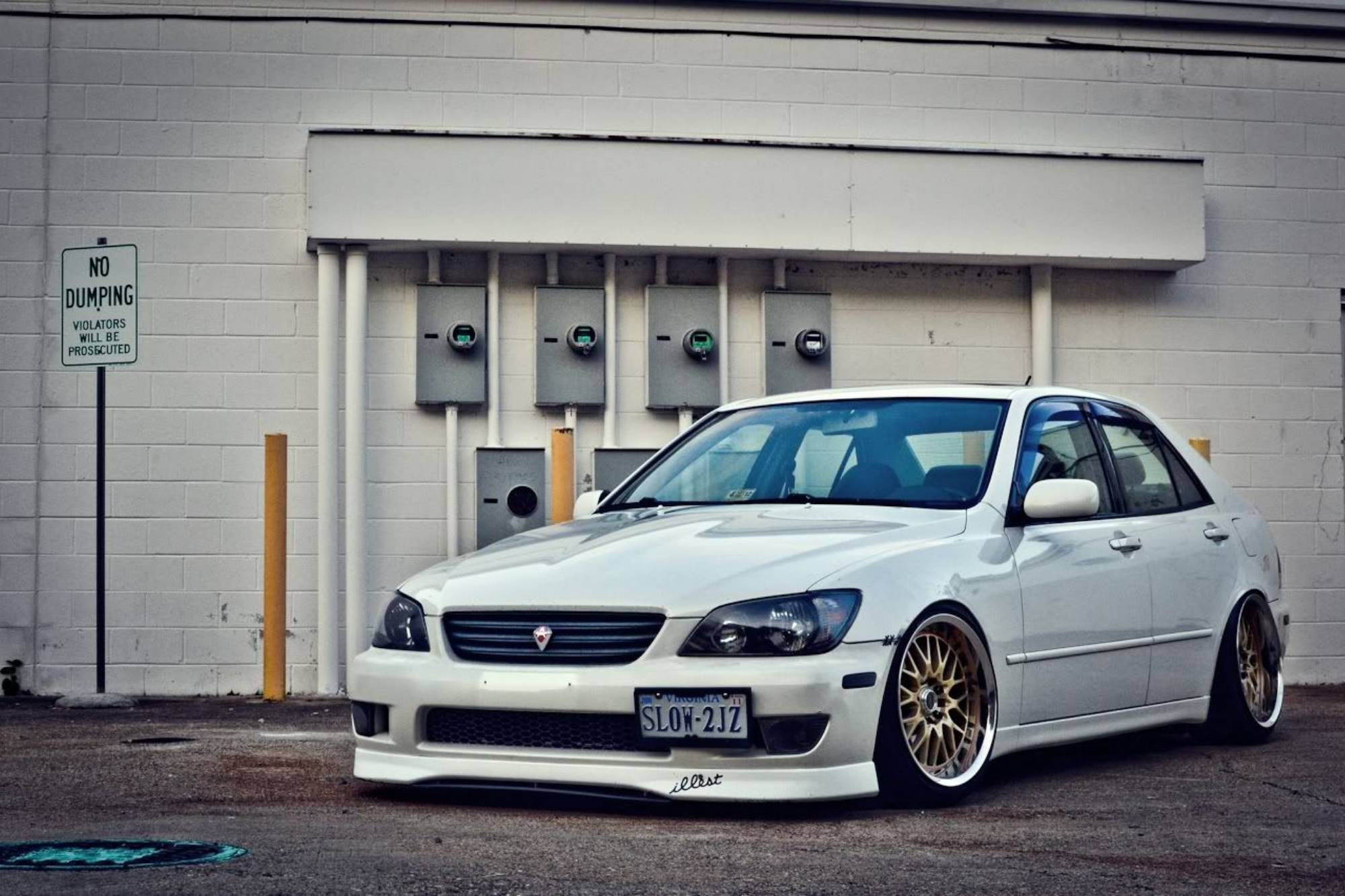 We’re focusing on the best bolt-on IS300 mods. One item we haven’t included in our list is the addition of forced induction. Since the 2JZ-GE is built off of the same platform as its more powerful brother, it can handle power and boost quite well. Turbo kits are a bit more of an advanced and detailed topic, so we will save that for its own separate guide.

The 6 best IS300 mods we list on here will get you to about 220-230whp for manuals and around 210whp for eshifts. You can break past those numbers and stay naturally aspirated but it’s very expensive. It will require a stroker kit, meth injection, an aggressive tune, and maybe even some nitrous. The stroker kits are about $7.5k, so let’s just ignore this as an option for now.

So, if you want more than 230whp the best option is to add a turbocharger. If you do plan on eventually adding a turbocharger, then we recommend ignoring the majority of the mods on this list. Your whole exhaust system will change when a turbo is added and your car will need to be re-tuned so adding things like headers and y-pipes is a waste of money since they will eventually be irrelevant.

If you do plan on adding a turbocharger it’s best to spend your money on things like suspension, braking, tires, and other handling related mods that will be more necessary with a high horsepower car.

Also, keep in mind adding a turbo kit will end up running you close to $5k on the low end for a budget setup and up to $10k+ for a proper setup once you add the boost controllers, timers, widebands, fuel management systems, upgraded injectors, full exhaust systems, etc.

An upgraded intake is one of the easiest first mods to make to virtually any car. While adding an intake to an otherwise stock IS300 won’t provide a ton of performance benefits, it will once the other mods mentioned are added. Creating more power requires more combustion, and air or oxygen is a fundamental component of combustion.

On a stock 2JZ-GE an intake will probably get you about 2-3whp. However, when combined with these other IS300 bolt-on mods it will provide 7-10whp of gains. So while it might not be the “best” first mod, it is an essential one and also one of the most cost effective ones for starters.

There are various different intake options for the IS300 3.0L. They are all virtually the same and offer the same benefits.

Headers are one of the best standalone mods for the 2JZ-GE. More power means more exhaust gases. The stock headers become highly restrictive once more power is added which creates a buildup of backpressure within the engine. The backpressure causes exhaust gases to seep back into the combustion chamber which results in lower amounts of oxygen in the combustion chamber and therefore less power. Headers will also help decrease exhaust gas temps and engine temps making them a great mod for reliability as well.

Outside of making your engine run healthier, headers are good for about 10whp and 10wtq power gains due to the reduced backpressure.

Headers come in all forms, from $800 HKS headers to $100 China headers. Everyone has their opinions on which are best, the most important thing is getting a set of headers that bolts properly to the y-pipe. A lot of header options will come with Y-pipes but a lot don’t also. Headers are just piping so I don’t have anything against going for the cheap options, but make sure the fitment is good and stick with something that uses 304 stainless steel to prevent rusting.

Both the headers and the Y-pipe house catalytic converters in the IS300. The biggest power gains come from deleting both of these cats because they are predominantly what causes the restriction. The caveat here is that deleting catalytic converters is illegal. The alternative option is to get high-flow cats but these are more expensive and options are limited due to the age of these 2JZ-GE engines now. The power difference is probably about 3whp less for high flow catted options.

The Y-pipe bolts directly up to the headers, connecting the headers to the cat-back portion of the exhaust. 2JZ-GE headers combine into two pipes, each one housing three cylinders of exhaust gases. The y-pipe is called a y-pipe because it connects to the two header flanges and then combines into one single pipe where it then bolts to the cat-back exhaust.

The Y-Pipe is the second most restrictive portion of the exhaust since it houses a catalytic converter and sits behind the headers. Therefore upgrading the y-pipe can help further reduce backpressure within the exhaust system and increase power. Since the restriction from the y-pipe is a bit further away from the engine it provides slightly less power gains than the headers. However, it still provides a solid ~8whp when going with a catless option.

As mentioned above, just make sure the y-pipe you get properly bolts to the headers.

To be honest, a catback exhaust system is probably the least worthwhile mod on our list, unless you want the louder exhaust sounds. Catbacks are the most expensive exhaust component and provide the least power gains. With that being said they do reduce some exhaust backpressure and are good for about 2-3whp.

Just like with headers, there are $150 exhaust systems and $500 ones. They are really all the same, but picking your exhaust brand is a bit more important than headers. Headers won’t add too much additional sound to the exhaust whereas a catback will. So picking a cat-back exhaust for the IS300 really comes down to sound preference and looks.

I tend to tell people to save the money and spend it elsewhere from a performance perspective. If you want the sound, go for it. Otherwise the money is best spent on suspension or handling mods unless you are inching for every last bit of power the 2JZ-GE has in it.

The most unique and probably advanced mod on our list is an upgraded exhaust cam gear. Exhaust valve timing on the 2JZ-GE is controlled by an exhaust gam gear. The adjustable cam gears were primarily made for people running aftermarket cams with higher lift, but they can also benefit IS300’s with the stock camshaft with bolt-on mods. The gear allows you to adjust valve overlap; more valve overlap is beneficial for NA cars.

Whether an exhaust cam gear gains power or not is a debated topic. However, what is known is that it does improve the power curve and delivers more consistent power and acceleration. Dyno charts show gains around the 6-8whp mark but most owners notice the improvements in the power curve over the power gains. Folks with turbocharger setups have shown gains near 20whp with an adjustable exhaust cam gear.

For a modded IS300 with stock cams most people recommend setting the exhaust cam gear to -4 for the best performance and gains.

Last on our list, but the most important mod to bring everything together is a tune. Tunes adjust the ECU and variables such as fueling, timing, etc. to improve power and performance. Tunes are especially important once mods are added as the stock ECU tune isn’t optimized for more air flow, less backpressure, and so on.

Unfortunately, flash tuning the stock ECU isn’t an option for these cars. The Apexi SAFC 2 was the old tuner of choice but it is no longer produced as far as I’m aware. The options today are getting a standalone ECU, albeit they are quite expensive and rather advanced from a user friendliness perspective. We recommend working with a tuner and digging into more research and specifics on the options available. We’ll dig into this topic in its own post down the road.

A standalone ECU is also required for adding a turbocharger so it’s a good investment whether you plan to add FI or stick NA. The options on the market are Haltech, MaxECU, AEM, Link, ECU Masters, etc.

The mods on this list will get you somewhere around 225whp. Without breaking out a ton of money or adding forced induction, this is about the max you can expect. The world record NA 2JZ-GE has 320whp but the owner apparently has about $20k-$25k into the build which is just not worth it.

Now, what about with a turbo? On the stock block with stock internals the 2JZ-GE can handle about 400whp before investments in internals and block strengthening is needed. While it can make it to the 400whp mark, it is generally agreed that ~350whp is the safe limit without significantly impacting reliability. Even 500whp+ is easily achievable, but it will require some expensive upgrades.

If you want to spend a few thousand bucks to get a 225whp IS300, go for it. However, it is generally agreed that the best way to add power to the 2JZ-GE is to add forced induction via a turbo kit. These engines can handle more than twice the power they produce from the factory, but the only way to get to those levels of power gains is through turbocharging. These engines simply do not mod well when left NA, albeit an extra ~40whp over stock isn’t terrible.

One noteworthy point is that you likely won’t experience the gains we mention in this article without a proper tune. And keep in mind that the power levels mentioned are for a fully-modified IS300. Don’t expect to get 10whp from an intake on a completely stock car. Mods are complimentary and build off of each other.

Overall, the IS300 has a lot of tuning potential. The caveat is that the tuning potential all lies in turbocharging and a proper turbo setup is going to run you $8k-$10k.