Powered by the VQ35DE engine, first gen G35’s produced from 2003-2007 ranged from 260-298 horsepower. In 2007 the G35 received a facelift along with some small engine modifications that increased power to 306hp. The new engine was dubbed the “Rev-Up” engine and went by the code VQ35HR.

Early G35 models will dyno in the 220-240whp range whereas the rev-up G35’s will dyno closer to 250whp bone-stock. While these power numbers aren’t bad for a naturally-aspirated V6, the ~3,500lb curb weight on the G35 can make it a bit sluggish.

For performance enthusiasts or those just looking for a bit more power, bolt-on mods can add 40-50whp the G35. Unfortunately since the VQ35 engine is naturally-aspirated achieving power levels in excess of that is going to require forced induction which will run you close to five-figures. This guide will briefly cover turbo upgrades but if you are seriously considering adding forced induction then I recommend reading out 350Z Turbo Upgrade Guide. We don’t have a G35 turbo upgrade guide yet but both the G35 and 350Z use the VQ35DE and VQ35HR engines so the guide is still applicable to the G35.

This guide focuses on power-adding engine mods, for the best suspension performance mods, check out our G35 Coilover Upgrade Guide.

Some of the best Infiniti G35 performance upgrades include:

The benefit of an intake on a stock engine is minimal, but the benefits increase as other G35 mods are added. The biggest power gains from an intake are achieved when forced induction is added, but taking that out of the picture you can expect power gains in the 3-6whp range and torque gains around 2-4wtq.

Power gains are going to be on the lower end of the spectrum on a stock engine but will increase towards the upper range once other mods are added. 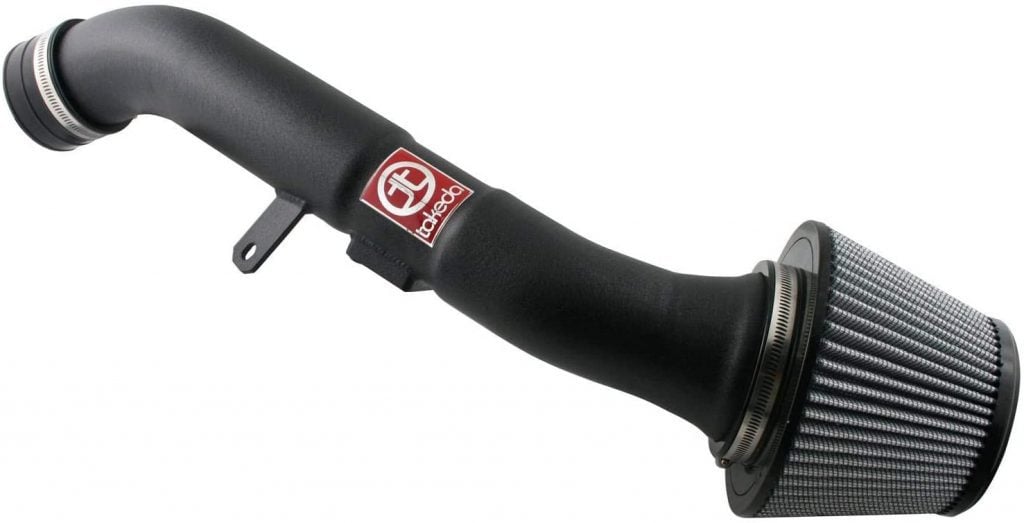 aFe’s Takeda intake system is the best combination of price and quality on the market. At $265 the intake is quite affordable and provides easy bolt-on fitment. DIY’ing the install is super easy and can be done by any beginner. aFe claims 16whp gains and 19wtq gains but these numbers are astronomical and unrealistic.

If you are looking for a more budget friendly option, the G35 DC Sports Intake is the best bang-for-the-buck intake with reputable reviews. Coming in at $150-$200 this intake is great for those looking for the same performance benefits on a budget. The biggest difference in the two intakes is the piping finish and how the intake looks in the engine bay. Both do the same thing and will provide the same benefits.

Although I put this mod at #2 on the list, a plenum spacer is hands down the best mod for the G35. A plenum spacer is one of the cheapest mods and provides the most power out of all of the bolt-ons we are going to discuss.

The VQ35DE engine has an awful plenum design which cuts off airflow. The intake plenum is the part of the intake manifold that holds all of the air and distributes it to the cylinders. It has “runners” that branch off of it to feed each cylinder with air. On the VQ35DE the spacing between the plenum and the first two runners is so small that it restricts airflow and reduces power.

Since the VQ35HR has a new intake manifold design, this modification only benefits the non-rev-up G35’s with the VQ35DE.

MotorDyne offers the best plenum spacer on the market for the G35. The spacer adds 5/16 of an inch to the plenum and is the easiest kit to install compared to the other options on the market. Installation shouldn’t take more than an hour and can be done by beginners as well. At ~$250 this mod provides the best price per horsepower gains out of any G35 mod. MotorDyne claims 11-13whp gains which we believe is honest and accurate.

The exhaust manifold is the first part of the exhaust system in the VQ35DE/HR engines. It bolts up to the exhaust ports on the engine and collects exhaust air which it funnels to the catalytic converters. There are two exhaust manifolds each responsible for 3 cylinders. Each manifold has three pipes, one for each cylinder, that then combine into one pipe.

Exhaust manifolds are restrictive because you have 3 separate exhaust ports funneling air into one chamber. This restriction increases backpressure which reduces power. Performance headers replace the exhaust manifolds. Instead of funneling air into one chamber, headers have one pipe for each cylinder. So it is three separate pipes that then meet at the connection to the cats.

By providing each cylinder its own pipe, backpressure is reduced. Less backpressure means more power and lower engine temps.

If you have an intake and a plenum spacer then headers are an even more important upgrade. Once you are flowing more air into an engine you need to reduce exhaust restriction otherwise the increased volume of intake air will create even more backpressure in the exhaust system. 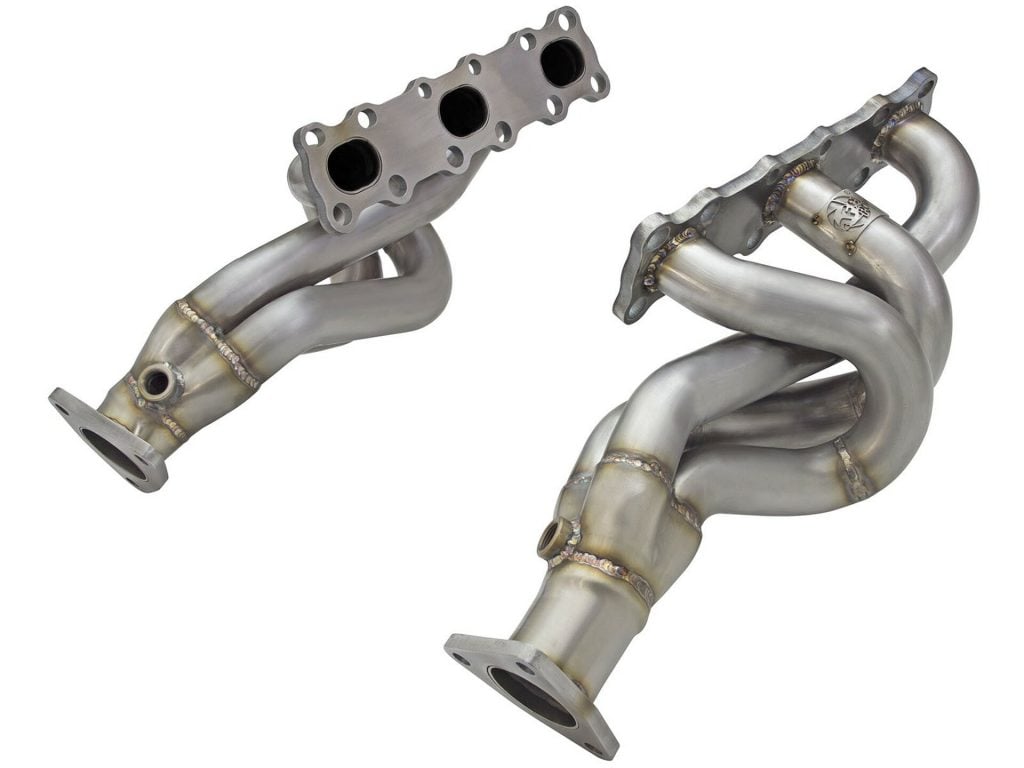 Long-tube headers are quite expensive but they do provide additional power benefits through the removal of the cats. If you are planning on adding headers and test pipes then you can consider long-tube headers. However, if you want to keep your car legal and leave the stock cats or upgrade to high flow cats then you need to stick with short-tube.

Following the exhaust manifold or headers is the catalytic converters. The G35 uses a Y-Pipe design in which each header bolts-up to a separate pipe that then combines into one pipe where the Y-Pipe meets the cat-back exhaust system.

You have two options here: high flow catalytic converters or test pipes. Catalytic converters are the most restrictive part of any exhaust system. Therefore removing them completely provides the most performance benefits, however, it is illegal. Therefore, high flow cats are becoming the more popular option as they keep your car legal (in most states) and still provide power benefits.

We aren’t going to “recommend” any test pipes since they are illegal. But if you are going this route, keep in mind you can either opt for short tube headers + test pipes, or long-tube headers. Finding catless options is becoming more difficult with EPA crackdowns lately and finding a shop to install them for you is even harder. Plan on DIY’ing this upgrade if you go the catless route.

We usually don’t recommend cat-back exhaust upgrades for performance purposes. Most naturally-aspirated and turbocharged engines receive little to no benefit from cat-back exhaust upgrades. The majority of exhaust gains come from headers, downpipes, test pipes, etc. However, for the G35 upgrading the cat-back system actually has proven to add some meaningful power.

There are a bunch of exhaust options out there. The two things to look for are exhaust style and piping diameter. For style there are dual exhaust systems and single systems. Dual systems provide better flow but also cost more. Piping diameters usually range from 2.25″ to 2.5″, with the larger diameters clearly flowing more.

We aren’t going to go into too much detail here since the biggest factors here are cost and sound. Most dual exhaust systems are going to provide the same performance benefits, and same with single systems. So a lot of the time choosing the right exhaust system for your G35 comes down to sound and price. 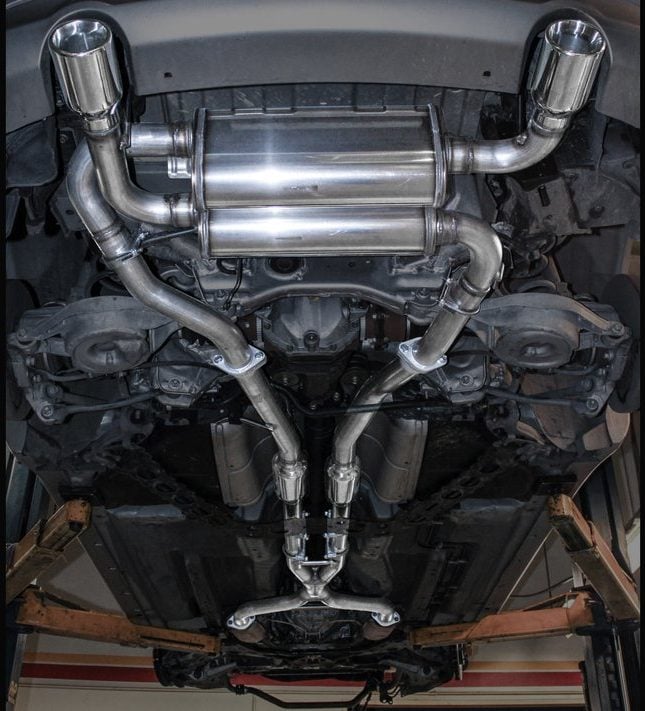 Fitment here will depend on whether you have a sedan or coupe and whether you have the rev-up or non-rev-up engines so keep that in mind. Since there are a lot of options we’ll try to lay it out in a helpful format based on price preference. Also be cautious of what all is needed before purchasing. Some of these systems come with the Y-Pipes, some don’t need them, and some of them require you to buy them separately, etc.

We’re going to keep this one relatively short here since there is too much detail to cover on adding forced induction. Check out our 350Z Turbo Guide to get a sense of cost, power levels, and supporting mods needed to add a turbo to your G35.

Adding a turbo kit can boost power levels up to 400-450whp for VQ35DE engines and 450-500whp for rev-up engines. Power levels above this are possible but will require internal upgrades and thousands of dollars in additional mods. Entry level turbo kits are going to run you in the ballpark of $7,500 and supporting mods will run you a few thousand more.

Even for more entry level turbo additions, you will need full bolt-on mods and a combination of fueling and cooling mods to ensure proper reliability. With that being said, we don’t recommend turbocharging your G35 unless you are comfortable spending $10k+.

What about G35 Tunes?

There really aren’t any true plug-and-play tunes for the G35. The best option is the UpRev Tuner but this requires you to actually tune the car yourself and isn’t as plug and play as something like a Cobb Accessport which no longer supports the VQ35 engines.

First of all, we don’t recommend tuning unless you are full bolt-on or running a turbo or supercharger. If you are full bolt-on and want a tune we highly recommend getting a custom dyno tune from a reputable tuning shop. Doing so can add 10-15whp which you likely won’t see from any sort of flash tune. If you are running forced induction then you will definitely need a custom tune.

The majority of power gains on a G35 can be unlocked through the intake system and the exhaust system. With an intake, plenum spacer, and some exhaust modifications you can add 40-50whp and about 35wtq to your G35 for a few thousand dollars.

Keep in mind the power gains we quote for each mod will vary depending on what other G35 mods you have. Generally speaking, the more mods you add the more benefit each one has and the more power it creates. The best place to start is with a plenum spacer since it is the cheapest and offers the highest power gains. Headers and high-flow catalytic converters are the second best things to add, but these begin to get a bit pricey as is the case with a cat-back exhaust system.

Without the addition of forced induction 290whp is going to be pretty close to maxed out on a rev-up engine with full-bolt ons. For VQ35DE models you can expect 260-275whp depending on which model G35 you have.

While a fully modded G35 isn’t going to start walking on turbocharged cars adding 40whp will really open the car up and make it a lot more fun.