The Hyundai 3.8 Lambda II RS MPi engine made its debut in the 2009 Genesis and Genesis Coupe. In 2012, Hyundai introduced the Lambda II GDI variant. The 3.8L V6 offers a respectable 286-348 horsepower and 264-295 lb-ft. It’s also an efficient engine that delivers solid fuel economy and reliability. No engine is perfect, though, and no exceptions apply here. In this article, we discuss Hyundai Genesis 3.8 Lambda engine problems, reliability, specs, and more. 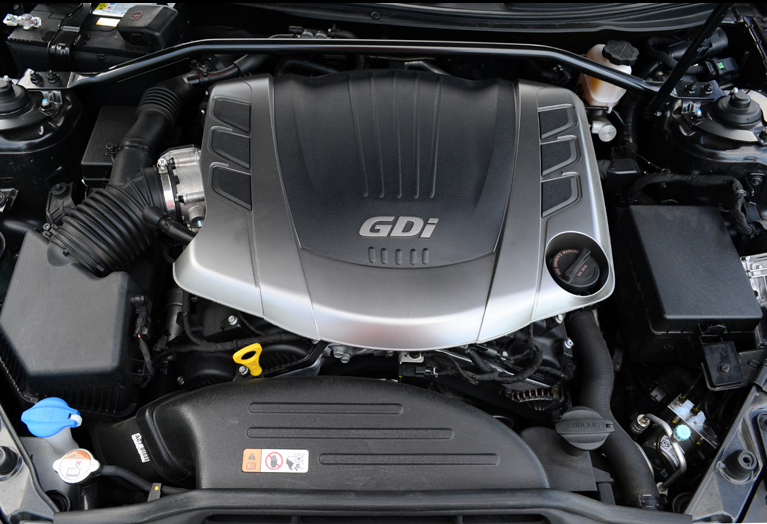 It’s important to differentiate the two primary variants of the Lambda II 3.8L V6 engine. The switch to the 3.8 GDI engine is a great change, but does come with one potential flaw – carbon build-up. Carbon deposits are a topic we’ll talk about in-depth shortly. For now, let’s simply lay out the two Hyundai Genesis engines.

MPI engines are the original variant of the Lambda II RS engines. MPI stands for multi-point injection. This 3.8 Lambda engine is in the following years and models:

Next is the Hyundai 3.8 Lambda II GDI engine where GDI stands for gasoline direct injection. It’s excellent fuel injection technology that allows for better performance and fuel economy. As such, compression increases to 11.5:1. This variant is in the following Hyundai, Genesis, and Kia models:

Genesis Coupe models come with up to 348 horsepower and 295 lb-ft of torque. Very good performance for a NA 3.8L V6 engine. A lot of the power increase is thanks to direct injection. However, carbon build-up is a flaw of the 3.8 Lambda GDI engine that we’ll discuss later.

Specs for the 3.8 Lambda II MPI and GDI engines are as follows:

Both variants of the Hyundai 3.8 share the same basic design. The MPI and GDI are both 3.8L V6 engines with aluminum heads and blocks. They also share the same 96mm x 87mm bore and stroke and DOHC 24-valve design.

The main difference is simply port fuel injection versus direct injection. The change did enable a compression ratio increase for the 3.8 Lambda GDI engine. Together the updates allow the GDI to produce up to 348 horsepower in the Genesis Coupe.

A few of the most common problems on Hyundai Genesis 3.8 MPI & GDI engines include:

Through the rest of the article we will discuss the above Genesis engine problems in-depth. Though, it’s necessary to add some housekeeping notes before moving along. We’re calling these among the most common issues for good reason. It doesn’t mean they’re truly common in the actual sense of the definition. Rather, when Hyundai 3.8 problems occur these are a few of the most common areas.

That said, the 3.8 Lambda II RS engines do offer pretty good reliability overall. All cars and engines are prone to issues, though. Anyways, we will circle back to the Genesis 3.8 reliability topic at the end of the article.

First up we have a topic unique to the newer 3.8L GDI engines. Carbon build-up is a topic we address often for direct injection. It’s awesome technology, but carbon build-up is a minor drawback. All engines produce some oil blow-by. That oil makes its way onto intake ports and valves. The MPI engine sprays fuel into the intake ports and detergents wipe away any oil deposits.

However, the Hyundai 3.8 GDI engine doesn’t have that benefit. Fuel sprays directly into the cylinders, so there is nothing to wipe away oil deposits. Over time, the oil blow-by sticks to valves and ports and forms what’s known as carbon build-up.

It’s true that modern GDI engines are much better at minimizing blow-by and build-up. However, without fuel washing over intake valves and ports there’s no perfect solution. Expect carbon build-up on Genesis 3.8L V6 engines to be an issue around 100,000 to 120,000+ miles.

Carbon build-up doesn’t pose any major threats to reliability or longevity. However, as deposits form they begin restricting air-flow. This can lead to a number of symptoms and drivability issues. It’s not absolutely required, but we think walnut blasting is a good idea every ~100,000 miles.

Some symptoms of carbon build-up problems on the Hyundai 3.8 Lambda II RS GDI engine may include:

As carbon build-up occurs it can cause inconsistent air-flow into the cylinders. This may lead to misfires which in turn can cause rough idle and/or stuttering while accelerating. Poor overall performance is possible when carbon build-up becomes severe.

Power loss is a major symptom of 3.8L Lambda carbon build-up. However, it can be the hardest symptom to notice. Deposits build over the course of years and years and tens of thousands of miles. The gradual loss of power and performance can make it tough to notice.

Walnut blasting remains the most effective way of removing carbon build-up from intake valves. It’s a process that involves removing the intake manifold. Walnut media shells are then blasted into the intake ports with a shop-vac. Walnut blasting the Hyundai 3.8 V6 engine is a few hour process, and labor will likely run about $350-600.

There are also various intake sprays designed to help clean intake valves. If used consistently these sprays may help slow the build-up of carbon deposits on the 3.8 GDI Lambda engine. However, once build-up is excessive they usually aren’t an effective solution.

Oil leaks on the Hyundai 3.8L Lambda II engine is a general topic. It’s likely not even fair to call a true issue for a couple reasons. One, there aren’t any frequent design flaws that cause the MPI or GDI engines to leak. Two, all cars and combustion engines are prone to oil leaks as they accrue age and mileage.

That said, a number of Hyundai/Kia/Genesis 3.8 Lambda engines have run into issues with oil filter parts. These oil leaks are typically simple fixes due to poor filter installation. It’s usually something to do with a washer, o-ring, or drain plug. Not a major issue but it’s a good idea to check for any leaks after any oil change.

Our main focal point is a few oil leaks that become more common at 8+ years and 100,000+ miles. Look for valve cover gasket, oil pan gasket, and main seal oil leaks. This isn’t an exhaustive list of all possible leaks on the Lambda GDI & MPI engines. However, those are a few common areas for leaks as these engines continue to age.

A few possible symptoms of oil leaks on the Hyundai Genesis 3.8L engine include:

Visible oil leaks are a dead giveaway. If you’re noticing drops of oil on the ground then the 3.8 V6 likely has an oil leak somewhere. Check the oil filter, oil pan, and main seal areas. Valve cover gaskets lie towards the top of the Hyundai 3.8 Lambda engine. They may leak oil onto hot components and oil burns off before reaching the ground.

As such, burning oil smells or light smoke from the engine bay are possible symptoms. Some oil may still drip to the ground, but small leaks will likely burn off first.

The exact fix and repairs for an oil leak obviously depend on the origin. Fortunately, most oil leaks are inexpensive o-rings, gaskets, seals, etc. They’re parts that usually only run about $10-50 for the 3.8L Lambda II motor. It makes oil leaks a cheap repair for the DIY crowd.

Labor is the part that can be tough to swallow on oil leaks. Valve cover gaskets are a couple hours to replace and will likely be about $200-400 in labor. However, things like main seals can be tough to replace driving labor costs to $500+.

Although the transmission doesn’t qualify as a true engine problem it’s an important part of the drivetrain. In 2012 – along with the move to the 3.8 Lambda GDI engine – Hyundai also moved to their own 8-speed transmission. Previous 2009-2011 Genesis models use a ZF 6-speed, which is a reliable transmission.

However, the 2012+ 8-speed did have some early issues. As a side note – we’re simply out of stuff to write about for Hyundai 3.8 engine problems. The transmission issues are a pretty minor point. Most problems were on early 2012 models, and it makes sense there were some early kinks to work out.

The long factory warranty is a great thing to have here. Most early transmission failures occur under warranty, and it seems to be mostly a non-issue as of now. Sure, the fluky transmission failures still happen but they’re few and far between. All in all, the ZF 6-speed in older Genesis models and the newer 8-speed are both great auto trans all around.

Note – one complaint is that the factory transmission software isn’t the greatest. There are transmission tunes

Symptoms that indicate the Hyundai Genesis 8-speed transmission is slipping include:

This isn’t an exhaustive list, but these are a few of the most common symptoms. As transmission slip the RPM’s will jump higher than they should while accelerating. The Hyundai 8-speed transmission might also shift rough. Lastly, hanging shifts or slow shifts can indicate slipping.

Is the Hyundai Genesis 3.8 Lambda II MPI and GDI engine reliable? Yes, we believe these cars and engines earn above average remarks for reliability. There really aren’t many major flaws or defects with the Hyundai 3.8L V6 Lambda engines. Carbon build-up is a minor concern on 3.8 GDI engines. However, it’s a small trade-off for direct injection which provides great performance and economy.

Otherwise, we didn’t have much to discuss with Hyundai 3.8 problems. Oil leaks become more common as the engines surpass 8 years and 100,000 miles. That’s true of most any car, though. The 8-speed AT on 3.8 GDI engines also had some issues, but it seems to be a great overall transmission.

Of course, maintenance is key to Hyundai 3.8 engine reliability. Use quality oils, change fluids on time, and fix problems if or when they occur. It’s basic stuff that should be done on any car. Do all of this and chances are the Hyundai 3.8 will provide great reliability for years to come. There are plenty over 150,000 miles with few issues along the way.

What’s your experience with the Hyundai 3.8 Lambda engine? Are you considering one?

Or check out our Hyundai 2.0T engine problems article