Hyundai and Kia’s 1.6L engine is a naturally-aspirated, dual overhead cam inline-4. Launched in 2006 the Hyundai 1.6 is still being manufactured today for Hyundai and Kia vehicles. The 1.6 is part of the Gamma engine family and has 5 different engine variations.

The Hyundai 1.6 Gamma engine was produced in both MPI and GDI versions. MPI versions use port injection whereas the GDI engines are direct injected. Additionally, a T-GDI version was released in 2011 and featured the addition of a turbocharger. 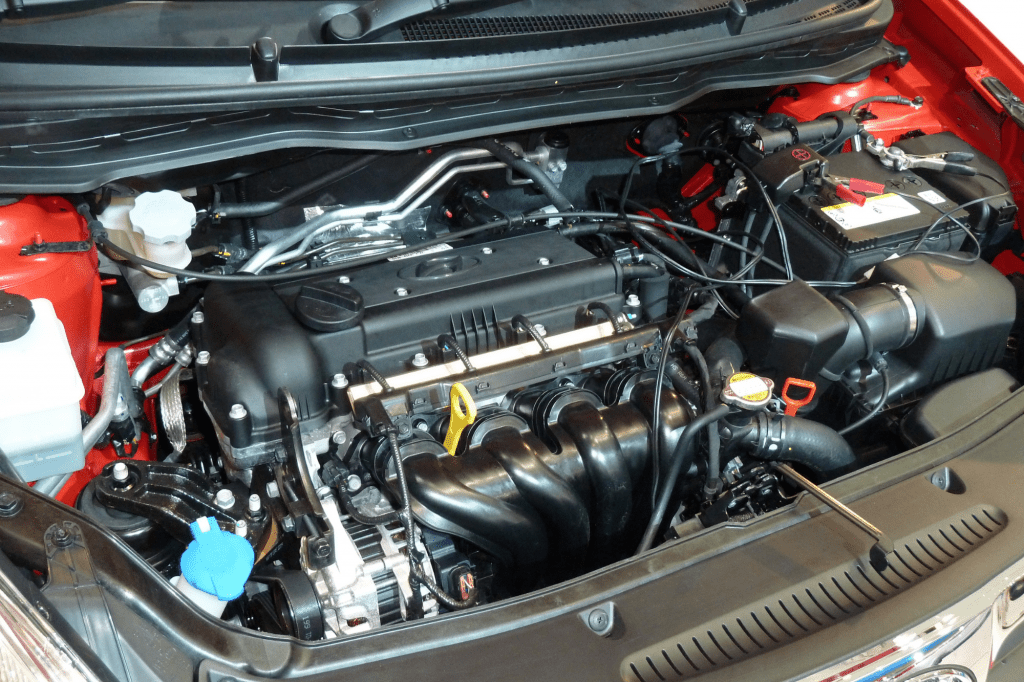 The Gamma I engine was produced from 2006-2010 and the Gamma II has been in production since 2011. The first gen 1.6 had an MPI version along with a hybrid engine that ran on liquefied gas accompanied by an electric motor. The second gem family features MPI, GDI, and turbo-GDI engine options.

As a heads up, all of these engines were also used across various international Hyundai and Kia vehicles which aren’t listed below. Below lists all of the US

The G4FC engine is a multi-port fuel injected engine producing 122hp and 115lb-ft. of torque.

The L4FA also goes under the engine code L4FC. It is a hybrid engine that runs on liquified petroleum gas (LPG) in combination with an electric motor. It was exclusively used internationally in the Hyundia Avante LPI and the Kia Forte Hybrid.

The G4FG engine is a port fuel injected engine that uses continuous variable valve timing. It produces from 121-132hp and 111-116lb-ft. of torque.

The G4FD engine is a direct injected engine with dual-continuous variable valve timing. The Hyundai 1.6 TDI produces 138hp and 123lb-ft. of torque.

The T-GDI engine is a turbocharged version of the 1.6 TDI engine. It features a twin-scroll turbocharger and intercooler in addition to the direct injection and dual-CVVT. It produces 201hp and 195lb-ft. of torque. Additionally, some of the cars with the turbo GDI came with a de-tuned version that produces 175hp.

Now that we’ve covered the different 1.6 variants let’s discuss the common problems of the Hyundai 1.6 engine:

The 1.6 Gamma has been in production for a long time and there are a number of variations. Not all of these problems are applicable to every single engine. We’ll do our best to note specifically which variants are most affected by each problem listed.

While oil leaks is a very general term, there are a few components in the 1.6 GDI engines that are known to leak. Outside of these few specific areas we’ll touch on below, oil leaks are still a common problem throughout these engines, and any engines really. As the 1.6 Gamma engine ages things like gaskets, seals, o-rings, and so forth commonly leak. Once you surpass the 100,000 mile mark oil leaks become a lot more common. However, the leaks we’ll discuss below are the ones that are more prone to arising before the engine reaches high mileage.

Secondly, the 1.6 T-GDI engine is known to experience leaky turbos where oil seeps from the turbocharger. Turbos have internal seals that are prone to wear down over time and leak. However, on this engine the leak more commonly comes from the turbo oil feed line rather than the turbo itself. The oil feed line, as it suggests, supplies oil to the turbo. This line is usually the cause of the leak which means only the line needs to be replaced and not the whole turbo itself.

Engines do consume oil naturally, so the need for frequent top offs might not mean you have an oil leak. Obviously, the most tell tale sign is visible oil leaks on the ground underneath your engine. However, you can also have oil leaks without any drips onto the ground.

If you smell burning oil then the leak is probably towards the top of the engine, aka the valve cover gasket. The smell comes from the oil dripping onto hot engine components. If there is a big puddle on the ground then it is probably coming from the bottom side of the engine.

All you 1.6 MPI owners are lucky on this one. Carbon build-up only affects the TDI direct injected 1.6 Gamma engines. However, this isn’t just a problem of the Gamma engines, it also affects the 2.4 Theta and the 2.0T Theta.

All engines experience some form of “blow-by”. This blow-by ends up getting recirculated into the intake system via the PCV valve. Because the blow-by is dirty-oily air, carbon deposits naturally buildup in the intake valves.

MPI is port fuel injection which means the fuel is injected into the intake manifold/ports. When fuel is injected there it travels with the air through the ports which cleans out any gunk built up in the ports. Therefore no carbon buildup occurs.

TDI is direct injection which on the other hand delivers fuel directly into the cylinders. Therefore, there is no highly pressurized fuel traveling through the intake ports to clean them out. The only thing traveling through the ports is air which isn’t powerful enough to wipe away the carbon buildup. As the carbon continue to build-up it can restrict the airflow to the cylinders and cause various performance problems.

Carbon buildup occurs over time so it isn’t always easy to notice since the performance declines it causes happen slowly. By the time you hit 100,000 miles you probably have a good amount of carbon built up in the intake valves. We recommend cleaning the intake valves every 100,000 miles via walnut blasting which we’ll cover below.

Misfires and rough idling probably won’t occur until you have a lot more than 100,000 miles. And power losses are hard to notice since they happen over time. Therefore, diagnosing this problem is a bit difficult. With that being said, carbon deposits are a way of life for direct injected engines. By the time you eclipse 6-figure mileage, we can guarantee you have a lot of carbon deposits sitting in your valves.

The proven way to clean out the carbon in the valves is through walnut blasting. Walnut blasting involves using small walnut media shells and a shop vac. The shells are blasted through the intake ports with the shop vac and blow away any carbon that is stuck inside the ports.

The materials to do this job are inexpensive but the labor can be expensive. The intake manifold needs to be removed for the ports and valves to be accessed. You will probably get quoted somewhere around $400-$600 for walnut blasting.

A lot of people go forever without cleaning out carbon buildup. If you care about engine performance then we recommend doing it every 100,000 miles. If you don’t really care then we suggest just getting it done once you begin to experience the misfires and rough idling.

The purge control valve, or solenoid, is part of the Gamma engines EVAP system. The EVAP system (evaporative emissions control) prevents fuel vapors from escaping the gas tank and getting into the atmosphere. When an engine is turned on, the purge valve is open which allows fuel vapors to be passed into the engine where they are burned.

On the 1.6 Gamma the purge valve is electrically controlled. All Hyundia and Kia cars are prone to broken purge valves for whatever reason. When the valve fails it can either fail open or fail closed. If it fails closed it prevents the vapors from being able to escape the gas tank. When it fails open it continually funnels the vapors to the engine, even when turned off.

If the valve gets stuck open it can dump a lot of vapors into the engine while its turned off which can make it difficult to start and cause rough idling for a few seconds after starting.

Since the valve is electrically controlled it will give a check engine light if it fails. Therefore, the best sign to tell if its bad is to use a code reader. If you have a P0441 engine code or another EVAP related code, it’s probably the valve.

Fortunately, the valve is super cheap and very easy to replace.

While this isn’t an extremely common problem, 1.6 Hyundai and Kia’s are known to occasionally blow their catalytic converters. This also appears to be more common on the Kia Soul.

Catalytic converters are components of the exhaust system and are responsible for cleaning exhaust air before it exits the exhaust and enters the atmosphere. Catalytic converters use a honeycomb structure inside of them that is made with rare earth metals such as platinum, palladium, and rhodium. Nitrogen oxide, which is the main exhaust gas byproduct, collides with these metals which causes a chemical reaction and breaks down the NOx.

Exhaust gases exiting the combustion chamber are extremely hot. Misfires and ignition related issues can cause unburn fuel to enter the exhaust system. When this happens the fuel collides with the hot metal in the cat and combusts, melting the rare metals inside of the cat. This creates hotter exhaust gas temps which further melts these metals and ultimately clogs the exhaust system.

If the catalytic converter gets clogged it will create a ton of backpressure leading to various performance issues. The other alternative is that the metals completely burn down and hollow out the cat which will cause you to fail an emissions test.

Overall, the 1.6L Hyundai and Kia engines have above average reliability. Unlike the issues with the Theta engines the Gamma’s don’t have any weaknesses that can lead to catastrophic engine failure. Oil leaks are normal as engines age, carbon buildup affects every single direct injected engine, purge valves are super cheap to fix, and cat failure isn’t that common.

There really aren’t very many issues that the 1.6 Gamma faces that can lead to expensive repairs. The majority of the issues these engines suffer are relatively minor and don’t have any serious performance or driveability implications. With that being said, maintenance is a huge factor in reliability. Hyundai recommends 9,000 mile oil change intervals. Just change your oil every 5,000 miles and the likelihood you experience any issues will drastically decrease.

You should be able to reach the 200,000 mile mark with the Hyundai 1.6 without significant maintenance needs. However, keep in mind as you reach these higher mileages there are a number of general maintenance items that will appear like spark plugs, water pumps, coil packs, injectors, belts, hoses, etc.

How has your experience with the 1.6 Gamma MPI and TDI engine been?