Horsepower vs torque is a topic that comes up frequently in the automotive world. They’re a big highlight of spec sheets, come up often in car reviews, and are constantly advertised. However, not many truly understand the difference between horsepower and torque. Which one is better and why? Is power or torque better for speed and acceleration? In this article, we discuss horsepower, torque, the differences between the two, the importance of the entire power & torque curve, and more.

What is Torque (TQ)?

Torque is the rotational equivalent of linear force. Instead of applying the force straight forward or backward torque measures the force of a twisting motion. Think of turning a wrench and tightening a bolt. The specs are found in foot-pounds (lb-ft) in the US or in joules or newton-meters in the International System (SI).

An engine creates rotational force by driving the pistons downward, which then rotates the crankshaft via connecting rods. That twisting force applied to the crankshaft then makes its way through the transmission, driveshaft, rear differential, and then finally the wheels and tires. In summary, torque is the ability to do work.

What is Horsepower (HP)?

Horsepower is a unit of measurement of power where power is the rate at which work is done. The more rapidly a given force is applied the more work can be done. In order to make more horsepower you either need a greater twisting force or you need to create the force more often.

Internationally, engine power is usually quoted in Kilowatts (kW). The relationship of power and torque is coming up in the next section. For now, the important note is: power is the rate at which work is done.

Horsepower vs Torque: What’s the Difference?

So, horsepower is simply equal to the torque output multiplied by engine speed and then divided by 5,252. This equation is important to truly understand horsepower vs torque. Torque tells you how much twisting force you can generate. RPM tells you how many times in a given time you can create that force. Then, once you know how many times the force can be applied in a given timeframe you can calculate the rate at which work is done (power).

Ultimately, internal combustion engines produce torque first and foremost. They turn an air-fuel mixture into energy. That energy forces pistons downwards in order to rotate the crankshaft and create torque.

Further Look at HP vs TQ

There’s a simple explanation of power and torque that I come across and hear often: torque gets you off the line and horsepower lets you go fast. This is a generally true and simple explanation, but it can be misleading if you don’t understand the true relationship of horsepower vs torque. Let’s use two quick examples based on the equation for hp vs tq:

Most engines idle around or under 800rpm and horsepower is bound to be much lower than torque at those engine speeds. Ultimately, horsepower is the ability to do work and that power is what gets you accelerating. However, imagine trying to move a 50,000 pound truck from a standstill with 22.8 horsepower.

That’s where the portion of the saying that torque gets you off the line is very true. Again, it’s still the rate at which work is done (power) that truly gets the truck moving. Torque is important, though, since at a set engine speed a higher torque value means more horsepower. Hence the 304 horsepower at just 800rpm in the first example.

It’s also true that horsepower let’s you go faster. Assuming all else equal, such as weight, aerodynamics, gearing, etc. The faster work is done the faster a car can drive.

Another important topic is the difference in various horsepower vs torque measurements. The Society of Automotive Engineers (SAE International) sets standards for how power and torque are measured and corrected. Certain corrections are used to adjust power and torque to standard atmospheric conditions so that comparisons are more accurate (since pressure, temperature, and humidity can affect power and torque output). The three primary SAE measurements are gross, net, and certified.

Gross power and torque numbers were commonly used prior to 1972. These power ratings are taken at the crankshaft without engine accessories like the alternator, cooling fan, water pump, etc. Cars were often fitted with long-tube test headers rather than the OEM exhaust manifold. It’s not a very accurate representation of the power and torque the engine actually makes when installed in the car.

After 1971, manufacturers began using SAE net power ratings. Net ratings are the power and torque at the crankshaft with all OEM accessories and parts. In other words, it’s a very accurate representation of the output as installed in a street-legal car.

In 2005, the SAE introduced a new standard for power and torque. Certified power ratings must be done in a certified facility and be witnessed by an SAE approved 3rd party. This ensures accurate numbers so manufacturers cannot manipulate certain test factors.

The previous examples are standards for manufacturers as they quote horsepower and torque. However, they still aren’t an accurate representation of the output that reaches the rear wheels. None of the above SAE standards account for parasitic drivetrain losses as they’re all measured at the crankshaft.

Of course, the torque must transfer all the way from the crankshaft through the transmission, driveshaft, differential, axles, and then to the wheels. Most car enthusiasts are likely familiar with the terms wheel horsepower (WHP), rear wheel horsepower (RWHP), and/or wheel torque (WTQ).

These tests are done on a chassis dynamometer – or dyno for short. A chassis dyno measures torque at the drive wheels; either the front, rear, or all wheels depending on the car. This test tells you how much power and torque is actually making it all the way to the ground.

As a note – chassis dynos also have multiple differences. Two common dynos are the DynoJet and Mustang Dyno. The Mustang Dyno is also known as the heartbreaker dyno since they’re known to read low (and no, they aren’t just for Mustangs – it’s just the name). Then there are differences in correction factors such as SAE and STD. This could be an article of its own, so we’ll leave it there for now.

The below is a dyno chart with two examples to show the importance of the powerband: 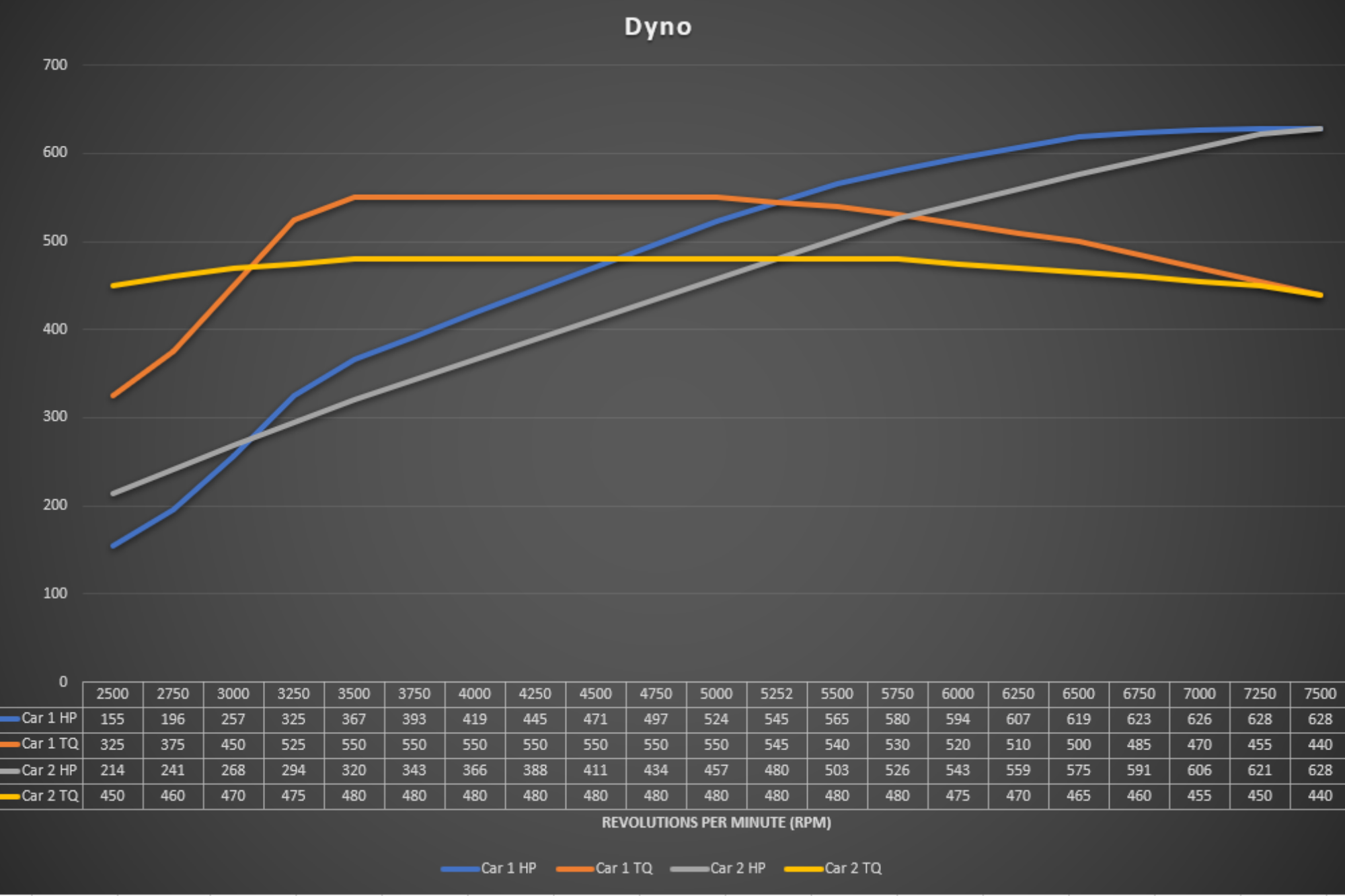 Our goal with car 1 was to mimic a dyno of a turbo or twin turbo engine. Car 2 represents either a large naturally aspirated (NA) engine or supercharged V8. Turbo engines generally have some turbo lag, so torque starts lower while the turbos build boost pressure. NA or supercharged engines have quicker response and deliver torque almost instantly, and power is pretty linear.

However, turbo engines (with smaller-mid size turbos) excel in the mid-range where they offer immense torque. Larger turbos typically have lots of turbo lag and do better on the top-end, but that’s a conversation for another time. Anyway, the turbo engine has the clear advantage here. Of course, assuming similar weight, gearing, traction, aerodynamics, and the many other factors that affect acceleration and top speed.

Yes, both cars make 628 horsepower. If these cars were for sale they would both advertise 628hp. If you asked the owners how much power their cars made they would both have the same answer. Naturally, they would probably round up to 650 horsepower (or 700hp if they have a few stickers) but that’s neither here nor there.

The Point: It’s About The Whole Powerband

The above dyno was not to illustrate that torque is more important. Instead, the point is that peak power or torque numbers only tell a small fraction of the story. Peak numbers simply tell you the maximum power and torque at the specific RPM they occur. Some engines have a small powerband while others have larger powerbands.

Long story short – yes, it’s very possible for a 600 horsepower car to blow the doors off a 700hp car. That’s especially true if the lower power car has better gearing, lower weight, and other factors in its favor. Likewise, a 600 torque car could beat a car with 700 torque.

Ultimately, power and torque each serve their own purpose and are very much intertwined. Neither is necessarily better or more important than the other without seeing the full picture. That’s why the powerband and torque curve are such an important piece of the puzzle when it comes to comparing engine output.

Horsepower vs torque conversations are commonplace in the automotive world. That’s especially true when it comes to arguments like, “No, it doesn’t matter that you have 50hp more than me because I have more torque!” However, is one measure really better than the other?

Torque is the ability to do work while horsepower is the rate at work is done. This is shown with the simple equation: HP = TQ x RPM / 5252. In other words, horsepower is equal to the twisting force multiplied by engine speed and then divided by 5,252. That equation alone shows that horsepower and torque are very closely related.

Ultimately, the rate at which work is done (horsepower) is the most telling sign about engine performance. However, horsepower is calculated using torque which means more torque at a given RPM means more power. In that sense, it’s hard to say either figure is more important than the other.

Instead, the biggest factor of horsepower vs torque often comes down to the entire powerband and torque curve. Peak numbers only paint a very small fraction of the picture. 700 horsepower or torque only means so much if you create that output for a very short burst versus an engine that can sustain that output for a longer duration.