Honda however also has two other variations of this technology: i-VTEC and VTEC-E. They are all variable valve timing and lift systems but they work a bit differently. This guide is going to cover VTEC vs i-VTEC vs VTEC-E differences as well as provide a high level understanding of what variable timing is and the benefits Honda engines receive from it. 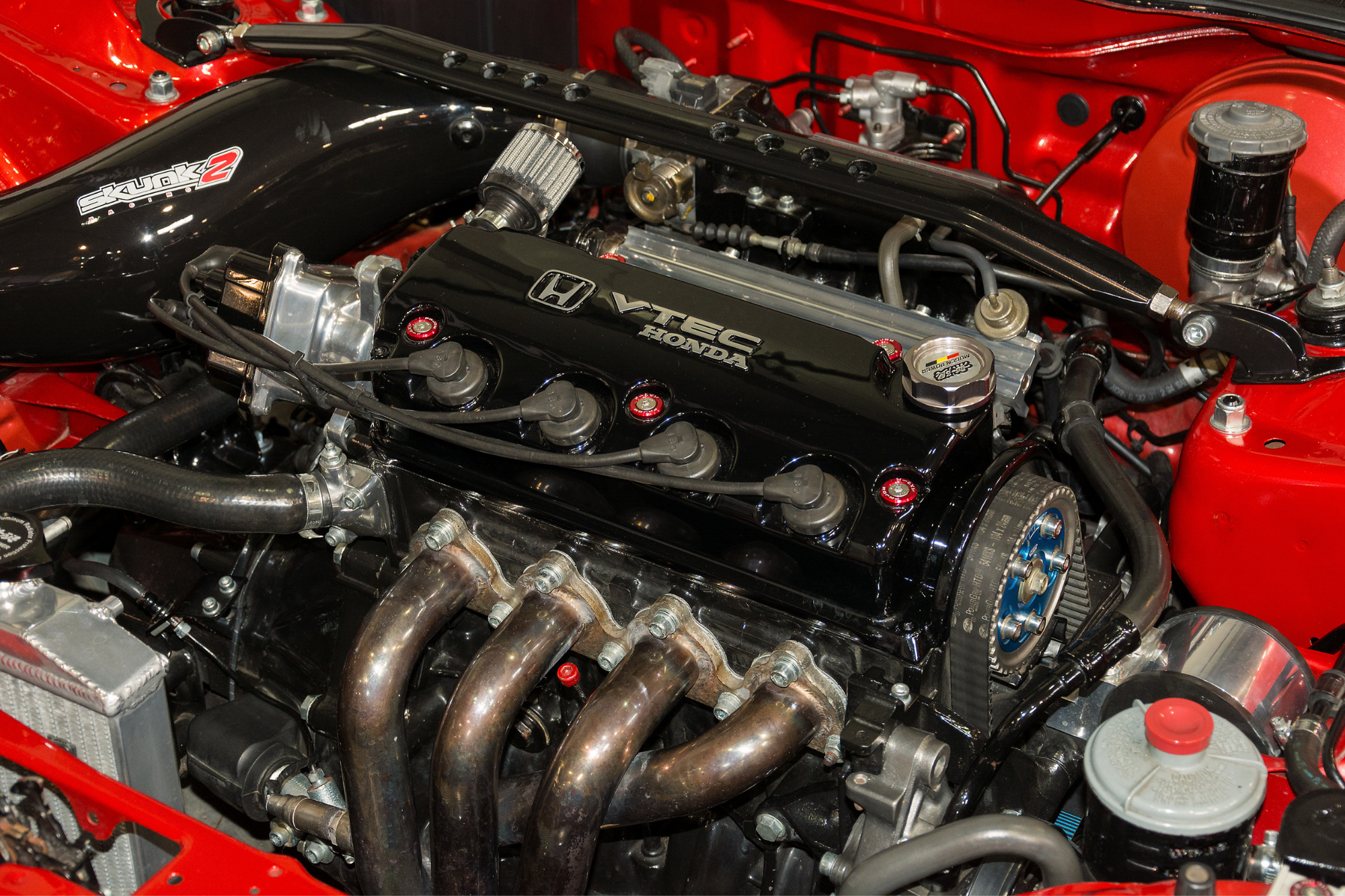 What is Variable Timing & Lift?

On engines with variable lift the camshaft has two cam “profiles” or two sets of lobes, a low-lift and high-lift. As the name insists, low-lift has smaller lobes which mean the valves don’t open as far. High-lift has larger lobes which allows the valves to open further and therefore let more air into and out of the combustion chamber. During normal driving the low-lift cam profile is engaged. Under more aggressive driving, or as the throttle opens more, a solenoid switches over to the high-lift cams which increases valve travel and performance.

Valve timing has to do with how when the valves open and how long they stay open for. Variable timing allows the engine to control when and for how long the valves open under different operating scenarios. It therefore controls the air-to-fuel ratios in the cylinder since it controls how much air enters the cylinder which is one of the ways it impacts emissions, engine temps, and fuel economy.

When you combine both of these technologies into one system, such as VTEC, you get increase power, better control the power curves, all while reducing emissions and improving fuel economy. This is a very basic explanation and there are dozens of ways of implementing VVT and VVL, so check out this in-depth video if you want to learn more.

What is VTEC & How it Works

If variable valve timing isn’t complicated enough, Honda added i-VTEC for you, which essentially stands for Intelligent VTEC. It was released in Honda’s in 2001 and has been used by virtually all of their performance engines since then.

Traditional VTEC engines use the design we mentioned above. This system can only control timing via the lift and duration provided by the two different camshaft lobes or profiles. So, to gain more control over valve timing Honda developed and integrated what they call VTC with VTEC which is what is know known as i-VTEC.

VTC is variable timing control and what it does is allow advancing or retarding of the camshaft to control valve overlap. In traditional VTEC engines the exhaust valve only opened once the intake valve fully closed, meaning the two valves were never open at the same time. VTC allows for the angle of the camshaft lobes to be changed so that the valves can overlap, or be open at the same time. The variable nature of it means that it can be adjusted at different RPM levels.

So, What’s the Difference Between VTEC and i-VTEC?

i-VTEC adds additional valve timing control by allowing for adjustments to the angle of the camshaft. To maximize performance at both low and high RPMs you need the valves to open and close differently for each RPM range. VTEC doesn’t do this whereas i-VTEC does which is the primary difference.

Therefore, i-VTEC offers a smoother power band and increased performance at both high and low RPMs compared to the traditional VTEC.

Both VTEC and i-VTEC are performance oriented systems. They are built to improve upper RPM horsepower. While they are also designed to help fuel economy, increasing horsepower and fuel economy don’t really go hand in hand. Therefore, we have VTEC-E for which the E stands for Efficiency.

VTEC-E is a fuel efficient version of VTEC that is more fuel economy oriented than it is power oriented. It is predominantly on hybrid and fuel-efficient Honda’s.

It works by shutting off intake valves during low RPMs to improve fuel economy. For example, on a standard 16-valve engine each cylinder has two intake valves. VTEC-E engines will deactivate one of the intake valves, leaving it mostly closed turning the engine into a 12-valve engine. When one valve is closed there is less space for air to enter the combustion chamber which causes it to enter the engine faster which atomizes the fuel better and causes it burn more efficiently. This is called a lean burn and increases air-to-fuel ratios thus increasing fuel economy.

VTEC-E increases fuel economy at the expense of performance and power. However, Honda did develop what is called a 3-stage VTEC which combines both traditional VTEC and VTEC-E, providing better low end fuel economy while still offering high-end performance. 3-stage VTEC engines are quite rare due to valvetrain complexity and not used any more today.

VTEC vs. i-VTEC vs. VTEC-E Summary

i-VTEC was the improvement to the original technology that came out in 2001. It added variable timing control to the traditional system to allow for the camshaft angle to be changed, therefore allowing for control over valve overlap. This allows for optimal performance at both low and high RPMs. It offers better low-end torque and high-end power compared to the traditional system.

Lastly, VTEC-E is the fuel efficient version of Honda’s variable valve timing technology. It essentially turns a 16-valve engine into a 12-valve engine by shutting off one intake valve for each cylinder. This causes the fuel to better oxidize which increases its combustibility, allowing for higher air-to-fuel ratios and therefore less fuel to be used.

Overall, VTEC is a technology that was designed to improve performance, reduce emissions, and increase gas mileage.

VTEC, i-VTEC, VTEC-E, VVT, VVL, VTC…trust me I’m confused too. Hopefully this article somewhat makes sense and helps you differentiate between the different versions of VTEC. If not, drop your questions in the comments and I’ll do my best to answer them helpfully.