The Honda J Series of engines was introduced in the mid-1990s as a successor to the previously utilized C-series. Initially introduced in 1996, the J series from Honda signifies the 4th generation of V6s from the manufacturer. This engine may be considered typical in terms of V6 designs. However, the impact of the J30 engine helped propel Honda’s global success throughout the late 1990s into the early 2000s.

These V6 engines utilize a compact aluminum cylinder block. The J30A engine led to a whole family of developed engines from Honda, including the J25, J32, J35, and J37. The J30 had eight total different variations before Honda moved on to producing the J32 and ultimately discontinued the J30 after the introduction of the J35. By 2007, Honda had ceased production of the J30 engine completely in favor of its newer variations. However, throughout this guide, we will examine and discuss the Honda J30 engine specifically, including its power, performance, and overall reliability. 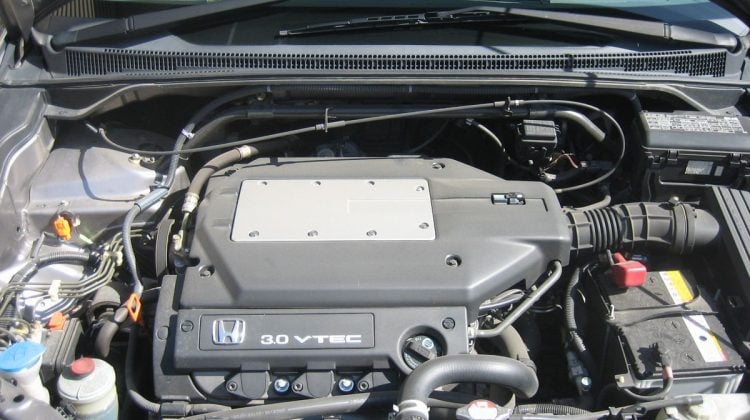 The Honda J30 engine was produced in eight variants, slightly differentiating in power, and used within different models and applications. The power output of these engines ranges from 200 to 355 horsepower and 177 to 354 lb-ft of torque. In addition, some J series engines utilize twin-scroll turbochargers, and all engines within the series use a water-cooling system. Due to the wide variety of engine configurations and associated specs, we will outline the J30A’s specs specifically. Therefore, the basic engine specs for the Honda J30A are as follows below:

As highlighted above, the J30A1 engine type and its lightweight aluminum block/head create 210 horsepower and 200 lb-ft of torque. In comparison, the J30A4 has a power output of 242 horsepower and 212 lb-ft of torque. Due to the novel design and capabilities of the J30A4, including the utilization of a VTEC system and higher compression ratio (10.0:1), the J30A4 variant was listed on Ward’s Top Ten List of Best Engines from 2003 to 2004. Therefore, the J30A and its predecessors have made a wide impact on the global automotive market and directly promoted the growth of Honda. Due to the fact that eight variations of the J30 engine exist, let’s take a look at the models that utilize each differing Honda J30 in the following section below.

What Cars Use the Honda J30 Engine?

The eight variations of the J30 engine and the models that utilized each engine are listed below:

Certain Honda J30 engine variants are still applied to different Acura and Honda models throughout 2022. As mentioned previously, the J30A was discontinued in favor of the J35 less than a decade after its introduction in 1992. Yet, the continuance of the Honda J30 series throughout 2022 showcases the strengths of this engine system and the value of adaptability they possess. Of course, each variant differentiates in power and performance; however, the broad understanding of the J30s is that they are impressively reliable. With that said, let’s take a look at our reliability rating of the J30 engine below and the most commonly reported problems for the Honda J30 engine series.

Generally, Honda J30 engines are considered to be reliable and durable daily drivers. The problems, however, arise from those J30s with high mileage, wear, and improper maintenance throughout their lifespan. Regardless, there are still some fault-prone components that can lead to drivers criticizing the reliability of the Honda J30 engines. For example, certain symptoms, such as unstable rpm and poor acceleration, can directly point to an EGR valve that needs cleaning or a faulty throttle body.

Furthermore, the automatic transmissions applied to Honda J30 applications are known to be weak and require complete replacement at high mileage. Lastly, Honda outsourced alternator production to an American company, which was an independent problem for the Honda J30 models. These alternators are known to fail before reaching the 80,000-mile mark, an early repair that many drivers did not anticipate.

In conclusion, the Honda J30s are known for their positive reputation due to their reliability and durability. However, the longevity of this engine series may be dependent on proper upkeep or maintenance. Yet, the J30s design is respected for a good reason. However, no engine system is bulletproof. Therefore, let’s take a look at the most commonly reported problems for the Honda J30s and the needed repairs for each.

Most Common Problems for the Honda J30 Engine

First, let’s kick off our list of most commonly reported problems for the Honda J30 engine by examining some fault-prone components before progressing into a quick examination of weak automatic transmissions, poor alternators, and nagging oil issues.

Unstable RPM can be a common occurrence for many Honda J30 drivers. This issue is most directly tied to the fact that both the EGR valve and throttle valve may simply need cleaning.

Faulty EGR valves can produce a variety of different issues for your engine system. Poor acceleration, a general reduction in power, and decreased fuel efficiency may all be symptoms of a poorly functioning or dirty EGR valve. Furthermore, improperly functioning EGR valves may increase engine emissions.

Your Honda J30 may be experiencing similar or overlapping symptoms of a faulty EGR valve. The throttle body is essentially responsible for controlling the airflow into the engine. Therefore a malfunctioning throttle body can lead to engine overheating and poor performance. Most commonly, this problem may be associated with poor idling.

Fortunately, this problem isn’t as pricey as a transmission replacement. However, alternator issues are reported to an extremely common degree for the varying Honda J30 models. As previously stated, Honda outsourced the production of alternators used within the majority of J30 engine systems to an American company (Delphi). Many drivers report that these alternators commonly fail before the 100,000-mile mark. Symptoms of a faulty or failing alternator may include:

Due to the fact that a car can only drive for a maximum of up to two hours with a broken alternator, it is imperative to repair this problem promptly.

Oil leaks and high oil consumption problems are rampant in a vast majority of different engine systems. The nagging problem associated with oil leaks is the fact that there can be numerous different causes, and they potentially may cover up more severe engine problems. Its always our golden rule to deter these issues by practicing proper maintenance, timely repairs, and the usage of high-quality oil. A few of the associated symptoms of oil leaks and high oil consumption include:

The Honda J30 engine series, and its many variants and applications, have helped the company retain a hold on the V6 automotive market. These engines span a range of 200 to 355 horsepower and are exceptional for their ability to boost power with appropriate modifications. A balanced system of supporting mods, and a good tune can really make the difference in power gains for most Honda J30 engines.

The majority of Honda J30 engines will likely be found in Accord models. Yet, the usage of this V6s is also found throughout older Acura models and further Honda configurations. Showcasing its versatility and adaptability, the J30s were then soon progressively updated into eight different variants. Those variants eventually lead to the J32 series and eventually up until J37 engines. In summary, it’s no surprise that the value of adaptability has allowed the Honda J engine series to remain on the market with continued success throughout 2022.

The overall reliability of the J30 engines is considered to be average to above average in respect of their longevity and durability. These engines offer a strong base structure for everyday drivers, or modification/customization projects as well. Regardless, the J30 engines still do have some commonly faulty components. As we stated, the low alternators generally fail before reaching 100,000 miles. The automatic transmissions are renowned for their faulty tendencies and weak structure. Faulty EGR valves may need consistent cleaning, and throttle bodies may commonly malfunction creating poor engine performance. Yet, these Honda J30 engines are still considerable options for daily drivers, especially those that practice keen timely maintenance.

Lastly, let us know in the comments below your experiences with the Honda J30 engine series!