The Honda H22A is an engine from the H series, a larger-sized performance-oriented series produced throughout the 1990s until the early 2000s. These naturally aspirated inline-4 engines have seen varying applications of success in both touring car racing as well as lightweight chassis drag racing. The utilization of an aluminum block and head helps keep these engines light while still maintaining strong structural integrity. The design of the Honda H22A was appreciated enough to be applied in a variety of different Japanese models.

Yet, the first H22A1 engine was only available to America in the 4th generation Honda Prelude. Regardless, the H series of engines successfully impacted the international automotive market for over a decade. The Honda H series of engines created a dynamic global impact. They also forever changed the progression of Honda as a manufacturer and the brand’s overall respect in the racing/high-performance industry.

Throughout this guide, we will focus specifically on the Honda H22A engine and the reach this engine has had throughout its lifespan. So what are some of the strengths and associated weaknesses of the H22A engine? Before answering some of those questions, let’s take a look at the basic engine specs and different applications of the H22A in the following sections. 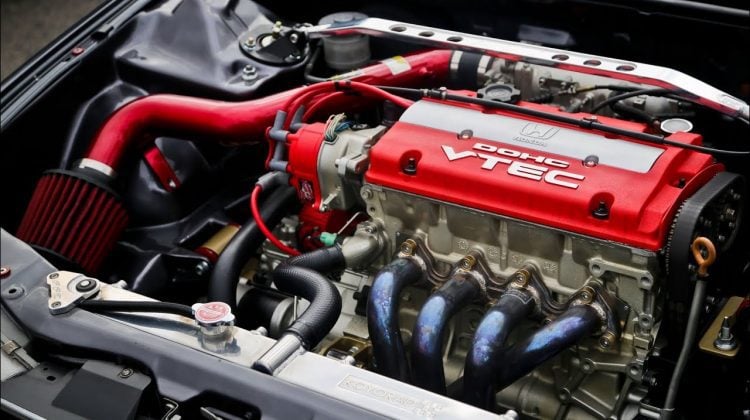 The basic specs for the Honda H22A engine are as follows below:

Firstly, The H series engines are a set of naturally aspirated inline-4s that aim to offer performance value balanced with affordability. These specs are pretty standard in terms of expectations and capability from the Honda H series. Eventually, Honda would adapt these engines design into the Honda F20B engine. The F20B was essentially a sleeved-down, cast-iron brother of the H22A. Furthermore, the F20B was eventually utilized in different international racing applications. Therefore, the H22A had a great basic structure and power output potential in its design.

Now, let’s look at the overall practicality of the H22A engine by examining the different models that utilized the engine throughout its lifespan.

What Cars Used the H22A Engine?

Initially, the Honda H22A DOHC V-tec was only available in Accord and Prelude applications offered throughout the Japanese automotive market. However, the H22A would eventually be sold to the American, Australian, and Canadian markets within certain 4th generation Preludes and VTi-r models. With that said, let’s take a look at the complete list of applications that utilized the Honda H22A engine below:

The majority of the applications of the H22A engine were within the Honda Prelude. Further variations of the H22A (the H22A2 through A8 and Z1) were adapted from the base design of the H series engine for various Honda models. These H22A engines specifically were best known for their usage in the Prelude. However, as previously mentioned, different racing and high-performance variations were also derived from these initial H-series engines, thus proving the value of the Honda H22A engine and its potential to grow into other versatile versions for future use by the brand.

Overall, the H22A engine can be considered average in terms of reliability. However, certain variables can impact the longevity and durability of the H22A engine and its variations. For example, aggressive driving is common for many of the Honda H22A applications. Therefore, due to certain popular driving styles, one can anticipate more problems and quicker wear on many engine components.

Furthermore, proper maintenance and timely repairs can deter many issues that may arise for H22A engine drivers. With good upkeep, many H22A drivers should expect to see up to 150,000 miles or so without severe or costly repairs. The balance of proper modifications and upgrades is essentially just as crucial to the overall reliability of an engine.

Preludes with engine upgrades should balance a collection of supporting mods along with a good tune. When boosting power and seeking out those higher horsepower gains, a better understanding of the Prelude H22A engine is mandatory. A complete understanding that revolves around balancing the increase in power while maintaining reliability and engine longevity should be the goal for any H22 project.

Although the H22A can be considered average to above average in reliability, there are still a variety of commonly reported problems. Most issues are a product of reaching higher mileage and wear over time. Therefore, let’s jump into some of the most commonly reported problems by drivers for the Honda H22A engine, starting with high-oil consumption and various oil leaks.

Unfortunately, one of the most prominent and reoccurring issues for an H22A engine is naggin oil leaks and high oil consumption issues. These issues may be deterred by the usage of high-quality oil and timely oil changes. Yet many oil-related problems for the H22A engine system are related to worn valve stems and piston ring failures. However, many of these leaks and high oil consumption problems may not be solely resolved by replacing valve stems and piston rings. Furthermore, these repairs might require a completely new cylinder block. Various oil leak and high consumption symptoms for the Honda H22A may include:

Worn valves can also be a culprit for an overall loss of engine power. Yet, there are a variety of different catalysts that can also be faulty in the Honda H22A engine leading to lackluster power output and associated symptoms such as poor acceleration. In addition, components such as the timing chain tensioner, oxygen and knock sensors, distributor, and our previously mentioned timing valves can all become faulty and render a loss of engine power. Therefore, a proper diagnostic test may be essential in finding the actual source of an H22A engine problem that results in a loss of overall power.

As previously mentioned, coolant leaks and abnormal coolant function can be a reoccurring problem for many H22A drivers, especially those with improperly installed modifications and higher mileage. The idle air control is the most likely catalyst for coolant leaks in the Honda H22A engine. If that component has been affirmed as properly functioning, then coolant leak issues may be more difficult to diagnose for the H22A.

This issue is also potentially a symptom of other various engine issues and, therefore, may be masking further more severe issues. Just another reminder that these nagging oil and coolant leaks must be diagnosed and appropriately repaired before progressing into larger engine problems. Various symptoms of coolant leaks in the H22A engine may include:

Throughout this guide, we aimed to examine the history and overall impact of the Honda H22A engine and its associated variations within the collective Honda H series engines. Strong, lightweight engines commonly placed in lightweight applications made these inline-4 engines popular throughout the 1990s and early 2000s. Most Prelude drivers, especially those with knowledge about modification projects, respect the H22A engine for its performance and overall potential. On paper, the Honda H22A may not come across as the most dynamic or powerful engine from Honda. However, the value and ability to boost the power output of the H22A have created a community surrounding the H series engines. A community that respects these engines not only for their legacy yet for their continued practicality and strength.

The reliability of the H22A is often respected yet is absolutely dependent on proper maintenance and usage of high-quality oil. When practicing adequate upkeep on the Honda H22A, drivers should expect a reasonable lifespan from the engine while still being driven aggressively or with a performance mindset. Sure the H series continued to adapt to become more efficient and powerful throughout its lifespan. However, Honda recognized the value of the H22A engine when expanding its utilization and availability throughout the international automotive market. Naturally, this demands the respect of any driving enthusiasts, let alone older Honda or Honda Prelude enthusiasts.

With that said, let us know in the comments below your opinion on and experiences with the Honda H22A engine!