The Honda D series is considered an extremely versatile inline 4 cylinder series that has been applied throughout a variety of older compact models. Many Civic enthusiasts will be familiar with the Honda D series. However, a variety of different models utilized Honda D engines, including the first-generation Integra. If you’re a Honda fan, check out some of our previous engine guides to find which series best suits your needs or interests. We’ve previously published guides on the Honda H22A engine, the J30, and the J37 engines. Yet, throughout this guide, we will outline and discuss the Honda D16 engine specifically, including its reliability, most common problems, and overall strengths and weaknesses.

The Honda D series was initially introduced in 1984. First, the Honda CRX utilized a 1.5L D15 engine available to the American and European automotive markets. Further, throughout its lifespan, the D series was used in the Honda Civic, CRX, Stream, Logo, and our aforementioned Integra. Only two years after the D15’s initial introduction, Honda prioritized a larger displacement. Hence the creation of the 1.6L Honda D16 engine. The higher displacement, and the availability to the global automotive market, added to the value that the D16 engine had in the tuning community. However, the D16 is still appreciated for its design foundation and usage as a reliable daily driver as well.

Accessible, affordable, and lightweight, the D16 is an appreciated and extremely versatile engine. With that said, let’s take a look at the D16’s basic engine specs and applications before further delving into its overall reliability and most commonly reported problems below. 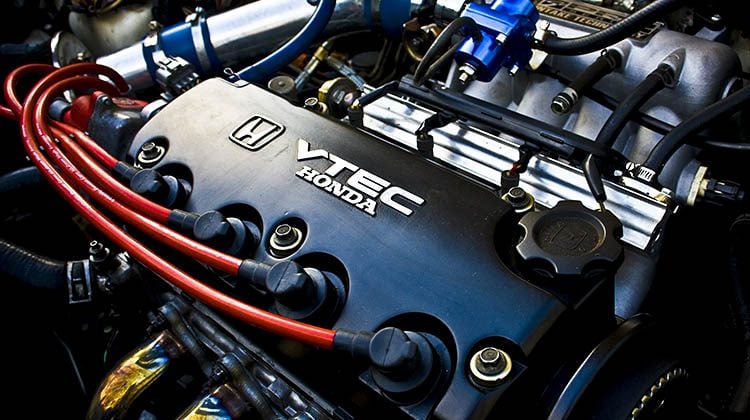 The D series was intended to be the “economy” engine series from Honda. Offering a reliable engine at an affordable price point. Aside from the average power output, the D16 is still known for its ability to boost overall performance and power values with appropriate mods and tuning.  The basic engine specs of the Honda D16 are as follows:

Many D16 engine systems utilize the Honda VTEC, increasing their overall desirability. Since these engines adhere so well to aftermarket upgrades, they are often sought out for tuning or customization projects. There are many variations of the D16 that have been produced throughout its lifespan from 1986 to 2007. Regardless, each variant comes with 16 valves and either SOHC or DOHC valvetrains. Many enthusiasts may agree that the B16 was more performance-oriented and therefore held a higher value than the Honda D series engines. However, later D16 variants with VTEC are still greatly appreciated by many tuning enthusiasts to this very day.

To gather a better understanding of the Honda D16’s overall impact, let’s now take a look at the models that utilized the D16 engine, and its many variants, in the following section below. Fair warning, there are plentiful variants of the D16 and thus a large variety of different applications.

What Cars use the Honda D16?

There are a total of 29 different variations of the Honda D16 engine. Each model and its associated production years are listed below:

Honda has collectively aimed to maintain standards of exceptional reliability throughout the majority of its engine series. Fortunately, the D16 matches those high standards of reliability. Many drivers anticipate reaching high mileages in their D16s without experiencing costly and time-consuming problems. However, reaching these higher mile-markers is dependent on practicing regular maintenance, servicing, and oil changes. With proper and timely maintenance, D16 drivers aim to reach upwards of 200,000 worry-free miles. Yet, with the addition of turbo kits and other upgrades, you might reduce the lifespan of your D16. Therefore, it’s essential to utilize reputable aftermarket parts and tunes for your Honda D16 engine project.

A variety of different problems are commonly reported for the different Honda D16 engines. Problems such as a rough idle. oil leaks and various fault-prone components can impact the Honda D16’s respectable overall reliability. With that said, let’s now jump into our list of the most common Honda D16 problems.

In the next sections we will discuss the above Honda D16 common problems in greater depth. It is important to note that not all of these issues will be prevalent for D16 drivers. However, these problems are consistently reported enough to make our list of impactful D16 issues.

This issue is most commonly a product of a dirty throttle body or idle control valve. Fortunately, this usually means a quick cleaning can deter any rough idle issues. Additionally, a failed or compromised 02 sensors may be the culprit for many D16 systems experiencing a rough idle or poor acceleration. Rough idle may be difficult to diagnose considering the wide variety of potential causes. Some of the various catalysts of rough idle for the D16 may include:

Since a rough idle can be indicative of many differentiating engine problems, this issue may be a symptom of more severe engine issues. Therefore, we find it imperative to diagnose and repair any engine idle issues before they develop into more severely costly issues.

Unfortunately, this problem is one of the most commonly reported issues for Honda D16 engine systems. Generally, the substitution of a crankshaft or sheaves should ultimately solve this problem. However, there can be a variety of different issues causing prematurely worn crankshaft sheaves. Some of the symptoms that may indicate a poorly functioning crankshaft harmonic balancer include:

Improperly functioning crankshafts can result in sporadically occurring engine problems. Again, crankshaft issues can have a variety of different catalysts. Just making this issue another difficult problem to diagnose upon our list. Regardless of the Honda D16’s exceptional reliability, many drivers report problems surrounding crankshaft components. Therefore, its crucial to identify and repair these issues before they create more costly annoying problems for your Honda D16 engine system.

Considering the low compression of the Honda D16s, these engines respond well to turbocharging. Sure, the D16 also responds to bolt-on mods. However, the largest power gains are a product of more substantial and costly installations. Many consider the D16 to be overshadowed by many other Honda constituents. Yet, these engines have garnered popularity for their ability to respond to modifications and upgrades. The accessibility of aftermarket parts is rampant for the D16 and its many variations. Just another reason why it is often favored as an engine swap or customization project. In summation, some of the most commonly applied stage 1 Honda D16 modifications include:

Many of these stage 1 modifications may be considered hefty or costly installations when compared to other engine systems. Yet, with the lackluster power and extreme potential that the stock Honda D16 possesses, many enthusiasts see these as the necessary first step in boosting your D16’s power. Furthermore, stage 2 modifications may include:

In summation, stage 3 upgrades and modifications for the Honda D16 may include:

Objectively speaking, these stages of modifications will vary for many drivers due to price and accessibility. Regardless, our rule of thumb suggests that the larger and more costly modifications will require substantial knowledge of supportive mods in order to sustain engine durability and longevity. Still, the Honda D16 is an extremely respected engine system within the modding community for its adaptability and power-boosting potential.

Throughout this engine guide, we highlighted the plethora of Honda D16 variants and their associated applications. We also listed some of the most common problems and the D16’s reliability verdict. Impressively durable, affordable, and lightweight, these Honda D16s dynamically impacted the overall history of the Honda brand. The D16 might often be less recognized and respected when compared to other Honda engine series. The Honda J series and the B series may have outshined much of the D engine’s impact. Regardless, the D16 had an extremely wide arrangement of uses and a long lifespan for Honda.

Availability and affordability are two of the strengths that carry the Honda D16 into many discussions continuing through 2022. The potential for boosting the overall power of the D16 is attractive to many modding enthusiasts. Unfortunately, many of those higher power gains are the bi-product of substantial and costly modifications that many bolt-on upgrades simply won’t achieve.

With a production run spanning the mid-1980s to the early 2000s, the D16 engine has stapled itself into the history of Honda. In America, the D16 was only available as a single cam. Japan saw the ZC variant, which applied dual overhead cams. This is just another reminder of how versatile the many variants of the D16 engine were. With the mass of differing global applications, and their success, it’s hard to scrutinize the Honda D16 engines too much.

Let us know in the comments below your experience with the Honda D16, or D engine series as a whole!