The Gensis G70 was first introduced in model year 2018 and featured two different engine variants: a 3.3L twin-turbo 6-cylinder, and a 2.0L turbo inline-4. A diesel engine is also available in various overseas markets. The G70 shares the same chassis and engine options as the Kia Stinger.

While Gensis may be aiming for a more luxury appeal to the G70, don’t underestimate it’s performance capabilities. The 3.3L engine offers significant power potential, capable of handling near 500whp with simple bolt-on mods. Additionally, the smaller 2.0L engine, while not quite as capable, can still unlock great power gains with basic upgrades.

This guide is going to focus on the best performance upgrades for all G70 models. Since both the 3.3L and 2.0L are turbocharged, these mods apply to both engines. However, the power gains we discuss with each mod will be applicable to the 3.3TT only since it is more heavily modified. The best mods for the 2.0T are still the same, power gains will just be slightly less. 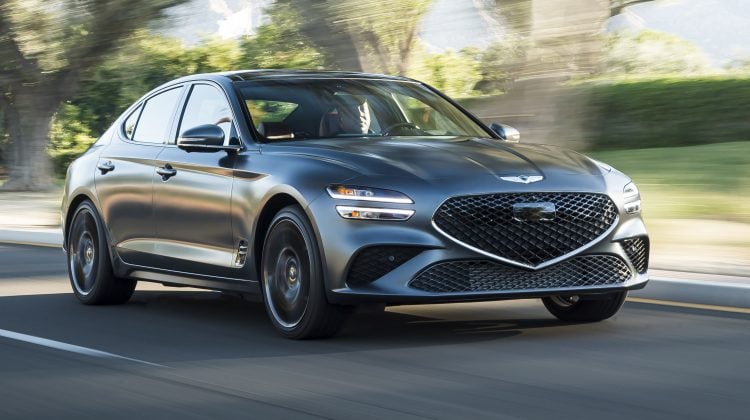 Before we get into the best G70 mods, let’s talk about power potential. The 3.3L Lambda II engine is incredibly stout and can handle significant power levels without the need for serious internal or block upgrades. A stock G70 will dyno around 350whp, with serious power potential left on the table for the taking.

The stock turbo on the G70 can handle approximately 475-500whp before it needs to be upgraded. With that being said, the mods on our list below can get you to these levels easily, and affordably. If you want to push past these levels, you’ll need to look into upgraded turbo kits.

The stock internals and block are good for an impressive 800whp. Therefore, you can safely break into turbo upgrades without having to worry about block or internal upgrades. However, getting to these power levels will require some additional investment into fueling and custom tuning.

Before tuning the G70 we recommend upgrading your spark plugs. The 3.3 twin-turbo engine is known to blow spark plugs and misfire frequently when tuned and running stock spark plugs. Colder spark plugs burn cooler which helps prevent pre-detonation and spark plug blowout from overheating. We recommend using 1-step colder plugs for any tuned G70 pushing 500whp or less. Once you shoot for upgraded turbos and surpass these power levels, we recommend going 2-steps colder. Colder plugs don’t create more power but they will help your tuned engine run smoother.

A tune is the best performance modification for a Genesis G70, hands down. Tunes usually run around $500 and can add near 100whp and torque. Therefore, a tune alone can push you into the 425whp range, offering the best price per hp of any mod on our list.

A tune is going to provide power gains by increasing the amount of boost the turbos are running. Since the stock turbos can handle about 500whp, they can be cranked up a good amount which is what allows for these big power gains. A tune is also a great first mod since it helps optimize power gains from additional mods. A good tune will adjust engine variable likes fueling, timing, and so on to maximize power from other mods.

You can run a tune on the G70 by itself without any other mods. However, if you plan on running an aggressive map then we do recommend making a few additional upgrades on this list, like an intake and intercooler, to help support the turbo and its additional boost.

Burger Motorsports JB4 is a piggyback tuner, which means it spoofs the ECU rather than completely altering it like a flash tune would do. This means you can uninstall it without leaving any trace that it was there (for warranty purposes and such). Burger is one of the best names in tuning, and we use their Jb4 products extensively on a lot of our BMW’s. They also have tuners available for the 2.0T.

The JB4 plugs into the ECU and offers a range of different maps and tunes. You can switch between maps on the fly while driving making it super user friendly. It is compatible with E85 and has bluetooth connectivity for data logging and monitoring as well.

Our second favorite G70 performance upgrade is a cold air intake. Adding a tune will increase boost levels. More boost and more power requires more air. The factory intake is fine on a stock G70, but once you increase boost it begins to become restrictive. Upgrading the intake will allow for more air flow which will increase the efficiency of the turbo and reduce the stress on it while also providing solid power gains.

We recommend open in takes in which the air filter is directly exposed to the engine bay. The alternative option is a closed intake where the filter sits within an enclosed box. Open intakes will have greater airflow improvements than closed systems which results in better power gains. Closed systems do result in lower IATs by a few degrees, but this is pretty much irrelevant due to the intercooler. Therefore, we recommend optimizing airflow gains and going with an open system.

Burger Motorsports offers one of the best bang-for-the-buck intakes for the G70, at only $379. This intake uses S&B filters and has dual heat shields to minimize intake air temps without sacrificing air flow. Burger claims 27whp and 28wtq gains when used in conjunction with their JB4 tuner than we discussed above.

Downpipes are the first exhaust component in the G70. They bolt directly to the turbochargers and house the catalytic converters. The factory downpipes are the most restrictive part of the G70 exhaust system because of the cats. The cats are filled with metals to help reduce emissions, however, this also blocks airflow. Since these downpipes are connected directly to the turbos create a lot of backpressure in the exhaust system.

Backpressure puts a negative force on the turbos turbine wheels, making it more difficult for them to spin. This puts extra stress on the turbos and reduces efficiency, making it harder for the turbos to spool and hit the higher boost targets from the tune. Additionally, if you have an intake installed backpressure will increase further due to the extra air being brought into the engine.

Since backpressure is bad for performance, we recommend upgrading the G70 downpipes. On an otherwise stock G70 high-flow or catless downpipes probably won’t provide much in the way of gains. However, once tuned downpipes will provide decent power gains and also offer reliability improvements. Backpressure causes higher EGTs and puts more stress on the turbo which decreases reliability and causes the engine to run hot.

Your two options for downpipes are catless, or high-flow catted. Catless downpipes are technically illegal but offer the best power gains and the most backpressure reduction. High-flow downpipes keep your car legal (except in California) and passing emissions at the sacrifice of power and slightly higher backpressure.

Catless downpipes will give you about 10whp gains. High-flow will provide about 5whp gains. You will also get a slightly louder exhaust note with catless options, but the sound gains won’t be huge.

If upgrading the downpipes is a no-go for you, you can instead upgrade the midpipe and catback. This won’t provide much in the way of power gains or turbo efficiency, but it will reduce some backpressure and will also give you a louder exhaust note.

The stock intercooler is a big performance inhibitor for the Genesis G70. It is surprisingly small for a twin-turbo engine that has serious tuning potential. Once tuned, the factory intercooler gets heat soaked very easily which causes a loss in power. Upgrading the G70 intercooler will provide more cooling capacity and increase power while also preventing power loss from heat soak during back to back pulls, aggressive driving, or track days.

An upgraded intercooler will usually have both a larger core, end tanks, and surface area. The larger core and end tanks allows for more air capacity within in while the larger surface area increases its cooling ability. Heat soak can cause power losses up to about 30whp, so upgrading the intercooler is a great way to prevent power loss. And on top of it you will also see about 10whp gains from the cooler air temps.

Heat kills engines so an intercooler is not only good for performance but also one of the best mods for reliability.

Similar to tunes and intakes, Burger Motorsports provides our favorite intercooler on the market. It is built in the US, offering extremely high quality and an affordable price point. The intercooler is significantly bigger than the stock one and is capable of handling 800whp. It also is compatible with meth and CPI injection. It is a direct bolt-on also for easy install.

To push past 500whp you will need to upgrade your turbos. Once you do so, fueling will become a performance inhibitor and must be upgraded as well. You can get to 500whp easily with a tune, intake, downpipes, and an intercooler. Therefore, this is really only important for people looking to push beyond that.

The first option is to run full E85, or a blend of E85. The stock HPFP and LPFP are going to need to be upgraded which can make this a rather expensive route to go. E85 blends will add 20whp-30whp and running full E85 will provide 50whp+ gains. So you’ll need an upgraded HPFP, LPFP, and a flex-fuel kit.

Fueling is a bit more of an advanced topic so we are going to leave it here for now. Stock fueling gets tapped out around 500whp, so if you are looking beyond this you will need to consider chargepipe injection and fuel pump upgrades.

A tune, intake, downpipes, and intercooler can easily push the 3.3L G70 to around 500whp, and can be done for around $2,000. The stock turbos are good for around 500whp and the stock fueling is also good for these power levels. However, the 3.3L G70 is quite capable and is estimated to be safe up to around 800whp on the stock block and internals. But to break into these levels you will need the mods on this list in addition to turbo and fueling upgrades.

This guide and the associated power gains have been geared towards the 3.3L. However, all of these mods are also applicable to the 2.0T G70 since both are turbo engines. The 2.0T can’t handle quite as much power but can still see good gains from some basic bolt-on mods. These same mods will still add about 100whp to a stock 2.0T.