The Ford Triton engine family, also known as the modular engine family, is a 6.8L V10, 5.4L V8, and 4.6L V8 that have been used in various Ford trucks and performance cars since the 1990’s. Each of the individual engines has been produced in 2-valve and 3-valve configurations with a few 4-valve’s being produced for high performance vehicles. Unfortunately, the Triton engine family suffers from a few problems. The timing chains are known to be problematic across a lot of them. However, one of the more prominent issues is with spark plugs.

Triton engines suffer from both spark plug blowout and broken spark plugs. With spark plug blowout, the plugs are known to actually eject from the spark plug holes and blow through the head causing a lot of damage along the way. With broken plugs, they are prone to breaking in half during removal leaving you with half a spark plug in the cylinder, making it a very difficult task to get it out.

This article is going to discuss each of the Triton spark plug issues, which engines suffer from problems, and both repair and preventative maintenance tips. 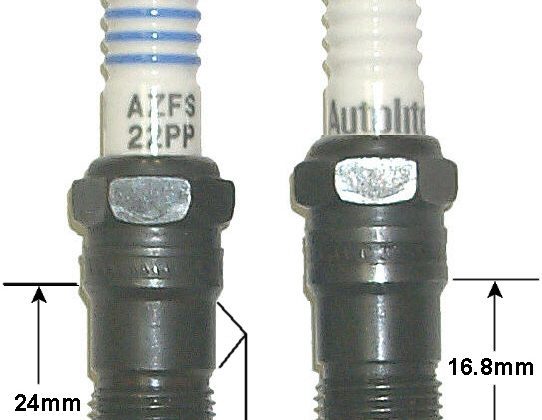 The spark plugs in the 2-valve Triton are extremely short. They only have about 4 threads on them compared to tradition spark plugs that have 8-12 threads. The lack of tread length means that they aren’t held into the cylinder very securely.

Ultimately, this is an expensive problem to fix as it causes some significant damage and requires machining work.

What Triton’s Have Blowout Problems?

Fortunately, spark plug blowout is specific to the 2-valve Triton’s and also most common in the 6.8L V10 and 5.4L V8. The 2-valve 4.6L V8 doesn’t really happen to have this problem as frequently, however, it can still happen.

While some of the 2-valves were produced beyond 2002, Ford fixed the plug blowout issues in 2003 so this problem is only common on 2002 and older 2-valve Triton engines. In 2003 Ford gave the 2-valve’s a new head design and extended the length of the spark plugs which fixed the problem. There have been a few cases of blowout on 2003+ models but we wouldn’t say it is very common at all.

Unfortunately there really isn’t a simple method to preventing blowout. It is in part caused by heat within the engine so preventing overheating and keeping engine temps low will help. However, the only guaranteed way is to remove the use a thread repair kit which essentially bores out the spark plug hole to replace it with a heavier duty thread sleeve.

While the plug blowout issue was fixed in the 3-valve Triton engines, another plug related problem arose. The 3-valve Triton engines are prone to having the spark plugs break in half when trying to replace them. The main reason for these problems tends to be the replacement interval. Ford gave them a 100,000 mile replacement interval which is very long for a spark plug.

Additionally, the spark plug is steel while the head is aluminum which causes corrosion and rusting of the plug. And then the spark plug is a 2-piece design which makes it prone to breaking in half. When you combine the rust with the 2-piece design, the plugs tend to get stuck in the hole and then snap in half when you put pressure on them trying to remove them.

The issue here is that removing the half-broken plug from the hole is very difficult. Mechanics at shops even have issues getting the broken ones out. So while this doesn’t really cause any damage that is expensive to fix it can end up costing a good bit in labor to actually get out.

Spark plugs breaking is common across 3-valve engines from 2004 until 2008. The problem tends to occur most with the 4.6L engine in the F150 and Mustang, but is also common in the 5.4L as well. The V10 Triton has had a few issues but it doesn’t tend to be as common on these bigger engines.

The easiest way to prevent issues with broken plugs is to change them more frequently. The 100,000 mile service interval results in the plugs going years and years without being changed which leads to rust and corrosion.

If your plugs do break during removal you will need to get a removal kit. Lisle sells a removal kit that is one of the most frequently used on the market.

To help simplify and consolidate the information above we will discuss which engines and what years have each of the above problems.

While the 4.6 V8 isn’t usually referred to as a Triton engine, it is a part of the same Triton modular engine family. It was produced from 1991 until 2014 and have 2-valve, 3-valve, and 4-valve versions of the engine.

Spark plugs issues with the Ford 4.6 V8 are:

Spark plug issues with the 5.4 Triton are:

The V10 Triton was the largest engine in the Triton or modular engine family. It was used as the alternative to the 6.7 Powerstroke for the Super Duty F250 and F350 trucks. It had the longest lifespan lasting all the way until 2019 when it was replaced by the 7.3 Godzilla. Unlike the other two engines it was only produced in 2-valve and 3-valve designs.

Problems with the Triton V10 spark plugs are:

While there were a few issues with the 3-valve plugs breaking it doesn’t seem to be as big of an issue on the V10 compared to the smaller 4.6 and 5.4 Triton engines. So while it can happen it isn’t really common enough for us to list it here.

The blowout issues only affected the 2-valve engines up thru 2002 when it was fixed thereafter. Unfortunately there isn’t much to do to prevent this other than to use a repair kit to address the issue before it happens. If it happens first it can cause some costly damage as it will take out the cylinder head with it.

The plugs breaking was an issue from 2004-2008 with the 3-valve engines. While Ford fixed the blowout issue by using longer spark plugs it gave each of the engines a 100,000 mile service interval. Heat and wear and tear causes the plugs to rust and corrode and eventually break during removal making it a tough job to get the plug out of the hole. The best fix here is to change your plugs more frequently to prevent them from corroding and getting stuck in the cylinder.