Throughout this engine guide, we closely examine some of the pros and cons associated with the Ford Ranger 2.3L Ecoboost engine. The 2.3 Ecoboost is generally a reliable engine with many positive attributes. However, no engine is perfect outright, and the Ford Ranger’s 2.3L EcoBoost does have some minor identifiable flaws in terms of overall design and performance.

The 2.3L Ecoboost engine was initially introduced to the automotive market in 2015 applied to the Mustang and Lincoln MKC models. However, the Ford Ranger first saw the 2.3L Ecoboost applied in 2019. These smaller inline-4 engines use a twin-scroll turbocharger helping boost their overall power. The Ford Ranger has long been associated with reliability and longevity. Yet, do the 2.3 EcoBoost editions still maintain those standards of exceptional durability? This article will find out if those standards are still maintained. Further below, we will examine the Ford Ranger 2.3 EcoBoost’s engine value and identify some of its most common problems.

A 2.3 Ecoboost Ranger shouldn’t have substantial problems reaching the 200,000-mile mark. As per usual, this is dependent on proper maintenance and repairs. With 270 horsepower and 310 lb-ft of torque, these smaller-sized truck engines aim to deliver efficiency and power for a reasonable price without compromising the Ranger’s reputation. However, throughout this guide, we will focus on both the 2.3 Ecoboost engine and the newer generation of Ford Ranger’s reliability independently. Now, let’s take a further dive into how the Ecoboost Rangers compare to previous Ford models and what the Ranger’s current reputation specifically is post-2019. 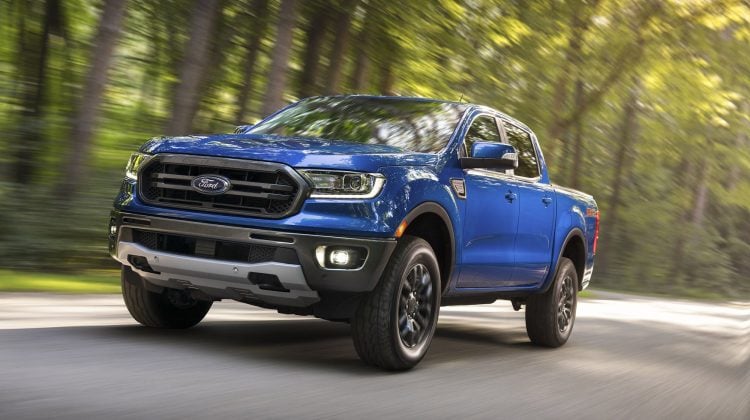 First, let’s take a look at the basic specs of the Ford Ranger’s 2.3L Ecoboost Engine:

On paper, the 2.3L Ecoboost has sufficient power considering its size. The Ford Ranger was considered the smallest truck offered by Ford until the Maverick was introduced in 2022. The standard Ranger has a towing capacity of 3,500 lbs ranging up to an advertised 7,500 lbs for upgraded models. That is plenty of power for those seeking to tow RVs or alternative vehicles, as the average weight for many RVs on the market today is around 5,200 lbs.

An aluminum block and head help reduce overall weight without ultimately compromising structural integrity. However, one of the more prominent issues with this engine can be blown head gaskets. Throughout the following section, we will examine failed head gaskets, and various other commonly reported problems for the Ford Ranger 2.3 Ecoboost. Again, no engine is perfect, and regardless of the benefits of the newly applied Ecoboost for the Ranger, it also has its flaws. For more information about a larger Ecoboost application in Ford trucks, check out our previous article on the Ford 3.5L Ecoboost versus the 5.0 Coyote in F150 models.

Now, let’s dive into some of the most common Ford Ranger 2.3 Ecoboost problems below.

Let’s be honest; Ford never aimed to create the most powerful small to a mid-sized truck when it originally designed the Ford Ranger. Yet, what the Ranger lacks in power it makes up for in reliability and practicality. The 2.3L Ecoboost isn’t bulletproof, but it does score impressive points in the durability department.

As the 2.3L Ecoboost engine ages, a few more problems are becoming evident. It’s important to note that this engine series has had an above-average reputation over the past few years in the many different models it is applied to. Aside from early Mustang and Focus RS models, the 2.3L EB has not had many severe issues. However, certain aspects of the 2.3L Ecoboost can be considered weak. As we discussed, the head gaskets can be prone to failure. With that said, let’s take a further look into some of the most common problems starting with head gasket failure.

Regardless of the 2.3 Ecoboosts above average reliability rating, head gasket issues are one of the most common problems with the Ranger. Many drivers consider this to be a hot topic for debate because head gasket issues can be blown out of proportion throughout internet reports. Yet, we find it important to mention the presence of gasket failures in the 2.3L Ecoboost.

Primarily this issue was most commonly found in earlier applications of the 2.3L Ecoboost engine. Some Focus RS models and earlier Mustang models ran into blown head gasket issues and coolant leaks. The Ford Ranger itself does not seem to have as many issues surrounding the head gaskets as smaller models produced by Ford in the early life of the 2.3L Ecoboost (2015-2017). However, the cost of replacing a blown head gasket can range upwards of thousands of dollars. Therefore if the issue ever does occur in the newer Ranger models, it can be a huge nagging pain.

Various symptoms will arise indicating problems with head gaskets, hopefully in time for a driver to detect before they are blown. First, engine overheating can be one of the indications of this issue. Following that, drivers may experience many different problems such as bubbling in the radiator and coolant reservoir, coolant loss without blatant leaks, discoloration of engine oil, and even smoke emitting from the exhaust.

It is crucial to try and acknowledge and repair any of these symptoms listed below in hopes of catching head gasket issues before they are blown and require a pricey repair.

Since blown head gaskets can directly cause engine overheating, let’s now look at the other various issues that can contribute to an overheating 2.3L Ecoboost.

Before we dive into issues with 2.3L Ecoboost running hot, it’s essential to note that Ford has made some design changes to prevent this issue. At first, many early models reported a hot undercarriage causing problems with the exhaust. This problem was so severe that Ford recalled an earlier version of the 2.3L Ecoboost’s application. Fortunately, this recall was only applied to 2015 Mustang models, and problems surrounding overheating seem to be less prevalent in the newer Ranger models.

Regardless, it is extremely important to acknowledge any high increase in exhaust temperatures before they cause more severe engine issues. Since the recall, many 2.3L Ecoboost is running at much more normal expected temperatures. However, running hot is still an important issue for the 2.3L Ecoboost, including the Ford Ranger models. Luckily, Ford has done an excellent job designing their efficient intercoolers to try and combat these issues. Engine overheating is much more prevalent in modified 2.3L Ecoboost engines that have been driven aggressively. Again, this is an important reminder to practice proper maintenance and repairs and to research and install good supportive mods on custom engines.

In conclusion, below are the most common symptoms for overheating in the Ford Ranger 2.3L Ecoboost engine.

Finally, let’s take a look at our last most common problem for the Ford Ranger 2.3L Ecoboost. Coincidentally, another problem that may produce engine overheating issues and reduce power and performance.

Carbon buildup isn’t necessarily a product of poor engine design. Poor maintenance and low-quality oil are both substantial contributing factors to this problem. Deposits of carbon will continue to build upon the engine valves over time if not appropriately maintained. This buildup will harden over time on internal engine components until cleaned or further damage occurs. Again, it is absolutely essential to use high quality and practice regular engine maintenance to deter this issue.

Now, let’s take a look at a list below of the most common symptoms for carbon buildup in the Ford Ranger’s 2.3L Ecoboost engine.

Fortunately, after some of Ford’s initial recalls and solutions, many drivers report the 2.3L Ecoboost to be a very dependable everyday driver. Two of the main problems we focused upon (blown head gaskets and carbon buildup) are rare enough for us to keep the overall reliability of this engine rated as above average to very good. Furthermore, even the examined engine overheating issues are becoming less frequent in the current generation of Ford models that use the 2.3L EcoBoost engine. Therefore, it is hard to scrutinize an engine too badly that balances both durability and efficiency in its versatile applications. For more information on overall problems associated with the Ford 2.3L Ecoboost engine, take a look at our previous article on the most common 2.3L EB problems.

The Ford Ranger seems to be a good application for this engine. The model benefits from a lightweight, efficient engine with enough power to still support a stock towing capacity of 3,500 lbs. 270 horsepower and 310 lb-ft of torque aren’t considered insanely powerful for modern trucks. Yet, the Ranger is still an effective and efficient choice for those seeking a reliable truck in the current automotive market. We expect these engines to reach 200,000 miles without severe problems occurring. Again, this is dependent on many variables, including proper maintenance, diligent repairs, and the extent of aggressive driving. Upgraded options for the Ford Ranger can extend its towing capacity upwards to 7,500 pounds. However, the Ford Ranger 2.3L Ecoboost stock option is still an excellent choice for drivers who need a durable, efficient everyday engine that still accomplishes the needs of most truckers.

Let us know in the comments below your opinions or experience with the Ford Ranger 2.3L Ecoboost engine. Does it stand up to its predecessors? We think it’s a great option with a balance of efficiency, reliability, and substantial power.