The Ford Ranger was never historically built to be a powerful truck. Prior to its revival in 2019, it never produced more than 207hp and 238tq. However, when Ford revived the Ranger in 2019 it was given the 2.3L EcoBoost. While this might sound small compared to its previous 4.0L V6, the small inline-4 EcoBoost produces 270hp and 310lb-ft. of torque. For those looking for additional power and performance, it’s fortunately easy and inexpensive to find given the turbocharged nature of the 2.3L EcoBoost.

An upgraded downpipe is one of the best mods for the 2.3L Ford Ranger. A downpipe is a component of the exhaust system that bolts up to the turbo and is highly restrictive. Upgrading the Ranger with a less restrictive downpipe will reduce exhaust backpressure and improve power and responsiveness.

This guide is going to discuss what a downpipe is, the performance benefits of upgrading the Ranger downpipe, and the difference between catted and catless options. Additionally, we’ll finish it off by recommending a few of our favorite 2.3L Ranger downpipes on the market.

What is a Downpipe? Ranger 2.3L EcoBoost

Naturally aspirated engines, like the first three Ranger generations, use an exhaust manifold and headers. The headers usually then bolt-up to a mid-pipe that houses the catalytic converters. On turbo engines, like the 2.3L Ranger EcoBoost, the exhaust manifold bolts to the turbocharger, which then bolts to the downpipe which houses the catalytic converter.

The downpipe is the first component of the Ranger’s exhaust system. Since it houses the catalytic converter it is the most restrictive part of the exhaust. Therefore it creates the most exhaust backpressure. Backpressure is bad for any engine but it’s especially bad for turbo engines. Since the downpipe bolts directly to the turbo the backpressure has a big impact on the turbo and its efficiency.

Backpressure impacts the turbo’s ability to spool. It creates a force against the turbine wheel making it more difficult to spin. Power gains from a downpipe predominantly come from the reduction of backpressure. Removing backpressure allows the turbo to spool more quickly and more efficiently which therefore leads to power gains. The less backpressure, the better the power gains. An ideal exhaust system would be no exhaust system, but that obviously isn’t realistic.

It’s also worth noting that power gains are the best when a downpipe is combined with a tuner. A tuner increases the psi or boost of the turbo and therefore the benefits of the reduced backpressure are magnified leading to bigger power gains.

In addition to the power gains you’ll also notice better throttle response, quicker acceleration, and a moderate increase in the exhaust sounds. A downpipe is also a great reliability mod as it helps improve the health of the turbo itself and the whole engine via lower exhaust gas temps.

Catless downpipes offer the greatest reduction in backpressure and therefore the largest power gains. However, this comes at the price of making your Ranger illegal from an emissions perspective. High-flow downpipes probably produce about 5whp less but they will pass emissions testing in most states.

High-flow catted downpipes still offer a significant improvement over the OEM downpipe. Because of this we generally recommend sticking with catted options. Unless you are planning on upgrading your turbo and pushing serious power, the backpressure reduction from a catted downpipe is sufficient. Dealing with the headache of having a car that won’t pass emissions really only makes sense if you need the extra performance out of the downpipe.

The one downside however is that catted options are more expensive since cats use expensive metals inside them. The flip side is that you probably won’t be able to find a catless downpipe for sale from any reputable store online now since most companies have stopped selling them.

Overall, catless offers the best bang-for-the-buck and most power gains but at the sacrifice of emissions. High-flow options offer solid power gains and keep your car legal.

As mentioned above, finding catless options is very difficult. You will probably have to look on forums and buy a used set or try to buy a set under the table from a manufacturer if they have any left. Most catted downpipes are legal in the US, but make sure you check and confirm first. Regulations vary state by state, like with California for example where any emissions modifications are illegal.

There are a number of options on the market. We prefer the more budget-friendly options that don’t sacrifice quality. At the end of the day a downpipe is a piece of metal, and although it does have a cat in it, it just isn’t worth $1,000+ in our minds. 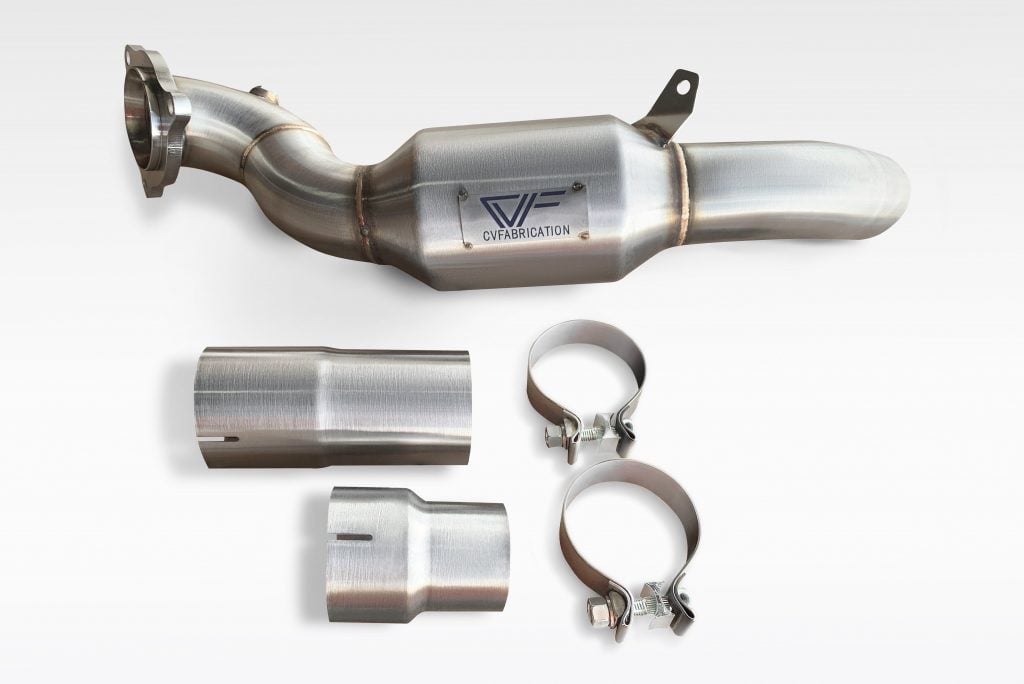 CVF offers a great high-quality catted downpipe for the Ranger. In our opinion, they offer the best combination of price, performance, and quality on the market. The downpipe is a 3″ piping made of 304 stainless steel with a 400-cell catalytic converter. With a lifetime warranty and a $450 price point, this is hands down the best bang-for-your-buck your going to find for a catted downpipe.

This downpipe will add a slightly more aggressive exhaust note. Since it’s catted the exhaust sound gains will be pretty modest which is good for anyone wanting to keep their exhaust on the quieter side of things. It’s also a direct bolt-on for both the OEM exhaust and any aftermarket exhaust so no issues if you have an aftermarket cat-back exhaust.

This is the best price you’ll find on the market for a catted downpipe and is only about $150 more than a catless one would be which is great. Also, you can use the code ‘TUNINGPRO’ at checkout and save about $20 on your order.

CVF is the only company we are aware of that manufactured a catless downpipe for the Ford Ranger. However, they no longer sell it on their store. I’m not sure whether or not they have any left that they could sell you under the table.

However, you might be able to find a couple of these for sale second hand on the forums or an online marketplace. Their catless downpipe is the best bet for anyone who wants a catless option, you’ll just have to do some searching to find one.

The only other downside to catless that we didn’t mention above is you will have to DIY the install. Finding a shop to install catless downpipes nowadays is pretty much impossible. And the only consideration here is that DIY’ing the install is a bit tricky since there isn’t a ton of space to work with. Getting the stock downpipe off is the biggest challenge and will require some decent skills.

An upgraded downpipe is one of the best performance mods for the 2.3L Ford Ranger. With a tune and a high-flow catted downpipe you can get near 15whp and torque gains which is pretty good for just $450.

We recommend high-flow catted downpipes since they are still a huge improvement over the stock downpipe and eliminate the headache of having an illegal exhaust system. Catless downpipes really only make sense for track use or anyone who is trying to push the power limits of the 2.3L EcoBoost Ranger. You’ll get a slightly louder exhaust note from a downpipe upgrade, but it will be a subtle sound increase and nothing super loud or obnoxious.

Overall, if you’re looking for a little extra power out of your Ranger we highly recommend putting a CVF downpipe on it. If you want additional gains try combining a downpipe with a tune and an intake.