An upgraded intake system is one of the best first modifications you can make to your Mustang 2.3L. On turbocharged engines such as the 2.3 EcoBoost, upgraded intakes provide significantly more performance benefits and horsepower gains compared to naturally aspirated engines.

When you compare the power gains to the cost of an upgraded intake, an intake has one of the cheaper $ per horsepower compared to other mods. Additionally, when a cold air intake is combined with a tune, such as the Burger Motorsports JB4, and other mods (such as upgraded downpipes), the performance benefits amplify as increased airflow is the foundation of power creation.

If you are interested in unlocking more power in your Mustang 2.3 EcoBoost, check out our guide on the top 5 performance mods for 2.3 EcoBoost Mustangs.

The term cold air intake is more traditionally used for Japanese vehicles in which the intake air filter is relocated to be lower to the ground, usually within the front bumper. The thought process of this style of intake is that air further away from the engine will be colder. However, the location of the intake on a turbocharged engine is somewhat less important.

What is more important is Open vs. Closed intake systems. With that being said, on your 2.3 Mustang the name of the intake system is pretty much irrelevant.

An intake system is considered “open” when its air filter is completely open to the engine bay and not enclosed. On the contrary, a closed system will have the filter enclosed within a housing or box.

Open intake systems will provide more air flow to the 2.3 EcoBoost since there is less restriction around the filter itself. While closed systems provide slightly less airflow, the air they send into the intake system is more highly pressurized.

Closed intake fans will say that an open intake will pull in warmer air. Open intake fans will tell you that the enclosed nature of a closed system results in reduced air flow. Both of these are true. We are generally fans of open intake systems since the increased airflow is beneficial for additional modifications while the increased intake temps really don’t matter on turbocharged engines with intercoolers, especially if you have an upgraded intercooler.

Overall, the performance differences between the two are virtually zero. If you plan on adding additional mods we recommend the open intake. The last point that I will make is that open intakes make more noise and have a cool “whooshing” sound to them that you won’t get with a closed system.

Benefits of a Mustang 2.3 EcoBoost cold air intake include:

The factory Ford Mustang 2.3 EcoBoost intake is efficient on stock engines. As such, power gains will likely fall on the lower end if your Mustang doesn’t have any other mods. However, once you start tuning and adding other upgrades then airflow demands increase. With proper mods you may see gains of 10-20+whp with a Mustang cold air intake.

A 2.3 EcoBoost intake upgrade will also improve throttle response and help turbo spool. This benefit is minimal but some may notice the difference. Additionally, an intake upgrade can add some awesome turbo and induction noises.

There are dozens of intake options out there for the 2.3 EcoBoost Mustang. We are going to cover a few of our favorite intakes from reputable brands. With that being said, most intakes are generally the same and don’t differ much from manufacturer to manufacturer. The most important thing is determining whether you want an open or closed intake.

Also please note that some intakes have different fitments for 2015-2017 Mustangs and 2018-2021 Mustangs. We are only linking to one intake system so please be careful that you are ordering the correct intake system before purchasing. 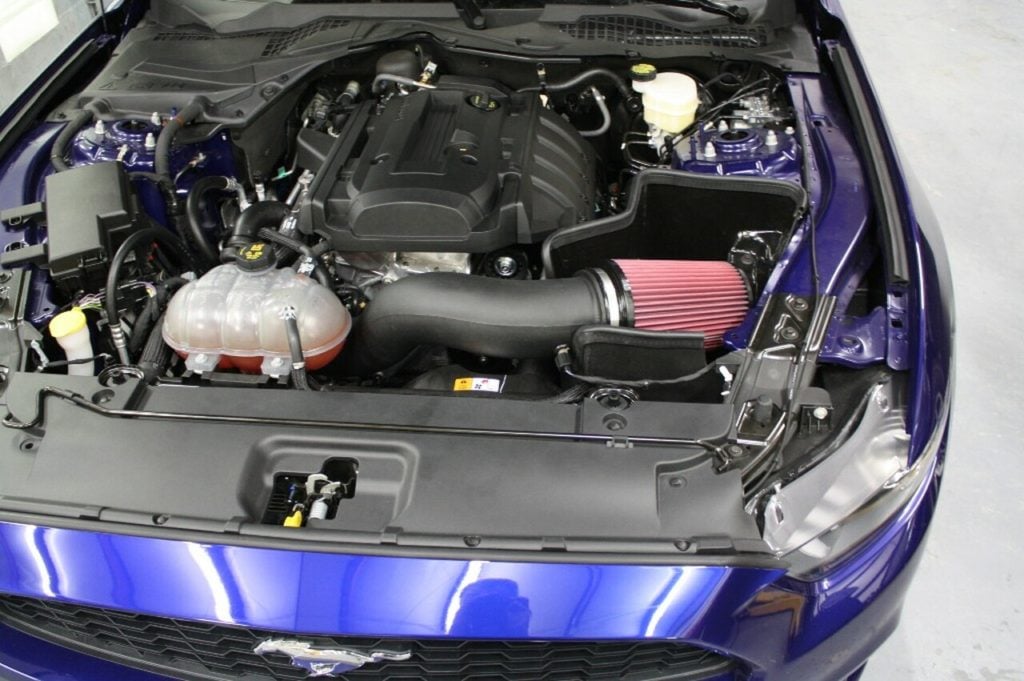 The JLT Cold Air Intake for the 2.3 EcoBoost Mustang is an open intake design. However, the intake does feature a heat shield which is wrapped around the outside of the intake to shield off the high temperatures from the engine block.

The JLT Mustang intake has a 5″ filter and bolts directly up to the stock 2.25″ turbo inlet. A cool added feature is that the intake steps up to a 4″ piping so that the intake is compatible with an upgraded turbocharger and larger inlet sizes. The filter itself is made by S&B which is one of the highest quality filter manufacturers around.

JLT claims 15-20whp gains from the intake. While you can’t always trust the manufacturer quoted power gains, we believe gains greater than 15-20whp are capable when combined with a tune, such as the Burger Motorsports JB4. 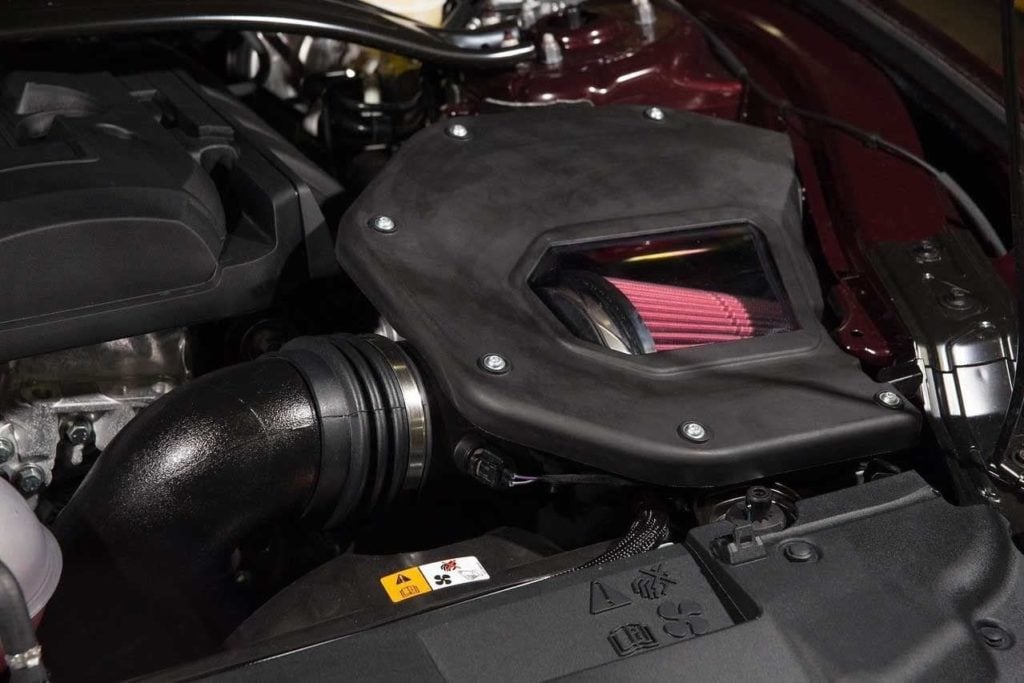 For 2015-2017 models, the Roush intake is an open air design. 2018-2021 models got a slight revision to the intake design which is a closed intake design. One of the biggest benefits of Roush products is that they do not void any factory warranty since they are manufacturer-backed products.

Both the open and closed systems bolt directly up to the stock intake location. Roush claims the intake is 74% less restrictive than the stock system. Dyno charts from Roush imply a nearly 30whp and 28wtq power gains from the intake kit alone without any additional modifications.

Roush has the same “step-down” coupler for easy use with upgraded turbochargers. 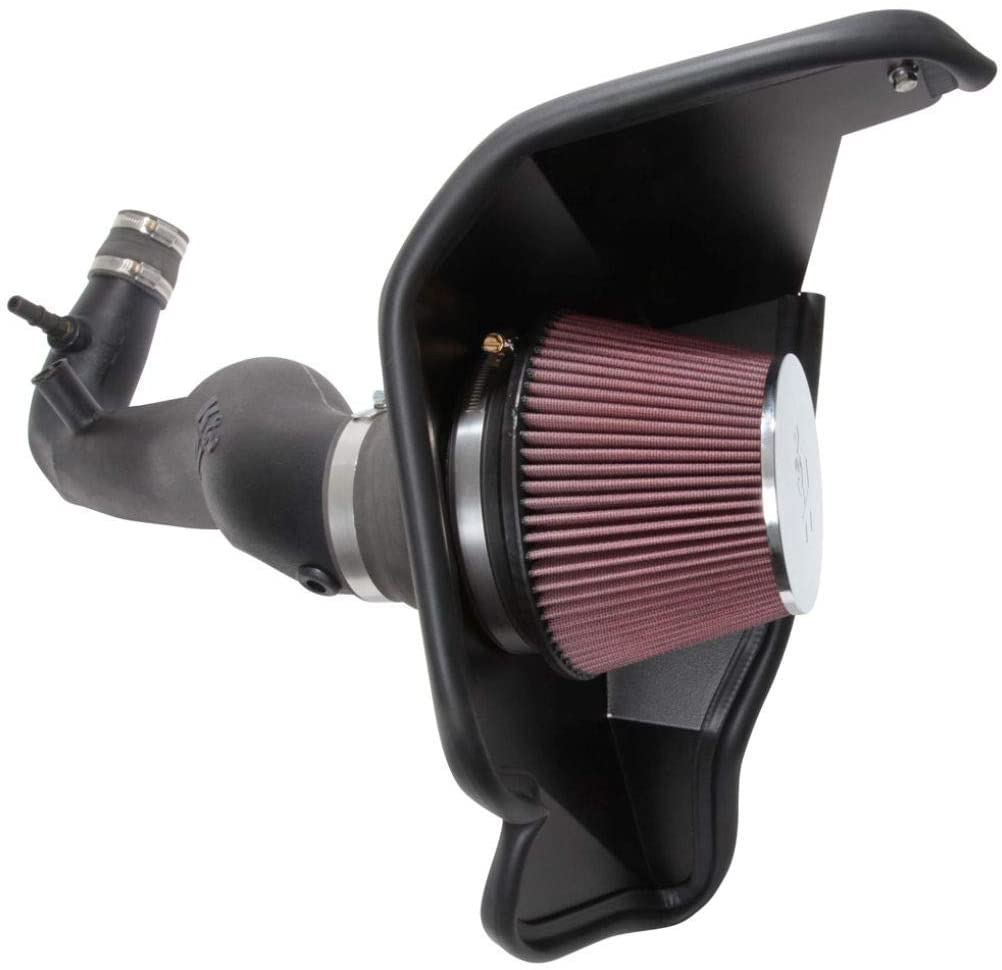 K&N is one of the most well-known brands in the performance intake and filter market. At the ~$300 price point, it is one of the less expensive options for the 2.3 Mustang. Similar to the JLT intake, the K&N one is an open-air system and features a heat shield to block the filter from hot engine block temps.

The filter is shorter and fatter than those of the other systems but provides the same benefit of increased airflow over the stock system. K&N claims horsepower gains of 19whp. The design and is exactly the same for all 2015-2021 models and installation is very easy and a direct bolt-on. Fitment does differ slightly from 2015-2017 and 2018-2021 so be careful to purchase the proper fitment intake system.

The more air that is drawn into the engine, the higher the pre-turbo air pressure is, meaning the turbocharger doesn’t have to work as hard to compress the air. The benefit of an upgraded intake on a turbocharged engine is astounding. Increased airflow reduces restriction and improves turbo efficiency which allows for faster turbo spool and better throttle response.

Adding an intake to your 2.3 EcoBoost is crucial if you plan on adding a tune. When you increase the turbo boost pressure, more air is required to be drawn into the engine and turbo to be compressed. With a restrictive stock intake, your turbo will be overworked trying to compress the air to the higher boost levels. The overall result is less power gains and a less reliable turbo.

When it comes to upgraded intake systems there really is no wrong answer. All of them perform the same task: sending more air into the engine. Again, we like open air systems but closed systems perform just as well and won’t have any limitations on power or performance.

The most important piece is upgrading your stock intake and increasing airflow; not the brand or intake you choose.