We wrote a guide about the best 2.3 Mustang EcoBoost bolt-on mods here. Downpipes made that list and remain one of our favorite bolt-on upgrades for turbo engines. There are tons of benefits to running a downpipe upgrade on the Mustang EcoBoost. We touched on that slightly in the previous article. However, this time around we expand on the benefits of Mustang EcoBoost downpipes. We’ll also compare catless vs catted downpipes and discuss a few of the best downpipe mods for the 2.3L EcoBoost. 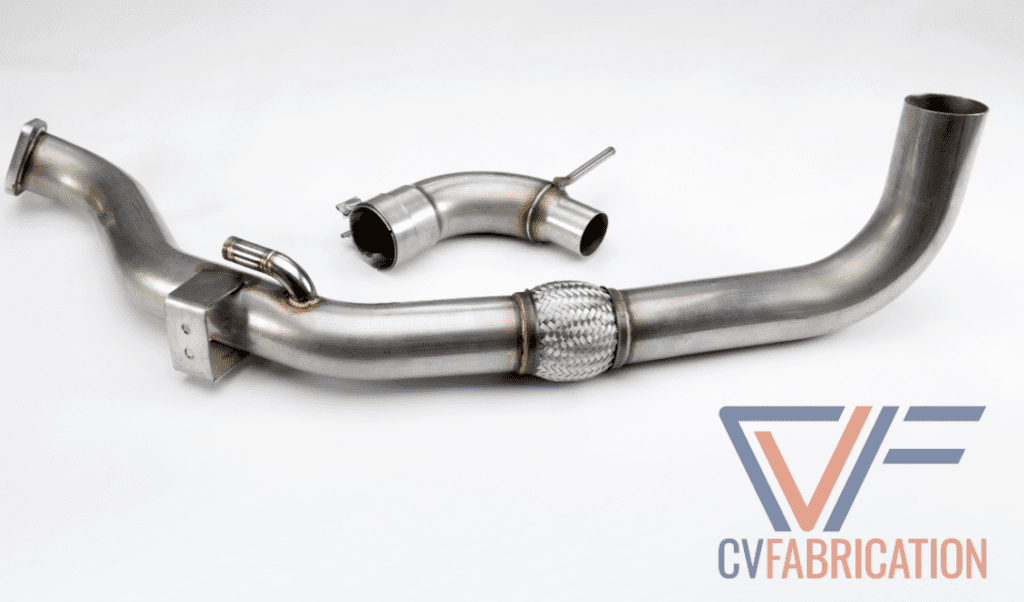 What is a Mustang Downpipe?

A downpipe (DP) is the part of the exhaust that runs from the turbocharger to the cat-back. This part of the exhaust is unique to turbo engines. Most turbo cars – as with the Mustang 2.3L engine – use a catalytic converter in the downpipe. It causes a major restriction since it bolts directly to the turbo. That’s really all there is to a downpipe. It runs from the turbo to the cat-back and features a cat.

Due to the location near the turbo it’s the most important part of a turbo engines exhaust. Compared to the rest of the post-turbo exhaust a downpipe offers the biggest performance gains.

The catalytic converter (cat) in the OEM EcoBoost downpipe helps reduce emissions. It does a great job at that. Unfortunately, the cats are also highly restrictive and hurt power and performance. Pressure drop from pre to post-turbo plays a big role in a turbos ability to spool. As such, reducing back-pressure after the turbo allows for quicker spool and more power. No exhaust after the turbo is actually the best exhaust on a turbo engine.

However, that’s not exactly a realistic proposal for street cars. That’s where catless and high-flow catted downpipe upgrades come into play. They will help reduce the Mustang EcoBoost 2.3L engines back-pressure and free up horsepower.

Catless DP’s are less restrictive as they completely remove the cat from the downpipe. As such, a catless Mustang EcoBoost downpipe will result in the best power, torque, and spool. However, catless downpipe options come with a couple downsides. The 2.3 EcoBoost likely won’t pass emissions testing with a catless DP. They’ll also add a bit more sound and smell compared to catted downpipes.

The smell and sound difference is pretty minimal, so we wouldn’t let that scare us away. Emissions are likely the primary concern for most. In this case, you’ll likely be best suited to a catted downpipe.

Otherwise, we highly recommend opting for a catless Mustang EcoBoost downpipe. They offer the best bang for the buck without question. High-flow DP’s are often about twice the price and offer slightly less performance. However, they remain a great choice for those who want some more power without possibly breaking emissions laws.

A few benefits to running upgraded downpipes on the 2.3 EcoBoost include:

Big power gains are likely the biggest selling point of downpipe upgrades for the Ford Mustang 2.3L. Both catted and catless options will provide the same pros above. Though, a catless downpipe will out-perform a catted DP in all areas. Expect to pick up around 10-20 wheel horsepower with catless downpipes. Higher gains may be possible depending on other mods and tuning. Regardless, EcoBoost power gains with a catted downpipe will be about 5whp less than catless. Torque gains will be about the same as power.

Again, the drop in pressure will also help the turbo spool faster due to the lower back-pressure. That reduction in pressure also helps keep exhaust gas temps (EGT’s) lower. All that said, there are clearly tons of advantages to running an upgraded downpipe on the 2.3L turbo Mustang.

Exhaust and engine sounds can be a bit of a touchy subject for the 2.3 Mustang EcoBoost. As a small 4-cylinder engine it doesn’t offer the typical American muscle car sounds. However, a catless downpipe will help bring some more sounds out. Whether or not people like the sound is personal preference.

Anyways, a catless DP will definitely add a deeper, more aggressive note to the Ford Mustang’s exhaust. It’s mainly noticeable on a cold start or under heavy throttle. Once the engine is warm the idle will sound pretty similar to stock (assuming the rest of the EcoBoost exhaust is stock). Additionally, while cruising normally the DP sounds are hard to detect. Point is – they offer a bit of a louder exhaust note without becoming annoyingly loud or intrusive.

*Sticking with the theme, high-flow DP’s are louder than stock but to less of an extend than catless.

With all that out of the way, let’s move onto a few of our favorite Mustang EcoBoost downpipe upgrades. We’ll list some catless and catted DP options. It’s important to note – this is by no means an exhaustive list. Tons of companies make aftermarket downpipes for the EcoBoost. These are simply a few that we believe offer the best balance of price, quality, and performance.

CVF offers a great option for 2.3L EcoBoost owners looking for a catless DP. It’s also a 3″ downpipe, but it includes a 2.25″ adapter to bolt up to the stock cat-back. They also offer the choice for a 3″ adapter for those running an aftermarket exhaust. CVF downpipes are made from stainless steel. They’re also a popular choice with proven quality and performance.

Again, this is a catless downpipe which may be the only downside for some. Be cautious going this route if you live in a state with strict emission laws. Otherwise, the CVF Mustang EcoBoost downpipe is a great choice. It’s tough to beat the price and it definitely offers the best bang for your buck on this list. Fortunately, for those looking for a catted option, CVF offers one of those as well which we’ll cover below.

Fortunately, CVF offers a great 3″ catted downpipe for those looking to keep their cars a bit more emissions friendly. Similar to their catless option, the catted downpipe is the best bang-for-the-buck on the market offering the best combination of price, quality, and performance.

Similar to other 3″ options, you’ll need to use a 2.25″ adapter to bolt this to the stock cat-back unless you upgrade to something like the MBRP 3″ cat-back system. This is the best catted system you’re going to find without breaking your wallet. CVF is a great brand with strong quality and fitment making it one of our favorite brands for EcoBoost mods.

This is one of the less expensive downpipes when it comes to catted options. The 3″ BBK downpipe steps down to 2.25″ for direct fitment to any stock or 2.25″ cat-back exhaust. BBK DP’s offer a little bit of a trade-off. To help make these downpipes more affordable they’re made from aluminized steel. It’s a little more prone to rusting when compared to stainless steel. They should still hold up well, especially in states or countries where rust is less of a concern.

We definitely prefer the stainless steel options, but the BBK downpipe is still a good choice for the price. It comes in at $499.99, which is cheaper than most catted DP options around.

Upgraded downpipes are an excellent mod for just about any turbo engine. That holds true for the Ford Mustang 2.3L EcoBoost engine. A catless downpipe offers power gains in the ballpark of 10-20whp. Expect about 5 horsepower less with high-flow catted DP’s. You’ll also notice quicker turbo spool and a better all-around power curve. Additionally, catless and catted downpipes will add a slightly deeper, more aggressive note to the Mustang EcoBoost.

Those looking for a catless downpipe will enjoy the great price, quality, and performance from the CVF 3″ catless downpipe. If you’re concerned with emissions check out the catted downpipe option from CVF as well. Corsa, BBK, and tons of other companies have some solid choices as well but they are quite a bit pricier. Regardless of your choice, it’s hard to go wrong with Mustang EcoBoost downpipe upgrades.

What’s your experience with EcoBoost DP’s? Are you considering one?