The Ford Ranger and Maverick were excellent additions to Ford’s truck lineup. Modern 1/2 ton trucks, like the F-150, often deliver more capability than the average truck buyer needs. Enter the Maverick vs Ranger. These trucks don’t offer as much capability, but they’re both great trucks that can get the job done for less money. Their smaller size also makes them easy to park and drive around a crowded city. Which truck is the better buy, though? In this article, we compare Ford Ranger vs Maverick specs, performance, towing, price, and more. 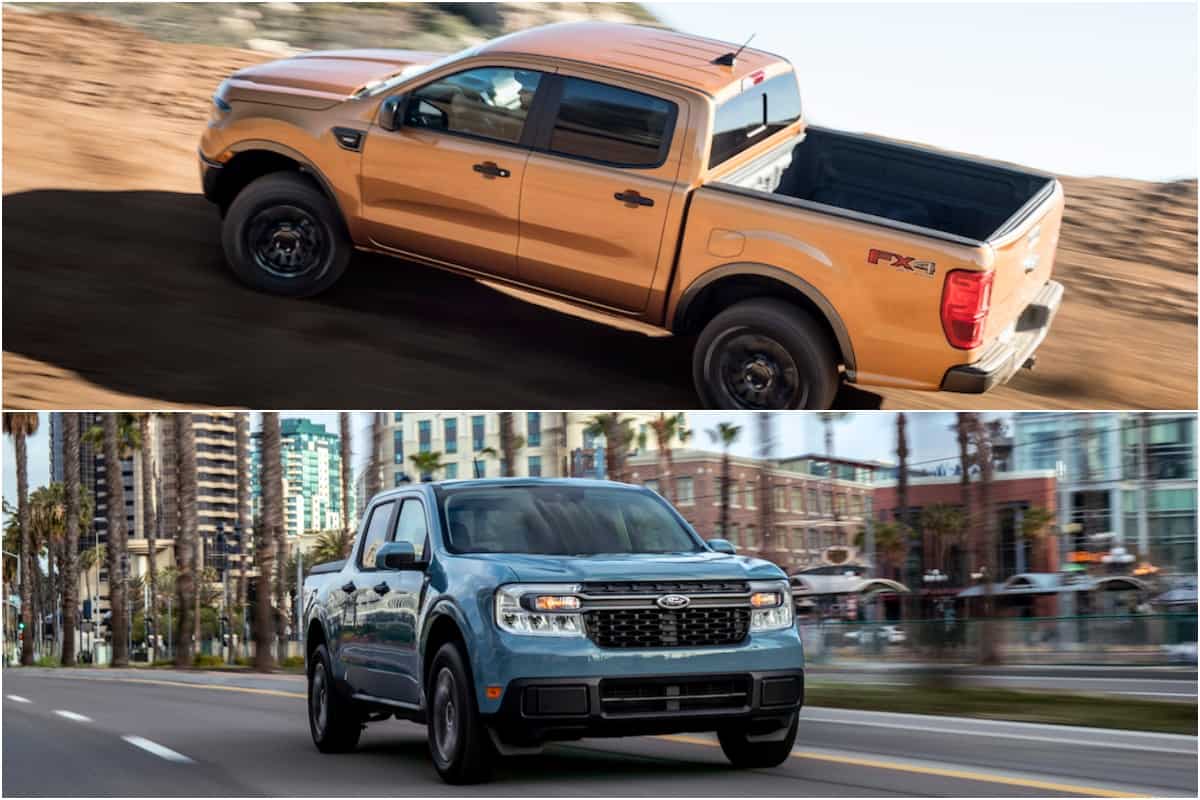 Specs for the Maverick and Ranger are:

*Ford Ranger pickups were also made from 1983-2012 as a compact truck. Actual towing and payload capacity depend on options. These numbers represent the max towing and payload; not all trucks are able to tow or carry these max loads.

Of course, this isn’t an exhaustive list of specs for the two trucks. However, they paint a good picture of the Ford Maverick vs Ranger comparison. The Ranger is a mid-size truck while the Maverick fits in the compact pickup class. It’s almost a foot longer than the Maverick and weighs about 500 to 800 pounds more.

The larger Ranger truck boasts a more powerful engine, 10-speed transmission, and delivers better towing and payload capacity. It slots in nicely between the larger, more capable F-150 and the entry-level Maverick.

Both trucks offer an engine from the EcoBoost family. The Ranger receives the 2.3L inline-4 EcoBoost as the standard engine; it’s currently the only engine option for the Ranger. On the other hand, a Maverick comes standard with a 2.5L Atkinson-cycle inline-4 hybrid engine. This engine is only available with FWD. If you want AWD or the advanced 4×4 then you’ll need to select the 2.0L inline-4 EcoBoost engine.

The 2.0 EcoBoost delivers 250 horsepower and 277 lb-ft of torque. It’s not too far behind the larger 2.3 EcoBoost with its 270hp and 310 lb-ft. Ultimately, the Maverick with the 2.5L Hybrid engine is going to deliver the best fuel economy but lags behind in performance.

A Ford Ranger SuperCab and SuperCrew are both 210.8″ long compared to 199.7″ for the Maverick SuperCrew. Bed length is 61-73″ long and 54.4″ long for the Ranger vs Maverick, respectively. Bed width is also about 2″ wider on the Ranger.

Given the smaller size of the Maverick it weighs about 500 to 800 pounds less than the Ranger. The difference in size isn’t massive. However, the larger Ranger does offer more bed space and a longer wheelbase. This certainly favors the Ranger for handling “truck stuff” whereas the Maverick is more maneuverable for parking and city driving.

The Ranger vs Maverick are close enough in interior space that it’s unlikely to be a major deciding factor. Most of the Rangers larger size is on the exterior hence the 6.5-18.5″ additional bed space.

As a compact truck, the Maverick is built on the same chassis as the Ford Escape. That’s part of the reason the Maverick delivers towing capacity closer to a small SUV or crossover. It comes it at 4,000 pounds maximum towing capacity; only 500 lbs higher than the Escape. It’s also lower than the Audi Q5 and BMW X3 towing capacity of 4,400 lbs. However, the Maverick does beat those SUV’s in payload capacity. Ford’s Maverick can handle up to 1,500 lbs whereas the aforementioned SUV’s are rated in the low 1,000’s.

On the other hand, Ford’s Ranger is rated up to 7,500 lbs. That’s in-line with large SUV’s like the Navigator & Suburban, and better than other mid-size trucks like the Chevy Colorado. It’s enough to tow most boats under 25 feet and plenty of other common trailers and toys.

The Maverick certainly pales in comparison with its towing capacity. However, the Maverick is still plenty for the needs of most. It will suffice for trailering things like dirt-bikes, ATV’s, small boats, jet skis, etc.

MSRP for the 2023 Ford Maverick and Ranger models is as follows:

The F-150 is also included to show the difference between these smaller trucks and a true 1/2 ton pickup. Ford’s smallest truck – the Maverick – clocks in about $5,200 cheaper than the Ranger and $12,200 less than the F-150. Rangers roughly split the difference between the Maverick and F-150. This isn’t only true for price but also for other differences like power, towing capacity, size, etc.

A Ford F-150 is going to deliver the best towing, performance, power, and overall capability. The Maverick is the worst in those categories while the Ranger falls right in the middle. Ultimately, these trucks are well-priced for each of their purposes.

Ford did an excellent job slotting the Ranger vs Maverick into their pickup truck lineup. Modern 1/2 ton trucks are often overkill for the needs of most truck owners. Heck, the 2023 F-150 can tow up to 14,000 lbs when properly equipped. If you don’t need insane towing capacity but need a bed (or just like trucks for the many conveniences) then the Ranger vs Maverick can be great choices.

The Maverick is a compact pickup and the smallest truck in Ford’s lineup. It offers two engine options and up to 250hp and 4,000 lbs towing capacity. Ford’s Maverick is a good truck for those who need something compact with good interior space and a truck bed. However, it might not be quite enough for those who plan to put their truck hard at work.

Enter the Ford Ranger. This mid-size trucks slots nicely between the larger F-150 and smaller Maverick. With the 2.3 EcoBoost and 270 horsepower it delivers solid performance. It’s capable of towing up to 7,500 lbs., has a larger bed than the Maverick, and offers a max payload of 1,905 lbs. The Ford Ranger is certainly the better pick if you’re looking to do lots of “truck stuff” like loading the bed or towing larger loads.

In essence, the Maverick vs Ranger serve different markets to some extent. The Maverick isn’t overly capable but it still offers the many conveniences of owning a truck. Meanwhile, the Ford Ranger delivers more capability but its larger size make it less fuel efficient and less convenient around the city.