Since their debuts in 2015, the Ford 2.3 vs 2.7 EcoBoost engines have built solid reputations for themselves. Initially, some Ford enthusiasts were skeptical of their smaller displacement and turbocharged aspiration. However, both the 2.3 and 2.7 EcoBoosts have quieted most critics by delivering smooth and easy power while maintaining high levels of reliability and longevity

The 2.3 L EcoBoost is most commonly associated with the 2015+ Ford Mustang and 2016-2018 Ford Focus RS. The 2.7L EcoBoost, on the other hand, powers both the 2015+ Ford F-150 and 2021+ Ford Bronco. The 2.3L is an inline-4 and the 2.7L is a V6, but they actually have a surprising amount in common. They both share modern tech like direct injection and twin-scroll turbos, and they both have similar performance specs.

This guide covers everything you need to know about both the Ford 2.3L and 2.7L EcoBoost engines. Below, we will look at their history, reliability, performance, and of course, potential mods and upgrades. Get ready, let’s dig in and really take a hard look at both of Ford’s high performance EcoBoost engines. 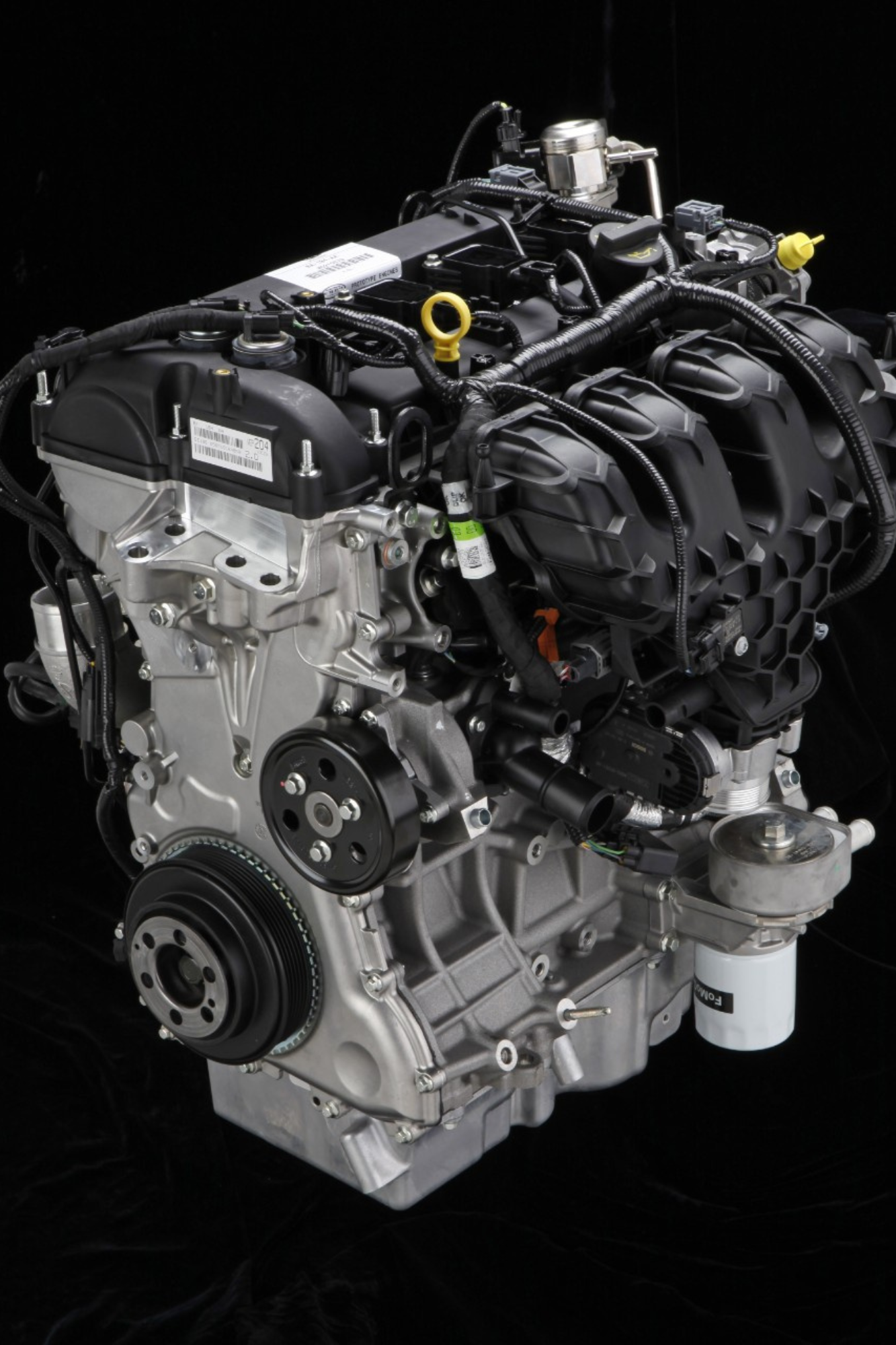 Ford initially started developing their EcoBoost engines in the late 2000s, and their idea was simple enough. They wanted to make smaller engines, with direct injection and turbochargers, that could deliver the same horsepower and torque output as their larger displacement predecessors. In addition, the smaller engines and direct injection also meant better fuel economy while decreasing emissions outputs.

Both the Ford 2.3 and 2.7 EcoBoost engines made their debuts for the 2015 model year. They each boasted over 300-hp and critics immediately commended their exceptional power delivery and larger power band. Ford initially only put the 2.3L in the Mustang and Lincoln MKC models, and they put the 2.7L in the F-150 and Edge Sport models. Both of the engines are manufactured at Ford plants in Cleveland and Lima, Ohio, making them all completely American built.

In 2018, Ford made slight updates to both engines, upping the power and adding internal improvements to the 2.7L. Ultra high performance versions of the 2.3L have found their way into some pretty fun race cars, as both the 2017 Dallara Stradale and 2016+ Zenos E10 R feature upgraded versions of the engine. Both engines are still in full force for 2022, and they show little sign of slowing down.

The Ford 2.3 and 2.7 EcoBoost engines have both similarities and differences. The Ford 2.3 L EcoBoost is derived from the previous generation 2.0L engine that was in the Ford Focus ST and Fusion.. It features the same bore, but Ford increased the stroke – giving it the larger 0.3L of displacement. It is an aluminum block, inline-4, with direct injection and a twin-scroll turbocharger running 17-20 PSI of boost. The 2.3L has a forged crankshaft and connecting rods, a high pressure oil pump, piston cooling jets, and a 9.5:1 compression ratio.

The 2.3L also has oversized exhaust valves, as well as high flow cylinder heads with an integrated exhaust manifold. Ford combines these with a revised intake manifold to seriously increase the flow over the outgoing 2.0 L. The 2.3L is the largest displacement 4 cylinder Ford has ever produced, as well as the most powerful.

Ford created the 2.7L EcoBoost as a very unique engine. It shares the same direct injection and twin-scroll turbocharged aspiration of the 2.3 L, but has other massive upgrades. For one, it employs a twin-turbo design instead of a single turbo, but they combine to make a similar 17-19 PSI of boost. The block on the 2.7 is also very different. It is a two-piece block, with the top being made of compacted graphite iron, which is the same material Ford uses for their 3.0 and 6.7 Power Stroke engines. The bottom block is die-cast aluminum and also has ladder-frame strengthening for reinforcement around the cylinders.

The direct injection in both the 2.3 vs 2.7 EcoBoost is one of their most important aspects. Gasoline direct injection, or GDI or DI for short, is actually a relatively old technology that Bosch first developed in Germany in the 1950s. However, it did not become popular in mass production vehicles in North America until the mid-2000s.

The downside to GDI is the much higher manufacturing costs, as well as the added complexity of the systems. GDI fuel injectors are much more expensive than their standard counterparts, and GDI systems also add an extra fuel pump. There is the standard in tank fuel pump, as well as a high pressure fuel pump directly upstream of the injectors and fuel rails. Unfortunately, these high pressure fuel pumps have not always shown to be reliable, and they are expensive to replace. In addition, DI engines are subject to carbon build up on the intake valves.

Overall, both the 2.3 and 2.7L EcoBoost engines are extremely reliable and consistent. Granted, they have only been out for seven years, but so far they have proven very durable. Neither engine has significant flaws, and we consider both to be above average in terms of reliability. For both engines, 200,000+ miles should not be considered out of the question.

Proper maintenance and adhering to the OEM maintenance schedule is key to having a long lasting EcoBoost engine. Those with modded or tuned engines should be doing maintenance at even smaller intervals to compensate for the increased stress. There have been some isolated cases of catastrophic engine failure with low mileage, but those are pretty big outliers. Anybody with a properly maintained and taken care of EcoBoost should feel very confident about its reliability and longevity

Previously, we have looked at common problems on both the 2.3L EcoBoost and the 2.7L EcoBoost, so make sure to check those guides out. Here, we will just briefly summarize both of those guides.

The carbon buildup is a natural and expected result of the EcoBoost’s DI system. For 95% of EcoBoost engines, the carbon buildup will make no difference. However, in some severe cases it can cause misfiring, rough idling, and power loss. The solution to carbon buildup is walnut blasting the valves, but the problem will continue to return no matter what.

For the 2.7L EcoBoost, the biggest problems are oil pan leaks, spark plugs & ignition coils, and carbon buildup. The spark plug and ignition coil issues come from the turbocharged aspiration. Turbo engines have high cylinder pressures, which increases stress and wear on ignition components, like coils packs and spark plugs. These EcoBoosts are known to go through them relatively quickly, making them common issues.

We have looked at the design and reliability of the EcoBoost engines, so now let’s talk about their most important aspect: performance. It’s no secret that both these EcoBoost engines are renowned for their smooth and efficient power delivery.

The 2.3L EcoBoost is available with anywhere from 270-350 hp and 305-350 tq – depending on the model and performance options. The DI and twin-scroll turbo combine together to make for very early peak torque delivery, which makes the car jump off the line and throw you back in your seat from the instant you press the gas. It can do zero to 60 mph in just 5.0 seconds, and the ¼ mile in 13.8 seconds at 99 mph. The 2.3l EcoBoost is ultra responsive, even in the non-performance models, and easily mimics its larger displacement predecessors.

The 2.7L EcoBoost can be had with 315-330 hp and 350-415 tq, again depending on the model and generation. The horsepower stayed the same from the first to the second generation, but Ford pushed the torque over 400 for the first time on the EcoBoost. The towing capacity on the first gen 2.7L EcoBoost is 8,500 lbs, and the second gen is capable of an incredible 10,100 lbs. The second turbo on the 2.7 really improves the engine’s torque output and curve, allowing for maximum towing capacity while staying reliable.

Speaking of turbos, the twin-scroll design of the turbos on both the 2.3 vs 2.7 EcoBoost also aids performance. The point of the twin-scroll design is to separate the exhaust gas pulses coming out of the exhaust manifold into two ports, or scrolls, which separately feed into the compressor wheel. This creates smoother flow from the exhaust into the turbo, which allows for better cam timing and more pulse energy. Ford’s tuning utilizes this, in conjunction with DI, to massively increase power output and efficiency on the EcoBoost. It results in earlier peak torque and a flatter curve, while increasing horsepower throughout the power band.

Now that we’ve looked at the performance of the EcoBoost engines, let’s look at some application specific upgrades. The 2.3L EcoBoost is capable of handling about 350-whp and 425-wtq, while the 2.7L EcoBoost can handle a considerable amount more, closer to 450-whp and 475-wtq. So make sure to keep those limits in mind when modding.

The 2.3 L EcoBoost is most prominently featured in the 2015+ Ford Mustang EcoBoost and the 2019+ Ford Ranger. The most important aspect of upgrading the 2.3L is improving the turbo efficiency and flow, which these mods prioritize. Luckily, we have already extensively looked at upgrading both the Mustang EcoBoost and Ranger with the 2.3 engine. Since we already have several guides on the topic, I’ll just link to them here and summarize them.

Putting these mods together will combine performance with reliability to make an incredibly powerful 2.7L that should not lack reliability – until you start pushing too much power. In addition, check out our F-150 specific guides on intercoolers, intakes, and downpipes. We also have a F-150 2.7 L EcoBoost FAQ guide, so check that out too.

Overall, both the 2.3 and 2.7 EcoBoost engines are full of modern tech that delivers incredible performance and outstanding reliability. They are both more than capable of pushing past 200,000 miles with proper maintenance and care. Which is the best fit for you? It depends on your needs and what application you like the best.

The 2.3L is more prominently featured in performance models, like the Mustang and Focus ST, and is the best option for those looking to go fast. It lacks the torque of the larger displacement and twin-turbo 2.7L, but it still provides impressive power delivery and response. It also gets better gas mileage than the 2.7L and has more aftermarket support for upgrades.

Ford put the 2.7L in SUVs and trucks that are less performance oriented and more designed for increased towing. As such, those looking for more work oriented or family vehicles capable of towing trailers and RVS should definitely seek out the 2.7 EcoBoost. Lots of towing capacity, up to 10,000 lbs for the second generation 2.7L, while still delivering quick power delivery while driving around town.

Do you have either a 2.3 or 2.7 EcoBoost engine, or are you looking at purchasing a car or truck with one? Are you interested in performance upgrades or do you already have some experience?
Let us know in the comments below!