The Ford 1.0 EcoBoost inline-3 cylinder engine made its debut in the 2012 Ford Focus, C-Max, and B-Max. It’s primarily an international engine with only a small number of Focus models in the US receiving the 1.0L engine. Its small size offers great fuel economy and efficiency at the cost of power; the 1.0 EcoBoost only delivers 84-140 horsepower.

Despite low power the 1.0L inline-3 is still a good engine. The Ford 1.0 EcoBoost won 6 straight international engine of the year awards for the sub 1.0L category. Displacement is actually 999cc making it eligible as a sub 1-liter engine. Anyways, no engine is perfect and that applies here too. In this guide, we discuss Ford 1.0 EcoBoost specs, problems, reliability, and more. 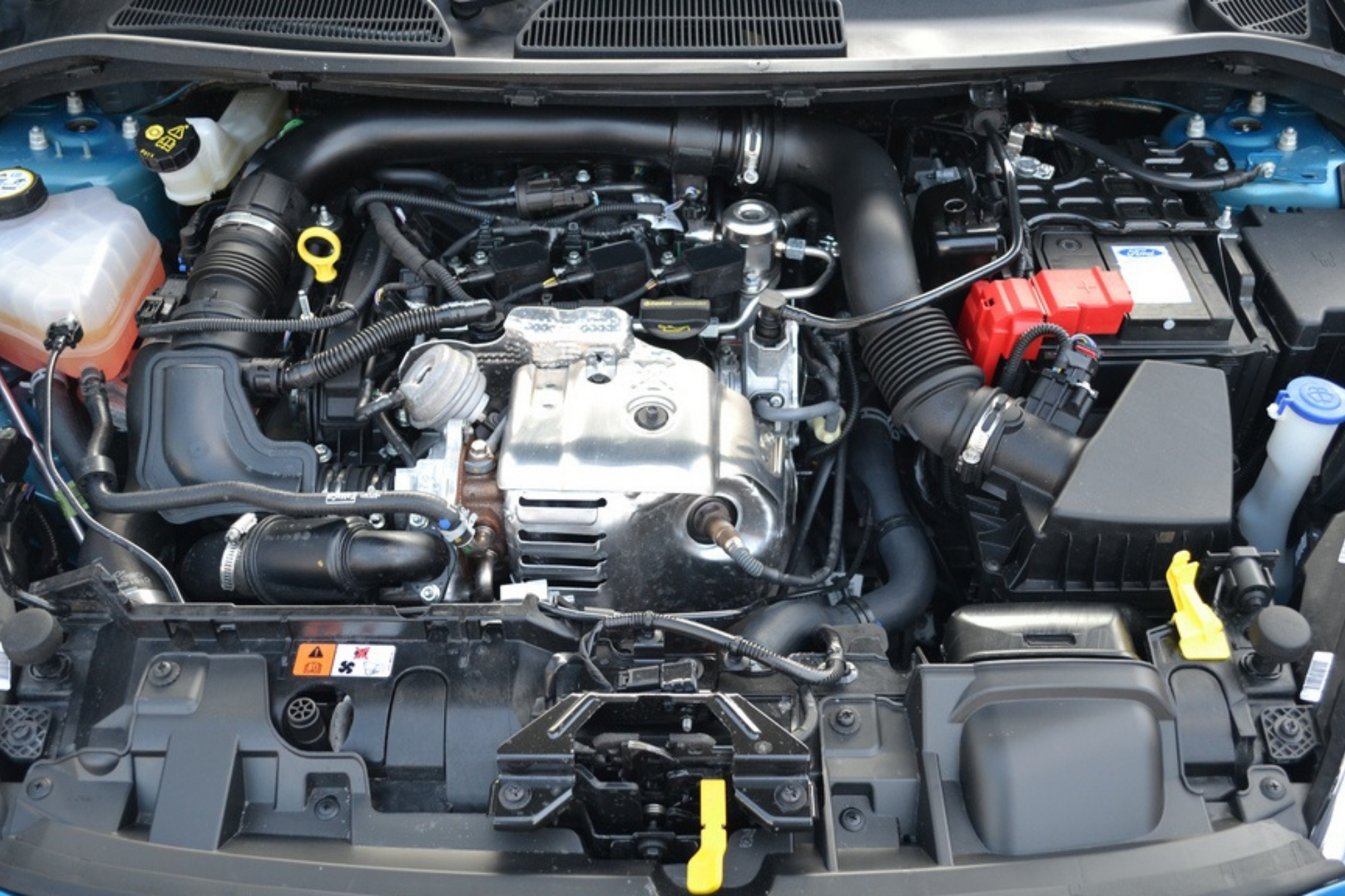 What Cars Use the 1.0L EcoBoost?

The Ford 1.0L inline-3 turbo engine is in the following models:

In the United States, the Ford Focus did receive the 1.0L EcoBoost engine starting in 2015. The Focus was discontinued in the US after 2018. Reports show only about 5% of US Ford Focus sales were with the 1.0 inline-3. As such, this engine is primarily in foreign markets where compact cars and smaller engines are more popular.

Anyways, most 1.0 EcoBoost engines deliver 99-140 horsepower. Some Focus models receive a less powerful 84 horsepower variant for 2018 and 2019. On the other hand, mHEV models use a belt-driven starter, alternator, and propulsion motor. Some of these models offer up to 153 horsepower.

Specs for the 1.0 inline-3 EcoBoost engine are as follows:

Ford 1.0 EcoBoost engines are ultimately built for efficiency, fuel economy, and low emissions. The sub 1 liter displacement puts in company with few other engines, especially in the US market. However, the use of a turbocharger allows the 1.0L 3-cylinder engine to deliver respectable power and torque.

Overall, performance is lackluster by modern standards. That said, it does deliver good performance for such a small and efficient engine. Its turbo aspiration also allows for some easy aftermarket potential if you’re really dying for more power.

Even simple stage 1 tuning can offer gains in the ballpark of 20-25 horsepower. This is with a 1.0 EcoBoost tune only and no other mods. Then you can add the standard bolt-ons if you’re still after more power. An intake, high-flow downpipe, and intercooler can add some great performance. With these mods and stage 2 tuning you may see 1.0 EcoBoost hp gains of 30-40+ horsepower.

Add it all up and you could possibly end up around 170-180 horsepower. Again, it’s still nothing crazy in todays world. However, it’s pretty darn impressive for a small 1.0L engine. That’s the power of turbocharging. Tuning and basic mods can really take the 1.0 EcoBoost engine to the next level.

The Ford 1.0 EcoBoost did go on to win 6 straight international engine of the year awards. That goes to show the Ford 1.0L inline-3 is a great engine. However, no engine is perfect and that applies to this engine too. A few of the most common Ford 1.0 EcoBoost problems include:

Throughout much of the rest of this article we will discuss these 1.0 EcoBoost engine problems in-depth. However, it’s important we add a few quick notes before moving along. We are considering the above issues among the most common for good reason. It doesn’t mean the problems are common in the true sense of the definition. Instead, when Ford 1.0 EcoBoost issues do occur these are a few of the most common areas.

That said, 1.0L inline-3 turbo engines do deliver good overall reliability. The small design and minimal cylinders also help keep maintenance costs down. Anyways, we will circle back to the topic Ford 1.0 EcoBoost reliability at the end of the article. For now, let’s move along and discuss the above issues and failures.

Up first are Ford 1.0 EcoBoost HPFP failures. HPFP refers to the high-pressure fuel pump, which is necessary on direct injection (DI) engines. DI relies on extremely high pressure that cannot be achieved with a standard fuel pump. The 1.0L EcoBoost uses a HPFP from Bosch, and the design is the same as found on many other direct injection engines.

The Ford 1.0 EcoBoost fuel pump uses a small piston internally to pump the fuel. It’s then driven by a triangular cam lobe, so each rotation of the camshaft leads to 3 piston cycles for the HPFP. In essence, the piston inside the pump is moving very quickly. Not only does that make it prone to failure, but there are also a few other important parts of the HPFP. The pressure relief valve and fuel control valve are both built into the pump and are a few other possible areas of issues.

Point is – HPFP failures aren’t due to any design flaw or other underlying issues. Instead, it mostly boils down to the nature of direct injection. These pumps run at high speeds and deliver very high fuel pressures (usually in the ballpark of 2,000 to 5,000psi vs 50-100psi for standard fuel pumps). The HPFP simply takes a lot of wear and tear and is prone to failure, especially as it accrues age and mileage.

Look for the following symptoms that may point 1.0 EcoBoost HPFP problems:

Fortunately, the Ford 1.0 EcoBoost fuel pump is relatively easy to access. Pumps are also a lot less expensive than they were in the earlier days of direct injection. Still, expect the HPFP to be a $400-600 job if you go to a repair shop for the work.

As this occurs, the build-up begins to restrict air-flow into the cylinders. This can lead to many different 1.0 EcoBoost symptoms as well as overall performance problems. The good news is that carbon build-up is rarely a serious issue that’s detrimental to reliability or longevity. Many Ford 1.0 EcoBoost engines will likely go their whole lives without carbon cleaning. It’s good maintenance roughly every 100,000 to 130,000 miles, though.

A few potential symptoms of Ford 1.0 EcoBoost carbon build-up are:

Again, the main issue that carbon deposits cause is uneven or inadequate air flow into cylinders. This can cause symptoms like rough idle and stuttering or hesitation while accelerating. Those symptoms are often due to incorrect AFR’s and engine misfires.

Power loss is the main symptom, but it can be challenging to detect. Carbon build-up occurs slowly over years and years and tens of thousands of miles. The power loss is gradual which can make it tough to notice.

Once excessive carbon build-up occurs one of the best methods to clean intake valves is walnut blasting. This involved walnut media shells and a heavy-duty shop vac. The walnut media shells are blasted into the 1.0 EcoBoost intake ports. This helps wipe away deposits and they’re then vacuumed out.

Other methods exist that are a bit more manual and labor intensive. Some use options like soaking the valves in brake cleaner (or other solutions) to get any deposits out. Anyways, intake valve cleaning is mostly labor and can run about $300-600 at a repair shop.

To wrap up the list of most common Ford 1.0 EcoBoost problems we have a pretty generic topic. As such, we’ll keep this pretty quick to keep things moving. It’s far from the first time we’re writing about engine oil leaks. Combustion engines use many different gaskets, seals, o-rings, etc. These parts are often made from rubber or rubber-like materials. Over time, they simply wear down and lead to possible oil leaks.

That’s exactly the case with the Ford 1.0L inline-3 turbo engine. Yes, some premature problems and oil leaks occur. However, 1.0 EcoBoost oil leaks often boil down to wear and tear. Gaskets degrade, begin cracking, and oil leaks develop. Again, it’s an issue on many combustion engines as they age.

Symptoms of Ford 1.0 EcoBoost oil leaks are pretty simple. Look for any visible leaks, burning oil smells, or light smoke from the engine bay. The parts are often cheap seals and gaskets, but labor can add up depending on the specific leak. The oil pan gasket, valve cover gasket, and main seals are a few common areas for leaks.

Is the Ford 1.0 EcoBoost engine reliable? Yes, we believe this engine earns average to above average remarks for reliability. The 1.0L EcoBoost didn’t earn the best reputation in its early days. However, all brand new engines and designs have their share of kinks to work out. Many of the early 1.0 inline-3 turbo issues were worked out within the first couple years. As of now, the Ford 1.0 EcoBoost doesn’t suffer from any major design flaws, problems, or reliability issues.

Of course, maintenance is one of the keys to owning a reliable EcoBoost (and the same applies for any engine). Change all fluids on time, use high-quality oil, and fix problems if/when they occur. Do all of this and the Ford 1.0L EcoBoost can deliver great reliability. Luck does play a role, and sometimes people run into random, fluky failures. We can’t control that, and it can be said for any engine.

In summary, Ford 1.0 EcoBoost engines are very efficient and economic. They’re not all-out performance engines, but considering the tiny 1.0L displacement they do offer respectable power and torque. Combine that with a balance of good reliability, and the 1.0L turbo engine is a great choice.

What’s your experience with the Ford 1.0 EcoBoost? Are you considering one?