When Subaru announced the new 2022 WRX there was only one thing on everyone’s mind: Was it going to include the FA24 or not? When the answer was yes, WRX enthusiasts immediately threw up their hands in celebration. Finally, the FA20DIT from 2015 was getting a serious upgrade.

Subaru had initially introduced the FA24 boxer engine in 2019 in the Subaru Ascent to some pretty good reviews. However, they re-tuned the engine for its placement in the 2022+ WRX, limiting the torque but increasing horsepower. Subaru also came up with a naturally aspirated version of the FA24, which they put in the 2022+ Subaru BRZ.

Though the FA24 is still a relatively new engine, we’ve put together everything that is known about it so far in this guide. Below, we will look at its history, specs, design, reliability, and, most importantly, its performance. Let’s get started.

*The FA24 is practically brand new, so it’s likely we will get some new information in the future. Make sure to check back here periodically for updates. 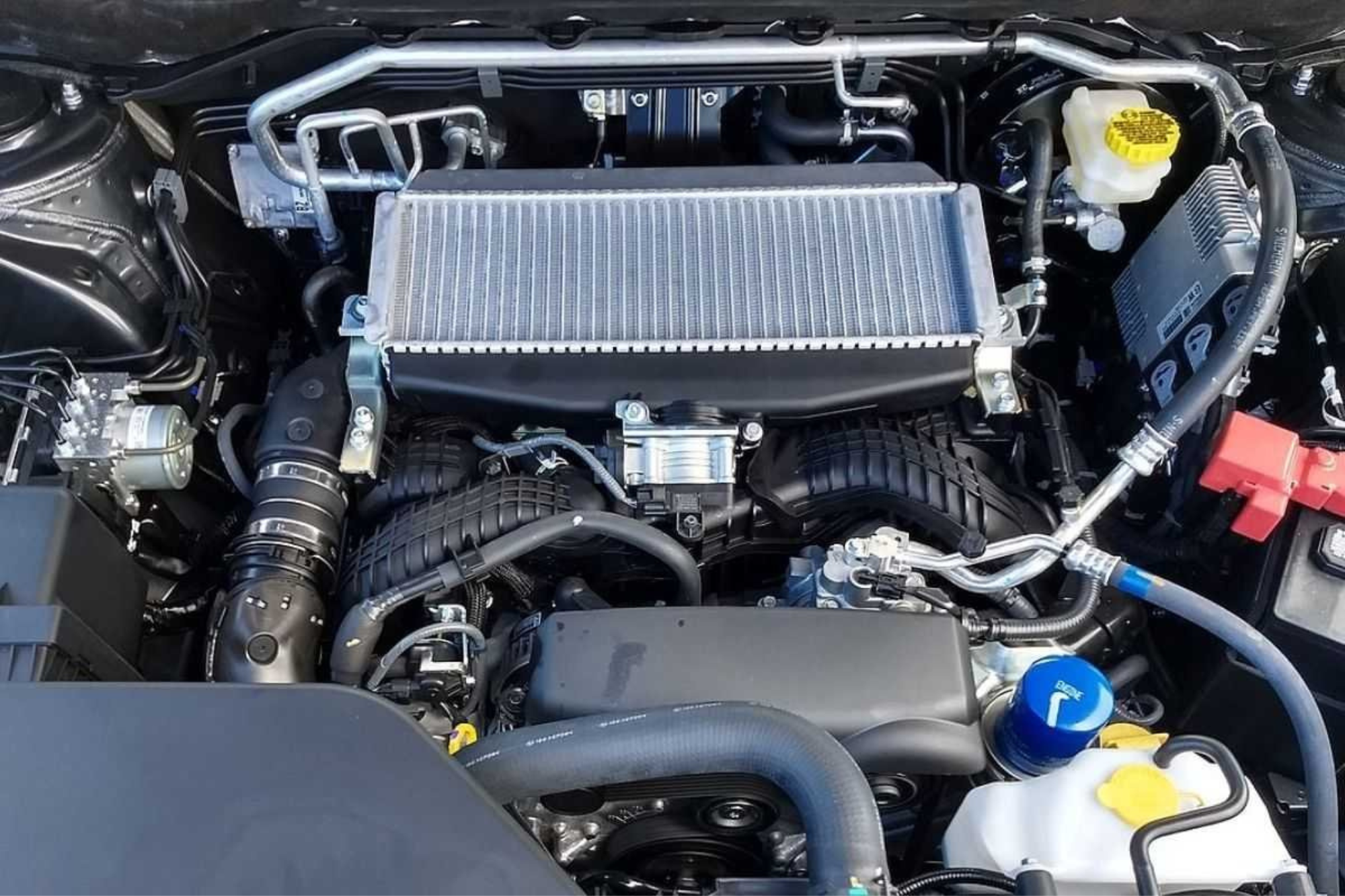 The FA24DIT has had a pretty short production life so far, as Subaru just introduced it in 2018. They first put it in the 2019+ Ascent, before giving it to the 2020+ Outback XT and Legacy XT. For 2022, Subaru is also putting it in the performance oriented WRX for the first time. Also new for 2022, is a naturally aspirated version, the FA24D, for the Subaru BRZ and Toyota GR86.

Initially, there was heavy speculation that Subaru was also going to put a high performance version of the engine in the 2022 WRX STi. However, Subaru announced earlier this year that the STi was being discontinued for the 2022 model year, shocking many fans of the longtime rally legend. Instead, that means that the FA24 powered WRX is now the top dog for performance in the Subaru lineup.

Typically, Subaru gives their WRX engines updates after 3-4 years, so it is unlikely we will see anything change for a while. However, the engine already seems very capable and fun so far, according to early reviews.

Specs for the 2.4L Subaru FA24 engine are as follows:

The FA24 engine is in the following models:

Like nearly all other Subarus, the FA24 is, of course, a horizontally opposed “boxer” style engine. The FA24DIT is based on the outgoing FA20DIT (FA20F), a 2.0 L engine Subaru first introduced in 2012. The FA24 is a 2.4 L, flat-four, turbocharged engine with direct injection. Subaru increased the bore from 86mm to 94mm to get the extra 0.4 L of displacement over the FA20DIT. It features an all-aluminum block and head, and has dual overhead cams controlled by a timing chain. Compression is unchanged from the FA20DIT at 10.6:1, and select models come equipped with an oil cooler to regulate oil temperatures. Also similar is the use of a twin-scroll turbo.

Twin-scroll turbos are more efficient and perform better than their single-scroll counterparts. The point of the twin-scroll design is to separate the exhaust gas pulses coming out of the exhaust manifold into two ports, or scrolls, which separately feed into the compressor wheel. This creates smoother flow from the exhaust into the turbo, which allows for better cam timing and more pulse energy. Subaru’s tuning utilizes this, in conjunction with direct injection, to massively increase power output and efficiency on the FA24. It results in an earlier and flatter torque curve, while increasing horsepower throughout the power band.

There is also a naturally aspirated version of the FA24, the FA24D. The FA24D supplements the engine’s direct injection with port injection, courtesy of the Toyota D-4S fuel system. This eliminates issues with carbon buildup while providing extra fueling for peak power. The compression ratio on the FA24D is raised to 12.5:1, to account for the lack of forced induction. Subaru also tuned the torque curve to be much earlier in the FA24D than its naturally aspirated predecessor, the FA20D.

The biggest carryover from the FA20DIT to the FA24DIT is the continued use of direct injection. Gasoline direct injection, or GDI or DI for short, is actually a relatively old technology that Bosch first developed in Germany in the 1950s. However, Subaru did not start to use the technology until the 2010s, with the FA and FB series of engines.

The downside to GDI is the much higher manufacturing costs, as well as the added complexity of the systems. GDI fuel injectors are much more expensive than their standard counterparts, and GDI systems also add an extra fuel pump. There is the standard in tank fuel pump, as well as a high pressure fuel pump directly upstream of the injectors and fuel rails. Unfortunately, these high pressure fuel pumps have not always shown to be reliable, and they are expensive to replace. In addition, DI engines are subject to carbon build up on the intake valves.

So far, early returns on the FA24 point to pretty stout reliability, but the engine is so new that data is very hard to come by. Virtually nobody has driven the naturally aspirated FA24D, so it is really anybody’s guess on that engine what to expect. However, if the outgoing FA20s are any guide, there are a few things to look out for.

Number one is going to undoubtedly be carbon buildup on the intake valves. Carbon buildup occurs on the intake valves of GDI engines, because the location of fuel injectors does not allow them to spray fuel on the back of the intake valves to clean the carbon off. Typically, this is not too big of an issue, and 95% of owners will never experience problems related to excessive carbon buildup. In severe cases, it can cause poor idling, misfiring, and loss of power. The only prevention method is to periodically have your intake valves cleaned through a process known as walnut blasting. But again, it’s highly unlikely the average driver will suffer from these issues, as they rarely caused serious issues on previous GDI Subarus.

The other issue with the outgoing FA20DIT is weak connecting rods. Early 2015-2016 WRXs were notorious for throwing rods at relatively low mileage on tuned engines. However, the FA24 supposedly has improved piston design and stronger connecting rods, that should hopefully alleviate any lingering issues.

Apart from those there has not been any widespread reports of problems with the FA24 engine. However, now that it is being pushed more to its performance limits, that might change.

On the track, the FA20DIT makes the zero to 60 mph sprint in just 5.5 seconds, while its naturally aspirated brother does so a hair slower, in 5.9 seconds. The FA20DIT is also not surprisingly faster at the ¼ mile, making it in 13.9 seconds at 103 mph. Whereas the BRZ does it in 14.3 seconds at 98 mph. The FA24 only runs on 12 PSI of boost, 4 PSI less than the FA20, but it makes almost identical power. Off boost, the FA24 is much more responsive and powerful than its predecessor, a benefit of its larger displacement.

One of the biggest gripes with the new FA24 is that it is not anymore powerful than its predecessor, and that complaint does have some merit. Torque output is identical, while horsepower is only increased by 3. Some dynos have even shown the FA24 to make less horsepower than the FA20. However, while peak numbers might not be very flattering for the 2.4 L, the entire powerband is much improved. Gone are the unfortunate torque dips and uneven power distribution of the FA20. The new engine gives the car a larger mid-range and reaches peak torque earlier while holding it for longer.

Unfortunately, so far there is not a ton of aftermarket support yet for either variant of the FA24. It is unclear if FA20 WRX parts will fit the new engine, but it is not likely they will be direct fits. It looks like the industry will pretty much have to start from scratch with the new FA24s, as there is not even a well known tuning solution yet.

Yet, we do know a little bit about the power limits for the FA24. Prime Motoring swapped an FA24 engine out of an Ascent into a Subaru Crosstrek as part of a pretty monster build. It ended up making over 500whp on the stock block, and reportedly has held up pretty well without major issues. So, while it’s a stretch to say the FA24 is now definitely capable of putting down 500whp reliably, it is an indication these motors can take some future mods and abuse.

The FA24 engine is still pretty new, but so far it looks like it will be a great motor. Performance wise, it has already shown some serious potential, and even in its stock forms it is no slouch. The combination of direct injection, a twin-scroll turbo, and increased displacement, will certainly make the FA24 formidable for the foreseeable future.

A lot is still unknown about the FA24, and there is virtually no aftermarket support – yet. But, as we have seen the Subaru community do continually, it’s likely only a matter of time before someone starts to crack the code. It will be interesting to see how the FA24DIT ages with the WRX and how the Subaru community grows with it.

Are you considering getting a brand new 2022 WRX or 2022 BRZ with the FA20DIT? Do you already have experience driving or working with one?
Let us know in the comments below!