A cold air intake is one of the first mods we recommend for the 2.7 EcoBoost and for pretty much all cars for that matter. Because the 2.7 EcoBoost is a turbocharged engine the benefits of an upgraded intake are significantly greater than that of a naturally aspirated engine. Cold air intake increase airflow which improves turbo efficiency and therefore power. Additionally, intake systems are rather inexpensive for the power gains they provide. In this guide we are going to cover the benefit of upgraded intakes and list the best F150 2.7 EcoBoost intake options.

While this guide is more geared towards the F150, it is relevant for all Ford’s with the 2.7L EcoBoost engine. 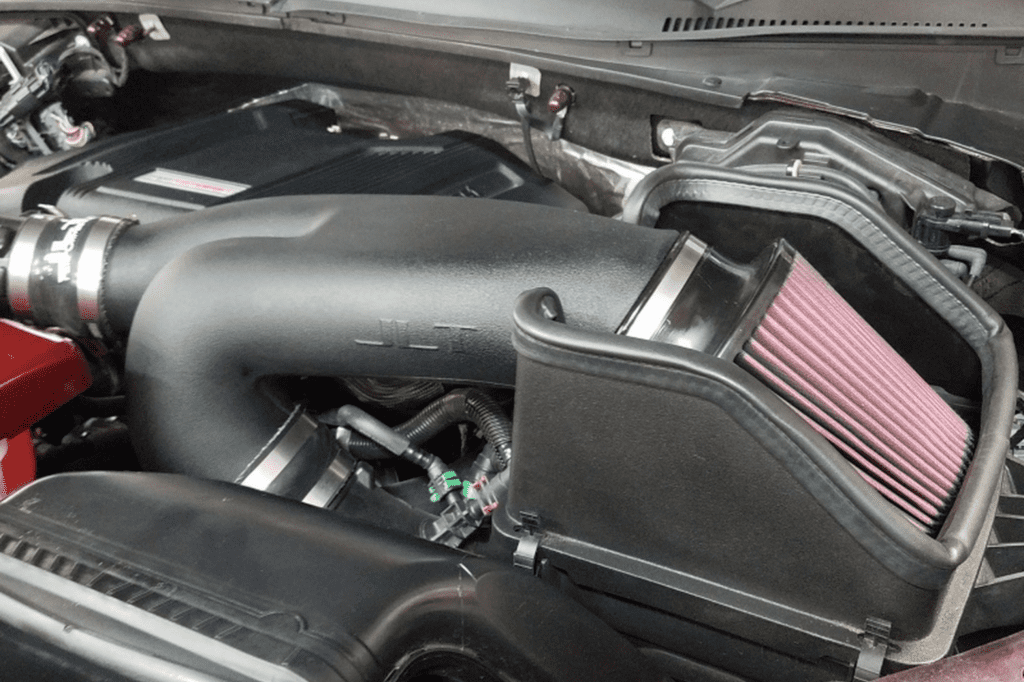 The intake system on the 2.7 F150 is completely adequate for stock engines that are running stock boost. However, once you further modify the engine and begin adding more horsepower, the stock intake system becomes restrictive. Running higher levels of boost requires more air flow than the OEM intake can provide.

Again, the biggest benefit of an intake comes on modified F150’s. On a stock 2.7 EcoBoost you can probably expect to get somewhere near 2-5whp gains. However, when you combo an intake with a tune, such as the JB4, you will see gains closer to 10whp from the cold air intake alone.

While we have been referring to upgraded intakes as ‘cold air intakes’ this isn’t necessarily accurate. Technically speaking, cold air intake re-route the location of the air filter usually somewhere inside the lower part of the front bumper. The benefit of this is it draws in air from a point further away from the engine, reducing the temperature of the air it pulls in. This types of intakes are most common on naturally aspirated engines that do not have intercoolers.

On turbocharged vehicles the intake air temps don’t matter as much. Once the air is sucked in it is sent to the turbocharger where it is heated up anyways. It then enters the intercooler where it is cooled down before entering the combustion chamber. Therefore the temperature of the air when it enters the intake really doesn’t matter since it doesn’t impact the intercoolers ability to cool the air.

With that being said, the term cold air intake is synonymous with performance intake or upgraded intake. The benefit we are chasing is improved airflow, not lower air intake temps. However, one design feature that does matter is open vs. closed intakes.

There are two primary styles of upgraded intakes: open and closed intakes. Open intake systems utilize an air filter that is completely open and exposed to the engine bay. Closed intake designs will put the air filter within an enclosed box. The main difference is whether the filter is exposed to engine bay air or not.

With that being said, we prefer open intake systems due to their greater airflow benefits. As we mentioned above, intake air temps really don’t matter so we prefer to opt for more airflow over lower IAT’s.

While we prefer open intakes, it really doesn’t matter unless you are aiming for serious power. Closed intakes are still a huge improvement over the stock system and provide ample airflow for heavily tuned and modified F150’s. The benefits of the increased airflow from open air systems really only comes into play when you are pushing the power limits of the 2.7 EcoBoost or upgrading your turbochargers.

In this section we’ll mention a few of our favorite cold air intake options for the 2.7L F150 EcoBoost. Our recommendations are based on a combination of price, quality, and performance. With that being said, this isn’t an exhaustive list. There are dozens of intake options out there.

So long as the intake system uses a quality air filter the performance benefits won’t vary much from system to system. Choosing to upgrade your intake system is honestly more important than which intake brand you choose. Just stick with a name brand and avoid the ebay junk and you will be fine.

The last important item is fitment. Some 2.7 EcoBoost intakes will fit all 2015+ models whereas some fitment will vary for 2015-2017 models and 2018+ models. Just be cautious of fitment before you order. 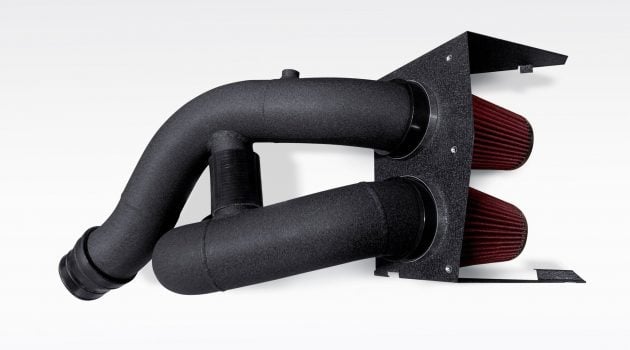 CV Fabrication (CVF) offers some awesome bolt-on performance upgrades for Ford EcoBoost engines. Among their products is the F-150 2.7 EcoBoost dual-filter cold air intake system. As the name suggests, this intake kit uses two filters and outflows the stock intake by 65%. The open, dual filter design is sure to deliver excellent power and performance gains. You will also notice a lot more turbo and induction sounds.

As shown above, the intake also includes a 16-gauge heat shield. The filters are 8-layer 3.5″ CVF dry filters. Ultimately, this is an awesome intake from top to bottom. In the BMW world, we’re used to seeing tons of dual filter designs on twin turbo engines. They’re a great option for lightly-modded engines all the way up to extreme 700+whp examples. Point is – the CVF dual filter intake system has a lot of potential regardless of your exact goals.

We’re big fans of CVF products and developed a good relationship with them. As such, we were able to get a 5% coupon code (TUNINGPRO) for our readers. With a final price of $285 this is by far our favorite intake system for the F-150 2.7 EcoBoost.

The Livernois Motorsports cold air intake is another great option for the 2.7L F-150 EcoBoost. It’s one of the pricier options around, but Livernois builds some great products here in the United States. Livernois’ intake is also a closed airbox system, so don’t expect quite as much flow or induction/turbo noise as other options. Though, the intake does have totally redesigned intake tube to help promote better air-flow.

JLT’s intake system is an open air system. However, it features a heat shield that wraps around the air filter to prevent some hot air from being sucked in. It uses a large 5″ piping and a big 5×7″ filter to provide a huge airflow increase over the stock system.

The open system will provide an awesome intake sound and flow more than the majority of other intakes on the market. The one downside to the JLT intake is that it is not CARB approved and therefore it is technically illegal in California. Overall, at a little over $300 this is one of the best systems on the market, especially for the cost.

K&N is one of the leaders in air filters and performance intake systems. Coming in at under $300, the K&N system is a good budget friendly option on the market. They offer two versions: one that is roto-molded and one that is CARB approved for California F150 owners. The K&N system is also a direct bolt-on fitment and doesn’t require any custom tuning.

K&N’s F150 intake is also an open air system and claims a 50% increase in airflow compared to the stock system. While we have seen claims on 20hp gains from this intake, you should expect closer to 10whp. Again, this intake says it only fits 2015-2019 models but it works for all 2015+ models.

Increasing horsepower or turning up the boost levels on a turbocharger requires increased airflow. The stock intake system on the 2.7L F150 becomes restrictive when modified and tuned which makes upgrading the intake a necessity for those looking to increase power.

Not only does an upgraded intake provide up to 10whp and 10wtq gains, it also improves turbo spool and efficiency, provides a cool sound, and slightly improves gas mileage. We recommend open air systems such as JLT over closed air systems like Roush due to the increased airflow provided from open systems. But, closed air systems work perfectly fine for those just running normal tunes and modest modifications.

Overall, upgrading the intake on your 2.7L F150 is one of the best mods you can perform. We love the CVF Intake for its combination of price, design, quality, and performance. However, the Roush system and a number of other closed systems such as Banks Power and S&B are great systems for those looking for a quieter closed box intake.