The 3.5L EcoBoost F-150 finds itself in an interesting position. Ford has built up the F-150’s brand identity around the industrial working class; a far cry from environmental regulations and EPA guidelines. Its All-American mythos is very Kevin Costner-esque in attitude. The 3.5 EcoBoost acts as a divisive member of the family because of that.

Ford unquestionably knew that many would think that the EcoBoost F-150 was borderline treasonous. To compensate, they made the EcoBoost’s performance impossible to argue with.

This Ford F-150 3.5L EcoBoost FAQ article is meant to get anyone interested up to speed. In many ways, the EcoBoost has transplanted a new soul into the F-150. Our goal here is to explain that character change and explain some of the benefits and shortcomings of the 3.5L EcoBoost power plant. We’ll also cover some general stats and differences between the EcoBoost and Coyote V8 F-150s available for purchase today. Here’s how we’ll break it down:

As a quick aside, if you are hunting for something specific, you can use the “find” feature. Pressing Ctrl + F on Windows (or Command + F on Mac) will allow you to search for specific terms or topics to make navigating easier. Let’s get into it! 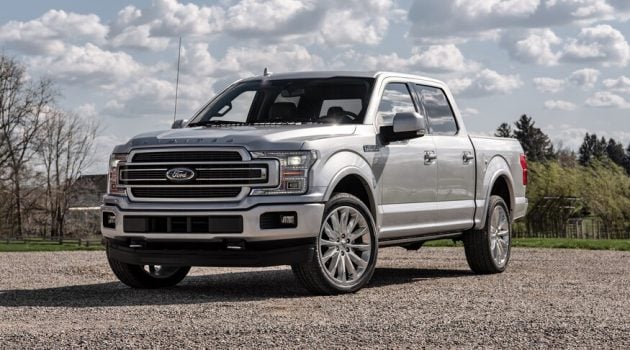 The most significant change made to the tried and true F-150 formula with the EcoBoost model is the integration of Ford’s 3.5L twin-turbocharged V6 engine. Throughout most of the F-Series’ long production life until 2010, F-150s only used naturally aspirated V6 or V8 engines.

As fuel efficiency and environmental impact became more important in the modern age, Ford added the EcoBoost engine to the F-150 lineup. Ford’s goal was to create an F-150 variant that saw better efficiency without sacrificing any performance. They largely succeeded in that mission. Although the EcoBoost has a lesser displacement than some of the larger V8-equipped F-150s, the use of turbochargers compensated for the difference.

Fewer cylinders meant less fuel consumption, and turbochargers meant more torque. The EcoBoost formula is geared towards those looking for a more fuel-efficient truck that can still haul heavy loads.

What model years was the F-150 EcoBoost available?

How much horsepower does the 3.5L Ford EcoBoost F-150 make?

Ford has tweaked the 3.5L a couple of times, as it has been in production for a while. Each tweak has yielded a smidge more power and torque as well.

Upon its release in 2011, the 3.5L EcoBoost F-150 produced 365 hp at 5,000rpm and 420 lb-ft of torque. Peak torque was achieved at 2,500rpm, meaning that most of the torque was delivered low in the rev range. This makes the EcoBoost an extremely effective tow rig, as low-end torque is necessary to get a load moving. This first-gen 3.5L EcoBoost engine was used from 2011 until 2016, when Ford gave it a refresh.

The second-gen 3.5L EcoBoost was implemented in 2017 and is still in use today. With the refresh came a bump in horsepower to 375 hp at 5,000rpm. Torque saw a significant increase too, now at 470 lb-ft. Peak torque is still delivered at 2,500rpm, maintaining towing capability dominance.

Efficiency was a top priority for Ford while developing the 3.5L EcoBoost engine that powers the F150. That reflects in the gas mileage figures of the 3.5L EcoBoost, especially when compared to its competition. The EcoBoost’s gas mileage is dependent on its drivetrain configuration, with the rear-wheel-drive variant remaining more efficient.

The F-150 3.5L EcoBoost has the same storage and cargo dimensions as its other F-150 brethren. F-150s are known as one of the most capable pickups on the market today. They have historically set the benchmark for the pickup formula, which doesn’t change with the EcoBoost.

Cargo bed dimensions vary depending on the model of F-150. There are three bed lengths to choose from with the 3.5L EcoBoost V6. The three include the 5.5ft Regular Cab, 6.5ft SuperCab, and the 8ft SuperCrew. Bed length directly correlates with bed volume. The Regular Cab has 52.8 cu.ft. of storage space. The SuperCab has a larger 62.3 cu.ft. of storage volume. Finally, the SuperCrew has a massive storage volume of 77.4 cu.ft.

Overall, all three F-150 variants are extremely capable for most material-hauling missions. All three can be ordered with a 3.5L EcoBoost engine as well, reaping the benefits of superior towing capabilities and increased efficiency. 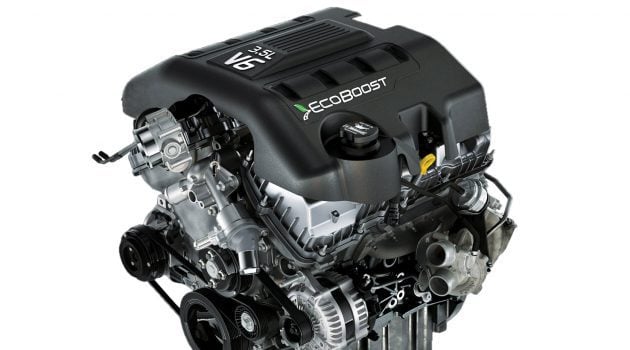 As we’ve already covered, Ford’s top two priorities with the 3.5L EcoBoost engine were performance and efficiency, in that order. Reliability was number three on their list. As a result, the 3.5L EcoBoost is one of the most reliable engines that Ford makes. As the EcoBoost has been available for over 12 years now, longevity has been proven by the reliability of the early production 3.5L V6s.

It can be said, however, that the second-gen 3.5L EcoBoost (released in 2017) is superior in terms of reliability. Between generations, Ford updated and upgraded particular components to increase reliability and performance. The second-gen saw the addition of port fuel injection to reduce carbon buildup on the valves. The turbochargers also saw a refresh to increase their responsiveness and reliability. The cam drive system was given a more resistant and durable dual-chain design as well.

What are the most common 3.5L EcoBoost F-150 problems?

While the 3.5L EcoBoost is generally considered a very reliable engine, no engine is immune to problems. There are a few problems that infrequently plague the 3.5L EcoBoost, the most common of which aren’t severe.

Perhaps the most commonly cited 3.5L EcoBoost problem is a buildup of carbon on the engine’s intake valves. This is primarily an issue for the first-gen 3.5Ls, as they use direct injection fueling. As such, carbon build-up on the intake valves occurs over time.

Another issue that infrequently affects first-gen 3.5L EcoBoost’s is timing chain wear. Over time, and with extensive miles, 3.5 EcoBoost timing chain guides, tensioner, and cam phasers tend to stretch and wear. This is an issue noted only for early production 3.5L V6s, as the second-gen features a durable dual-chain design.

For an engine that has been around for over a decade, the 3.5L EcoBoost is pretty solid having only those two issues to note. There are, of course, other problems that may creep up as the engines continue to age, but at this point, those are the ones that carry any weight. If you want to learn about these issues in more depth, we have an article all about them. Check out our 3 Most Common Ford 3.5 EcoBoost Problems article for more information.

As the 3.5L EcoBoost is a turbocharged “performance” engine, Ford is particular about the type of oil that they recommend for regular service intervals. Ford states that only SAE 5W-30 fully synthetic engine oil is to be used.

As an additional note, the 3.5L EcoBoost F150 has a 6.0-quart oil capacity. You should also change your filter during every oil service.

What is the service schedule for a 3.5L EcoBoost F150?

The 3.5L EcoBoost F-150 shares many of the regular services that you’d expect from any F-150. The EcoBoost engine doesn’t require any specialized maintenance unique to itself. We’ll break down the required maintenance below:

The base price for an F-150 varies dramatically based on the model F-150 that you choose. The 2022 F-150 line includes the XL, XLT, Lariat, King Ranch, Platinum, Limited, Tremor, and Raptor. Every F-150 variant being offered is available with the 3.5L EcoBoost engine, excluding the XL and XLT.

The price of the inclusion of the 3.5L EcoBoost depends on the model. To make pricing information a bit easier to manage, a pricing chart is included below:

So, as it turns out, the 3.5L EcoBoost is almost always a premium over the 5.0L Coyote V8 engine option for most of the F-150 range. In a way, that makes perfect sense as the EcoBoost is a far more complicated and technologically advanced engine. Depending on your application, the increased efficiency and better torque might be worth shelling out the additional dough.

Obviously, this is a highly subjective question and one whose answer can vary on a person-to-person basis. However, there are a few metrics that can be measured in a head-to-head comparison. Keeping in mind that we are comparing F-150s here, let’s cover the type of things that a typical prospective F-150 owner would be concerned about.

First, towing capacity. As we covered earlier, the 3.5L EcoBoost unquestionably has the edge as far as towing is concerned. With over 100lb-fts more torque, the EcoBoost has a much easier time lugging around heavy equipment. This reflects in the towing capacity numbers. The long bed, 3.5L EcoBoost F-150 equipped with a factory 3.55 rear axle has a GVWR of 17,000 pounds and a max towing capacity of 12,100 pounds.

While the 3.5L EcoBoost undisputedly has more torque at its disposal, it does have less horsepower. The 3.5L EcoBoost produces 375hp while the 5.0L V8 produces 395hp. Even though 20 horsepower might seem significant on paper, in reality, the EcoBoost will feel faster due to the increased torque.

As some F-150 models can feature either the 3.5L EcoBoost or the 5.0L Coyote V8, bed storage space can be identical. The amount of rear storage space has to do with which model F-150 you choose independent of the engine.

Upon its release, Ford knew that they had created something revolutionary with the 3.5L EcoBoost engine. Over its 12 year, and continuing, life cycle, the 3.5L EcoBoost has turned even the most staunch coal-rollers into fans of an eco-friendly turbocharged 6-cylinder engine. The F-150 name means something entirely new because of it.

The 3.5L EcoBoost engine stands on such a high pedestal because it is great in nearly every way. It isn’t an underpowered and underperforming slog, indeed quite the opposite. It is the perfect engine for the needs of the F-150 lineup. The additional torque over the 5.0L V8 allows it to tow more while being more fuel-efficient in doing so. Its stellar reliability reports show that EcoBoost technology is solid and dependable. It is available in most F-150 models and wheelbases. Overall, it’s hard to find many negatives.

If you found the information in this article helpful, check out some of our other F-150 guides. We have a guide covering the 3 Most Common Ford 3.5 EcoBoost Engine Problems. Otherwise, check out our article F-150 3.5 EcoBoost Intercooler Upgrade Guide. As always, safe driving!