The Mitsubishi Evo X is one of the most legendary and sought out modern tuner cards in the world. It is the 10th generation of the iconic Lancer Evolution, and first made its debut in the 2008 model year. Unfortunately, it was discontinued after 2015, making it one of the hottest options on the used market.

The Evolution X is powered by the 4B11 engine — a 2 liter, inline 4, with an aluminum block. The 2015 Evo X Final Edition made a whopping 303hp/305tq, fed to an outstanding AWD system. The 4B11’s predecessor, the 4G63, is one of the most legendary engines ever created, and the 4B11T is a great successor.

One of the most popular mods for the Evolution X is the downpipe. An Evo X downpipe upgrade is a great way to boost horsepower, torque, and increase turbo spool and responsiveness.

In the following guide, we will look at what benefits you can get from upgrading your downpipe, and that will be followed by a list of our recommendations for top downpipes on the market. Previously we have looked at Evo X coilover upgrades as well as the Top seven mods for the Evo X, so make sure to check them out, too. 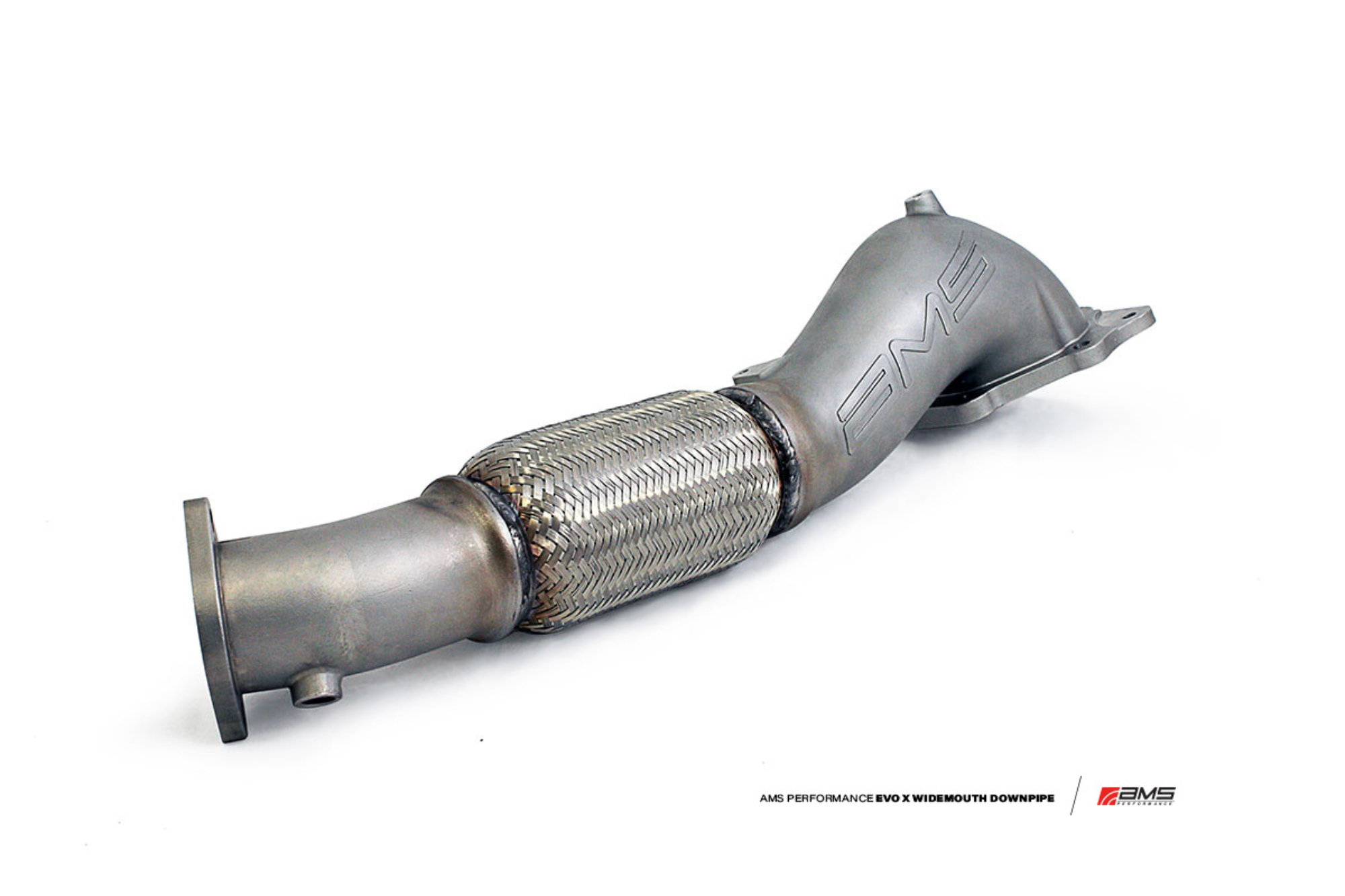 What is a Downpipe (DP)?

The downpipe is the first part of your exhaust system that connects directly to your turbocharger. On the Evo X, the DP sits just between the turbo and the test pipe. On most turbo cars, the DP contains at least one catalytic converter. However, on the Evo X, the cat is located in the test pipe instead.

There is no cat in the stock downpipe on the 4B11T, which means that upgrading it will not remove any emissions equipment. This is especially important for those looking to stay emissions compliant.

Yet, Evo X downpipe upgrades will still free up exhaust flow and add both horsepower and torque. You will also see an increased and more aggressive sound from the exhaust after changing the DP. Aftermarket downpipes are larger and freer flowing than stock, which is where the gains come from.

For an Evo X downpipe upgrade there are two basic options, either widemouth or divorced style. Both of them offer similar flow to each other as well as sound. The difference between them is how they connect to the turbocharger.

A divorced style downpipe has two different tubes, one significantly smaller than the other, that both connect to the turbo. The larger tube covers the turbine outlet and the smaller tube covers the wastegate outlet. They both eventually merge together towards the middle of the DP. A widemouth style downpipe covers both the wastegate and turbine outlets with a single exit and only consists of one large tube.

The purpose behind a divorced style is to reduce boost creep and lessen potential turbulence in the exhaust flow. By allowing for two smaller exits instead of one larger one, the flow can be controlled better and more efficiently.

Widemouth designs have been known to be prone to boost creep, which is where the turbo continues to build boost even when it should be tapering down. This is problematic because the engine can run in a lean condition and boost can’t be controlled. This effect gets exacerbated with catless test pipes.

The smaller tube that covers the wastegate outlet is called the wastegate dump tube. On some downpipes the dump tube is merged into the larger tube partway down the downpipe. However, there is also the option on some for the dump tube to be left open and not connected. This vastly increases the sound of the DP to epic proportions, but attracts a lot of attention. This option should really be reserved for track/show cars, as it is absolutely thunderous.

Most people looking at an Evo X downpipe upgrade are concerned with horsepower and torque gains, but there are several other benefits that come with it.

An upgraded downpipe on the 4B11 will net between 10-15whp and 10-15wtq. The gains would be more if a cat was being removed, but those are not a factor in these downpipes. Still, there are some noticeable power gains that will be had and the car will definitely feel livelier.

One of the biggest improvements an aftermarket downpipe will give is reduced backpressure, which aids in both turbo efficiency and spool. Your turbo will spool noticeably quicker after an Evo X downpipe upgrade, due to the ability to push exhaust gas through quicker and easier.

You will also see an increase in sound from an Evo X DP upgrade. The tone will be deeper, more aggressive, and much louder. This is even more apparent when paired with an aftermarket test pipe and cat back.

Tuning is not necessary after upgrading to a new downpipe on the Evo X, but it is always recommended for the biggest gains. Tuners can take advantage of the reduced backpressure and greater flow by increasing boost. This gives more power throughout the powerband and makes the car stronger and quicker everywhere.

First up on our list is the AMS Performance Evo X downpipe. It is a widemouth design and one of the most sought out and recommended on the market. The AMS DP is a fantastic combination of price and performance, with fitment and quality being top-notch. It is made entirely from 304 S/S and is 3” throughout, allowing for maximum gains.

The Lancer Evolution X will see power increases of 10-15whp/wtq after installing the AMS downpipe, and much improved spool time. It is one of the better flowing downpipes on the market and has been used on some really big horsepower builds. It features direct OEM fitment to the turbo and test pipe, making it a great first mod for many enthusiasts.

The next entry on our list is the Extreme Turbo Systems (ETS) divorced DP. It is a divorced style downpipe and the dump tube has two options – recirculated or open. The recirculated option merges it back into the larger tube, whereas the open version lets it vent to the atmosphere. The open option is much, much louder, and is really meant for dedicated track or show cars.

The Lancer Evolution X will see power increases of 10-15whp/wtq with the ETS divorced downpipe. Both versions of the dump tube offer the same power, with the difference being sound. As usual for ETS, their downpipe has been used on some pretty iconic builds, including some 7 second Evo Xs.

Like the AMS Performance DP, the ETS tube also offers direct OEM fitment to the test pipe and turbo. Fitment and quality are exceptional on the ETS downpipe, and users can’t go wrong installing it on their 4B11.

The MAPerformance Evo X O2 Eliminator Downpipe is one of the most tried and tested downpipes on the market. It is known for being a fantastically engineered and fabricated downpipe, capable of 10-15whp/wtq gains. It is available with ceramic coating to help reduce heat soak for a very reasonable price.

The MAPerformance Eliminator is a solid Evo X DP upgrade choice. It is divorced style with a recirculated dump tube. The dump tube helps to reduce boost creep, and it has the option of a CNC 3D contoured flange for those with larger turbos. The O2 Eliminator name comes from the integrated O2 sensor housing.

The final entry on our list is the Tomei Evo X 3” downpipe. It is a widemouth style downpipe and like the AMS is full 3” throughout. It is a great option for the 4B11, and Tomei is widely known for their excellent quality and fitment.

Installing this downpipe on the Evo X will net 10-15whp/wtq and significantly reduce spool time and backpressure. The Tomei is known for being one of the louder options on the market. It also comes with exhaust heat wrap included which aids with flow.

As far as modding goes, an Evo X downpipe upgrade is one of the best choices. It keeps the car emissions compliant while still unlocking good horsepower and torque. The volume increase is also nice and adds a distinct and aggressive tone to the exhaust.

This guide looked at four top options for Lancer Evo X downpipe upgrades, including both divorced and wideouth styles. The ETS and MAPerformance are both great divorced style options at a similar price. Both are manufactured in the USA, with the ETS having the option for the open dump tube. Likewise, both the AMS Performance and Tomei downpipes are great widemouth options. Quality and price wise they are nearly identical, with AMS getting the nod due to its reputation within the community.

What’s your experience with Lancer Evo X downpipe upgrades? Are you considering one?