Catalytic converters are the heart of and engines emissions system. However, they are also the most restrictive part of the exhaust system due to their internal structure. Catalytic converters, also commonly referred to as ‘cats’, create backpressure and restrict exhaust air flow. Despite the negative impact they have on performance they are extremely important in keeping exhaust gases clean.

When catalytic converters fail it is usually from becoming clogged. When the cats become clogged it further restricts exhaust gases and prevents them from leaving the exhaust system. This creates more backpressure which sends exhaust gases back into the combustion chamber creating numerous performance related issues and resulting in your car failing emissions inspection. 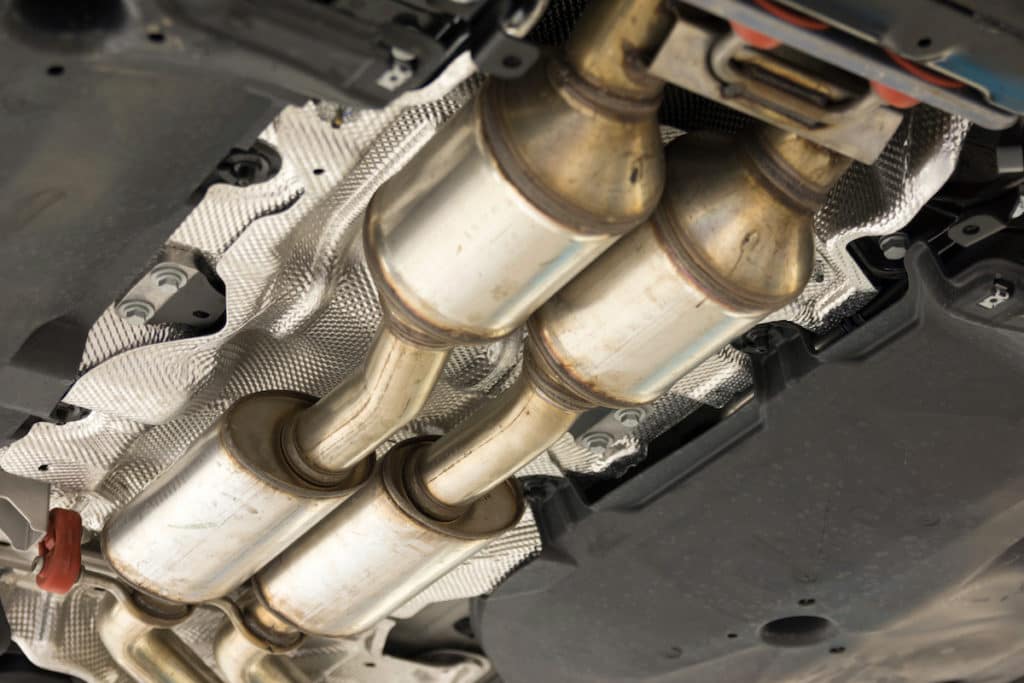 What are Catalytic Converters?

Having cats on your car is a legal requirement in all 50 states within the US as the cats are responsible for cleaning exhaust gases and making them better for our environment.

How Do Catalytic Converters Work?

The inside of a catalytic converter is a honeycomb structure that is made of rare earth metals like platinum, palladium, and rhodium. The primary exhaust byproduct is nitrogen oxide which is very harmful to the environment. When the nitrogen oxide collides with these metals it creates a chemical reaction which breaks the nitrogen oxide (NOx) down into carbon dioxide and water.

The first catalytic converter, or primary cat, is usually made of platinum and rhodium. It breaks down the NOx into pure nitrogen and oxygen molecules. These molecules then flow through the secondary cat which is made of platinum and palladium. When the molecules reach the secondary cat chemical oxidation takes place which breaks down carbon monoxide and hydrocarbons into the carbon dioxide and water which eventually flow out of the exhaust tailpipes.

Ultimately, the catalytic converters use rare metals to create chemical reactions which then turn exhaust gases into less harmful gases. 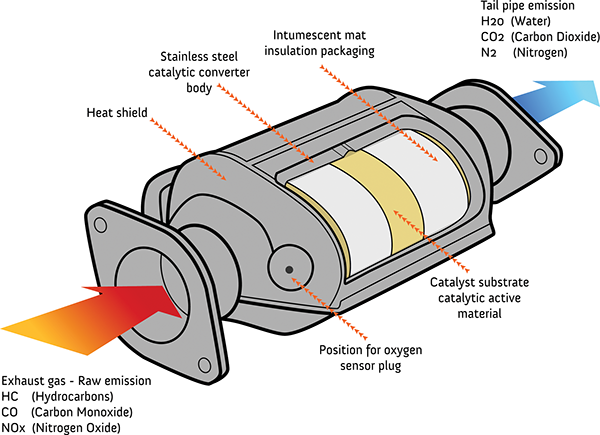 Why Do Catalytic Converters Fail?

The major internal components of a cat is metal. Exhaust gases exiting the engine are extremely hot. Cylinder misfires and other ignition related issues can cause fuel to be left unburned and enter the exhaust system. When this happens the unburned fuel then ignites in the catalytic converter. Because the metals are in a honeycomb structure when they melt they close up the honeycomb air chambers and clog the exhaust system.

Once a catalytic converter starts to get clogged it creates backpressure sending exhaust gases back into the combustion chamber. This in turns creates even higher exhaust gas temperatures which further melts and clogs the cats. Additionally, it can cause misfires which sends more fuel into the exhaust system.

While clogged catalytic converters is the most common failure, they can also fail a few others ways. The honeycomb structure inside can completely melt down, causing the cat to become hollow. When a cat completely hollows out you usually won’t notice any symptoms except a check engine light for a bad O2 sensor reading. However, your car will still fail emissions as it will not properly clean the exhaust air.

Symptoms of a Clogged Catalytic Converter

As mentioned previously, symptoms of bad catalytic converts are most likely to occur when your cat is clogged and not fully burned through. If it fully burns though there will be less symptoms outside of a check engine light.

Furthermore, if you have a badly clogged catalytic converter you will also notice performance issues like a loss of power, lack of acceleration, and hesitation while accelerating.

When a cat clogs it sends exhaust gases back into the combustion chamber. This added air throws off the air-to-fuel ratios and ultimately can lead to cylinder misfires. These misfires can then further clog the cat by sending unburnt fuel into the cats.

Another potential symptom caused by the increased backpressure is rough idling. Rough idling can occur due to misfires or fuel pockets burning in the wrong order.

If you have too much backpressure from a very clogged cat it can even cause the car to stall during idling. This is usually caused by the combustion chamber having way too much air in it to ignite the fuel.

If you have an exhaust gas temp gauge (EGT) in your car then you might notice an increase in the temperatures. Exhaust gas is extremely hot and recycling it back into the cylinder can cause engine temps and therefore exhaust gas temps to increase.

Failed cats can also fry the O2 sensors causing them to fail. Additionally, the O2 sensors are responsible for monitoring the effectiveness of the cats so a failing cat will cause a check engine light for bad O2 sensor readings.

You can also get a check engine light for misfires or lean air-to-fuel ratios.

To compensate for more air in the combustion chamber the ignition system will send more fuel into the chamber. This will cause more fuel usage and decreased gas mileage. However, you likely won’t see more than a 1-2mpg decrease so it will be difficult to notice this symptom unless you meticulously track your mileage and driving habits.

Lastly, a bad catalytic converter will cause you to fail an emissions test. However, this can also depend on the type of emissions test you get. You may actually pass an OBD-II test if you aren’t throwing any engine codes. However, you will fail a tail-pipe test.

Overall, driving with a bad catalytic converter is illegal so whether or not you pass emissions it is still something that should be replaced. You might also notice worse smelling exhaust gases coming out of your tailpipe which can tip cops off to a bad cat or lack of cats.

How To Diagnose a Bad Catalytic Converter

All combustion engines create what is called vacuum. Remember when they taught you how to siphon water in middle school science class? Vacuum is similar but with air. Engines suck air in through the intake largely due to the vacuum pressure an engine creates.

If you increase the RPMs above idle speeds and the vacuum gauge drops below where it was at idle then you likely have a clogged cat.

Removing the O2 sensor (or sensors) is likely the easiest testing option. When a cat is clogged air can’t escape quickly enough. When you remove an O2 sensor it gives the exhaust gas another area to escape from. If you remove the sensors and the misfires, rough idling, and other symptoms go away then the problem is probably a clogged cat.

If the symptoms don’t go away then it could indicate a different engine problem. However, because a failing catalytic converter might not exhibit any symptoms this methodology won’t always work. Generally speaking it will work if your cat is clogged but it will not work if you’ve completely burned through your cats.

I hope we’ve beaten it in your head that a clogged catalytic converter causes backpressure. Therefore, a good way to tell if its bad is to test the backpressure. To do this you will need a low pressure tester and to remove the O2 sensors. The low pressure tester will connect to the O2 sensor bung. If you have multiple O2 sensors make sure you attach it to the one that is ahead of the cat.

Of course the simple option is replacing your catalytic converter with an OEM unit. However, this is an expensive option. As we mentioned, cats use rare metals inside of them. Palladium, platinum, and rhodium are not cheap. Therefore, cats are not cheap. Nowadays, cutting catalytic converters off of cars is more popular than stealing cars since they are worth so much and virtually impossible to track once stolen.

So, most people opt for one of two options when it comes to replacing their catalytic converters.

Catalytic converters are restrictive. Honestly the best exhaust system for cars, especially turbo or supercharged cars, is no exhaust system at all. Therefore, there are a lot of performance companies that offer cat replacements for power gains.

The first option is using high-flow catalytic converters, also known as downpipes in turbo cars. High flow pipes have cats in them which makes them legal in most states. They are less restrictive than OEM downpipes as they usually have larger cross-section, or air passages, within the honeycomb structure.

These are a great option for someone looking to keep their car legal and gain a little extra horsepower. Additionally, they are also a bit less expensive than OEM replacements since they have less rare metals inside them.

The second option is to completely remove the catalytic converter. I will note that this will make your car fail emissions testing, will usually cause a check engine light, and is illegal in all states.

However, removing the cats is common amongst performance enthusiasts due to the performance gains achieved. The cat pipe is replaced with a standard exhaust pipe that is completely hollow, meaning it has zero restriction. Therefore, it eliminates virtually all backpressure. For naturally aspirated cars, you are probably looking at power gains of ~5whp. However, for turbocharged cars the gains can be closer to 20-25whp.

Overall, this is a great option for the performance enthusiast. Albeit it does come with the risk of your car getting sent to the crusher.