GM’s LT2 engine was released in the 2020 C8 Corvette. It is a 6.2L naturally-aspirated V8 that produces 495hp and 470lb-ft. of torque. The C8 Corvette is the first mid-engine Corvette ever produced.

The LT2 is part of GM’s Gen V small-block V8 engine family. It is the successor to the LT1 engine which was used in the C7 Corvette and Cadillac CTS-V, not to be mistaken with the earlier generation LT1 engines which were 5.7L V8’s. The LT2 was built off of its predecessor and shares many same features such as compression ratio, block, heads, crank, and pistons. Additionally, it has the same bore and stroke. Fueling is provided by direct injection. Additionally, the LT2 uses active fuel management and variable valve timing.

While the LT2 has only been around for a limited period of time, a number of issues have arisen. We aren’t going to call any of these problems “common” yet as we believe they are mostly over-hyped on the internet. However, we did think it was worthwhile to layout the issues experienced so far.

It’s worth mentioning again that the majority of these problems are blown out of proportion on the internet. With that being said, supply chain issues did lead to some manufacturing defects with various components of these engines which primarily came from bad manufacturing batches. Outside of the problems mentioned above we have seen other complaints around the navigation unit, peeling dashboards, wheels, brakes, and various other smaller electronic items.

There have been a handful of catastrophic engine failures so far. While this has some people concerned since not many C8’s have actually been manufactured yet, the amount of complete failures relative to the amount produced is not alarming to us.

While this isn’t a completely fresh engine due to its similarity with the LT1, it is still a new engine. First year engines and cars are bound to have random problems that arise. Fortunately, Chevy and GM have appeared to be very helpful so far in fixing all of these issues under warranty for $0 out of pocket.

Corvette C8 LT2 engines produced between June 1st and September 15th of 2020 were built with a bad batch of valve springs. This issue also affected a number of other engines such as the LT1, LT4, and so on. This issue was purely a manufacturing defect and does not affect any engines built outside of those dates. GM issues a service bulletin which calls for new valve springs and a cylinder leakdown test to be performed. If the cylinders have leakage the engine will be further torn down and repair or completely replaced as needed.

Valve springs are responsible for keeping the valves sealed when they are closed. As the pushrods move up and the rocker arms move down the valve opens which compresses the valve springs. When the camshaft rotates and the valves need to close, the valve spring provides the necessary pressure to close the valve and keep it completely sealed.

When a valve spring breaks it causes the valve to not properly open or close, causing the cylinder to lose compression. On the C8 Corvette, the most common symptoms are misfires, an engine ticking noise, and some trouble codes.

As mentioned, this problem is contained to only a certain set of C8’s. Any issues will be repaired by Chevy under full warranty.

Unfortunately the C8 Corvette wasn’t offered with a manual transmission. It instead was only offered with an 8-speed dual clutch transmission (DCT). While folks with good transmissions have praised its smoothness, there have been many owners experiencing transmission issues. This problems seems to be the most common out of all the issues on our list.

The TR-9080 DCT transmission, manufactured by Tremec, has been having its fair share of shifting complaints. Owners note that the transmission has issues downshifting, hard shifts frequently, shuttering or bucking, and so on. Additionally, it has issues shifting into 1st gear when stopped and is especially rough from 3rd to 2nd and from 2nd to 1st.

The LT2 intake airbox has two hydrocarbon pads that sit right outside of the intake duct. Their purpose is to absorb any exhaust fumes that reverse out of the engine through the intake system. These pads were first introduced in the C6 Corvette and have been problematic in every corvette since then. 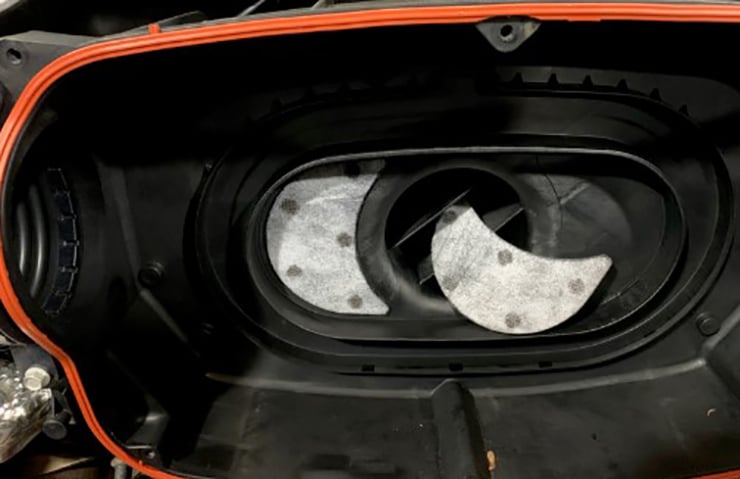 The pads are sealed to the intake housing with adhesive. This adhesive goes bad easily and can cause the carbon pad to get partially sucked into the air duct. When this happens it restricts airflow to the cylinders which can throw off the MAF sensor and air-to-fuel ratios, cause misfires, and set off a number of engine codes.

The pads are too big to be completely sucked into the intake system so there isn’t an issue there. The only issue is the blockage of airflow to the cylinders and the associated problems that creates. Fortunately, fixing this issue is as simple as popping open the intake box and removing the pads. Removing the pads doesn’t cause any engine problems or concerns so we recommend just removing them anyways.

Again, to remedy this issue just remove the pads. The likelihood of them popping off at some point is high so doing this ahead of time isn’t a terrible idea.

Common across all GM engines with the K20 ECM is a cranking but no start issue. This issue arises when the car will continually crank but won’t start. We have seen people reporting that it will crank even for up to a minute long without firing up. It is also common for this issue to only cause long cranks, where the car will start but only after 10+ seconds of cranking.

The extended crank or crank no start issue is caused by issues with the K20 ECM. Chevy and GM released a technical service bulletin blaming the problem on internal issues with the ECM itself. Simply reprogramming the ECM has fixed this issue, although in some cases the ECM needs to be completely replaced.

The biggest tell-tale sign of this problem is the P12A6 engine code.

Is the C8 Corvette reliable? Yes. Does it have some first year problems? Yes. Overall, we don’t have any question as to the reliability of the LT2 engine in the new C8 Corvette’s. It has experienced a fair share of problems so far, but most of them are limited in nature.

Broken valve springs were an isolated event that have since been fixed. While transmission problems appear to be more common, it still isn’t that common and Chevy is fixing these issues free of charge. Carbon pads falling off is small and silly, but it is common. And lastly, the crank no start issue can be fixed with a simple update to the ECM.

The reliability issues and LT2 engine problems have mostly been overhyped on the internet by a few catastrophic engine failures that have occurred with only a few thousand miles on the engines. We have seen bent rods on a twin-turbo setup which has been posted all over the internet, but there are still other C8’s out there pushing serious power in twin setups with the stock rods.

This is a new engine being put into a new chassis. It’s the first mid-engine Corvette produced. So yes, the first year models are going to have their fair share of small problems, and a limited amount of big problems. The good news is that so far GM has been very accommodating to new owners with problems.

We expect a number of these issues to be fixed in the short term and have no concerns over long term reliability of the LT2 engine.