Producing 405hp and 400lb-ft. of torque, the LS6 was pretty stout from the factory for it’s time. However, for you American Muscle folks looking for more power, a traditional cold air intake system might be on your mind. While these LS6 engines can handle a ton of power they aren’t quite as easily modified as forced induction cars. The biggest power gains on the LS6 will come from long-tube headers, upgraded cams, porting or performance heads, stroker kits, and forced induction.

With that being said, traditional bolt-on modifications like a cold air intake can be beneficial under certain circumstances.

The biggest benefit of an upgraded intake is improved air flow. Generally speaking, more power requires more air. Most intake systems, as is true with the LS6, are completely sufficient at stock power levels and when lightly modified. However, when you begin adding more serious mods, the intake becomes restrictive as it is no longer capable of pulling in enough air to supply the horsepower being produced.

Performance Benefits on a Stock LS6

To cut to the point, on a completely stock LS6 an upgraded intake has very few performance benefits. If you are just looking for a little bit of extra power on your LS6 I would recommend starting with long-tube headers and ignoring the intake as an intake won’t be worth its cost. The LS6 intake is actually built really well from the factory and has plenty of air flow. It is actually so good that a ton of LS1 owners swap LS6 intakes and intake manifolds onto their cars.

When you consider a good intake is $500+, it just doesn’t make sense to upgrade for the 2-5hp gains you will see, and the 5hp number on the high end is probably very optimistic.

Rather than dropping a full intake system in, you are best off dropping in a K&N or SLP filter.

Performance Benefits on a Modded LS6

While it might not make sense on stock LS6 engines, modded LS6 engines certainly have a better case for a cold air intake. If you are adding forced induction such as a supercharger or turbocharger you should absolutely upgrade the intake system.

For those not going the forced induction route, it depends on your modifications. If you drop a huge filter into an LS6 with stock heads, a stock intake manifold, etc. the intake is no longer the restriction on air flow. The intake manifold and heads can only hold and flow so much air so they quickly become the restriction.

We recommend upgrading your LS6 intake if you are also upgrading your intake manifold, cams, and heads. Unless you are adding these mods you just don’t need more air than the stock intake can supply.

Swapping an LS6 Intake into an LS1

As I mentioned above, the LS6 intake was built so well from the factory that is actually the most popular choice as an LS1 intake upgrade. Additionally, the intake manifold is also a fan favorite for manifold swaps as well.

The LS6 intake and manifold bolts directly onto the LS1 and provides power gains of nearly 25whp and 20wtq.

Unfortunately, GM has stopped manufacturing these intakes so the only way to get them now is to find them used. For LS6 owners, this is great news as you can sell the manifold and intake combo for near $1,000 to an LS1 owner and use that money to get an upgraded intake and manifold yourself.

For those who are looking to upgrade their LS6 intake system, here are our favorite intakes: 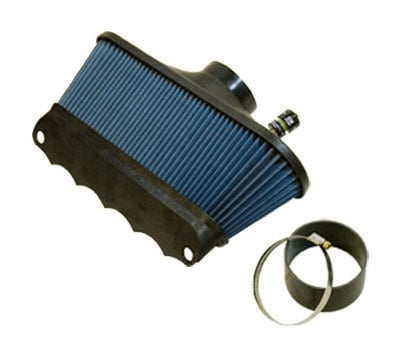 SLP’s Blackwing intake system is going to be the best bang-for-the-buck intake system for the LS6. SLP claims up to 90% improved airflow and up to 18whp power gains. In our opinion, you likely won’t see these gains on a completely stock engine but nonetheless it is a great system for modified LS6’s.

The Blackwing power gains primarily come from the removal of the factory intake box. The SLP filter bolts directly up to the stock intake tubing but eliminates the box, creating an open-air system and increasing air flow. 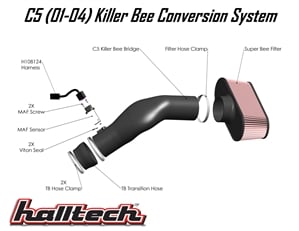 Halltech has two awesome full intake systems for the C5 Corvette the Venom and the Killer Bee. Both of these systems are more expensive because they not only provide the filter, but also provide the intake tubing. Upgrading the tubing along with the filter provides more air flow to the throttle body. Similar to the Blackwing intake, both Halltech options remove the factory air box. 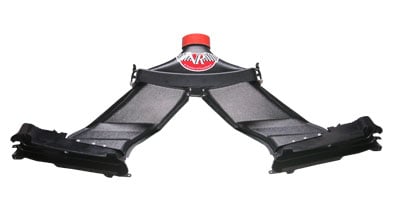 The Vararam intake is the most unique intake system in that it utilizes two intake “scoops” that sit within the front of the bumper to draw in colder air. Out of all the systems this one is the most true cold air intake. The air is routed from the two scoops into an enclosed air filter which then hooks up to the factory intake piping.

Vararam claims “up to 40hp” throughout the RPM range. We’ve seen dyno’s proving about 15whp gains at the peak. For those concerned about air intake temps we recommend the Vararam system. It will flow less than the Halltech and SLP intakes since it is an enclosed system, but will provide a few degree cooler IATs due to its location in the bottom of the bumper.

Should I Upgrade My LS6 Intake System?

Overall, for stock LS6 engines there really isn’t a need to upgrade the intake system. Unless you are planning on running forced induction, or making major modifications like heads, cams, manifolds, etc. then the stock intake provides plenty of air flow.

That isn’t to say that you can’t upgrade your intake on a stock LS6. There is no harm in doing so and you will still see a little power, some throttle response improvement, and even a little gas mileage improvement. The only downside is that the cost in doing so isn’t really worth it for the performance benefits you get, at least in our minds.

You will see the most performance benefit when you couple an intake with more serious mods.

What’s your experience with upgraded LS6 Corvette intakes? Leave a comment and let us know!