The Chevy LS3 is the third engine to be released using Gen IV architecture and was introduced to the world in the 2008 Corvette C6. The LS3 engine acted as the replacement for the LS2 engine that preceded it, becoming the new powerplant for post-2008 base model Corvettes. With the new engine came some notable design tweaks that increased the performance of the LS3 over the LS2. Some of the most significant changes include a larger cylinder bore, better flowing heads, and a more aggressive camshaft. Additionally, and most relevant to this article, the throttle body design was also significantly altered.

While a change in throttle body design certainly isn’t as significant as the LS3’s increased displacement, per se, it introduces the topic of throttle bodies into the LS3 conversation and there’s a sizable amount to talk about. Over the entire LS lineup, there have been a number of different throttle body configurations. They’ve ranged from cable driven, 78mm, three-bolt designs to electronically controlled, 90mm, four-bolt styles. While none of them are bad, there are certainly ones that are better for a particular application.

The world of LS3 throttle bodies is expansive and there are quite a few things to consider. Size, bolt pattern, intake compatibility and drive by cable vs drive by wire are all considerations that you’ll need to think about when getting ready to pull the trigger. In this guide, we’ll cover some of the basics concerning LS3 throttle bodies and point you in the right direction of some that might work for you. 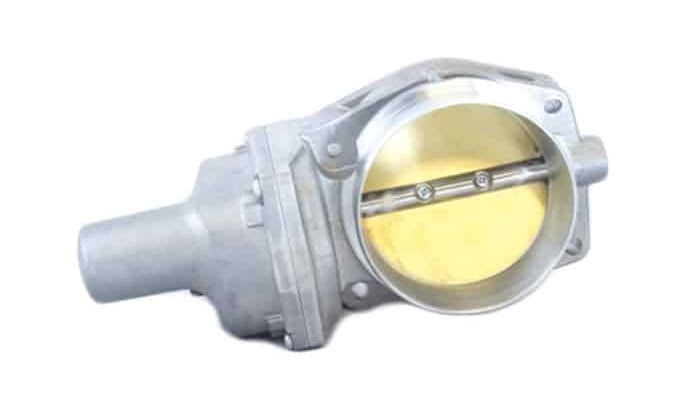 Over the course of the LS3’s production cycle, GM used a couple of different throttle body configurations depending on the model year of the LS3-equipped vehicle. Beginning with the LS2, GM swapped from a three-bolt design to a four-bolt design. That simply means that the newer Gen IV LS engines use 4 bolts to secure the throttle body to the intake rather than three which was common on earlier models.

The LS3 also introduced a different internal blade, which is the mechanism that actuates to let air into the manifold. Previously, the LS2 made use of a 90mm silver throttle body blade. This was then replaced with a gold 90mm throttle blade for the LS3. It’s also important to note that early model 2008 LS3s used the same silver blade throttle body as the LS2. By mid-2008, the LS3 received the gold blade update. With that update came the reversal of the blade direction as well. The top of a stock LS2 throttle blade should rotate towards the manifold opening. The opposite is the case for a gold blade LS3 throttle body.

In addition to the difference in blade color and rotation direction, the LS3 TB also has a different port shape. The LS3 throttle body is built to work with a different E38 PCM as opposed to the LS2’s E40 PCM. That means that the two aren’t interchangeable from a stock wiring and programming perspective. As an end note, 2009+ LS3 engines use the same gold plate throttle body as the LS7.

Over the years, GM has made use of both drive-by-wire and drive-by-cable throttle bodies across the LS engine range. Somewhat surprisingly, the LS1, released in 1997 as the first engine in Chevy’s modern line of small-blocks, featured an electronic throttle initially. However, it was later switched to a drive-by-cable design in 1998.

From the factory, the 90mm gold blade LS3 throttle body is drive-by-wire, meaning that it is electronically controlled by the LS3’s PCM. Drive-by-wire systems work by utilizing an auxiliary throttle position sensor and an idle air control valve to take accelerator pedal readings. They then use a servo motor to actuate the throttle body blade to the desired position. The accelerator pedal and the throttle body servo motor are connected via the LS3’s wiring harness. LS3 drive-by-wire systems are programmable through PCM tuning and can be adjusted to accommodate your driving style.

Despite being an aftermarket modification, quite a few LS owners prefer the analog feel of a drive-by-cable throttle body. Unlike drive-by-wire systems that make use of multiple different sensors and are electronically controlled, a drive-by-cable system is fully mechanical. A drive-by-cable system works by linking the throttle body and accelerator pedal with an actual cable linkage. When you put your foot down, a wire pulls the throttle blade open. This more simplistic design provides instant response which can’t be said for a drive-by-wire system. That is because pedal inputs have to travel through the electrical system first.

The first order of business is changing the factory LS3 crankshaft reluctor wheel to the older, Gen III 24x wheel. The crank reluctor wheel’s job is to send crankshaft position information to the PCM. Older Gen III LS engines use 24x wheels while Gen IV LS engines use more accurate 58x wheels. For the purpose of a drive-by-cable conversion, your LS3 will need the older wheel.

In addition to installing the older reluctor wheel, you’ll also need to install an older E40 LS1 PCM as well. The older reluctor wheel isn’t compatible with the LS3’s factory PCM, so an LS1 PCM is a requirement. You’ll also have to find a way to route the throttle cable from the accelerator pedal to the throttle body. There are plenty of aftermarket manufacturers that sell brackets for that very job.

There are often misconceptions about ported LS3 ported throttle bodies and the porting process in general. The porting process does not increase the throttle body’s internal diameter by any significant margin. Instead, the process of porting is meant to smooth out any imperfections caused by the initial casting process. There is often debris left over from the casting process which can interfere with airflow and velocity. Throttle body porting can either be done by hand or by a CNC machine to remove these imperfections and improve flow.

The Weapon-X team advertises that their ported LS3 throttle body is one of the highest flowing options on the market. It also provides unparalleled dependability. They have backed up that claim by testing their product on their in-house flow bench. Overall, it’s unlikely that you’ll find a better product at a better price.

The premise of upgrading to a larger throttle body is very straightforward. Air is introduced to the intake manifold through the throttle body and more air typically equals more power. A larger diameter throttle body opening allows for a larger volume of air to enter the system. However, the actual performance gains from a larger throttle body are commonly debated in the LS3 forums. The argument arises from the fact that there are plenty of 1,000whp+ Vettes out there running 90mm throttle bodies. Even with forced induction.

With that being said, there are arguments for running a larger 102mm throttle body when combined with a turbo or positive displacement blower. With forced induction, increased airflow is always a benefit, as turbos and superchargers rely on a high volume of air to produce power. While an upgraded intake manifold would likely have a bigger effect on FI performance, a larger throttle body can bottleneck performance if the rest of the system is truly optimized.

The benefit of running a 102mm LS3 throttle body with a PD blower is increased internal pressure which results in increased horsepower. Some members of Corvetteforum.com have reported an increase of around 2 psi, equating to around 50 extra horsepower, by swapping from a stock 90mm throttle body to a larger 102mm throttle body. As we said previously, it is possible to achieve truly insane performance with forced induction and a stock throttle body. However, if the system has been optimized in every other way, the throttle body might be a limiting factor.

There are quite a few quality options if you are in the market for a larger LS3 throttle body. However, one that stands out is the 102mm gold blade LS3 throttle body from BBK Performance. BBK is an American company based out of Daytona Beach. They have been supplying the Ford, Chevrolet, Dodge, and Jeep communities with quality parts since 1988.

Their LS3 102m m throttle body is CNC machined from 356 aluminum and features an OEM quality throttle gear, double sealed bearings, and o-ringed throttle shafts. In terms of quality and reliability, the BBK throttle body is excellent. The throttle body retains an OEM four-bolt connection to be bolted up with stock LS3 fitment. If you want to increase airflow for LS3 forced induction, the BBK-Performance throttle body will get the job done.

The 6.2L Chevy LS3 is one of the most legendary engines around. Its Chevy Gen IV small-block architecture, increased displacement, and extremely strong components make it a fantastic starting point for performance upgrades. While there is nothing wrong with the factory LS3 throttle body, there are some good modifications out there to improve airflow or increase forced induction performance.

One of the most common modifications, especially when swapping an LS3 into an older vehicle, is the drive-by-cable conversion. While you’ll need some additional components like a 24x reluctor wheel and LS1 PCM, the conversion can improve throttle response significantly. If you aren’t interested in going that route, you could always swap the factory 90mm throttle body for a ported one. A ported LS3 throttle body will also increase throttle response by eliminating internal air turbulence.

Installing an LS3 throttle body with an increased bore is another common TB modification. While it is generally concluded that there isn’t a huge performance advantage to doing so with a naturally aspirated LS3, the benefits for a peak-efficiency blower-equipped LS3 are notable.

If you enjoyed this article and are looking for more LS3 content, check out our Best LS3 Engine Performance Modifications Guide. As always, safe driving!