GM and Ford have been locked in a titanic arm wrestling match for the better part of a century. Both manufacturers have helped develop America’s place in the automotive world, flexing their biceps the whole time. It is very unlikely, as a car enthusiast, that you haven’t heard of the Chevrolet Camaro or the Ford Mustang. While there are many aspects that make both manufacturers unique, their insistence on producing high-horsepower, high-displacement V8s is a commonality between the two.

The Chevy LS vs Ford Coyote debate is one that has kept tensions high in the American muscle community. The 6.2L LS was on top of the world for a while before Ford was finally able to clap back with a solid challenger in 2011 with the Gen I Coyote.

Since then, it has been a toss-up. Some argue that the LS’s small form factor and simplicity make it the better and more reliable swap candidate. Others argue that the Coyote’s more sophisticated DOHC and variable valve timing design make it more efficient and better suited for performance driving. Either way, both engines will get the job done.

In this article, we’ll discuss the similarities and differences between the 6.3L Chevrolet LS3 and 5.0L Ford Coyote engines. In doing so, we’ll cover their individual stats and why you might choose one over the other for an engine swap. 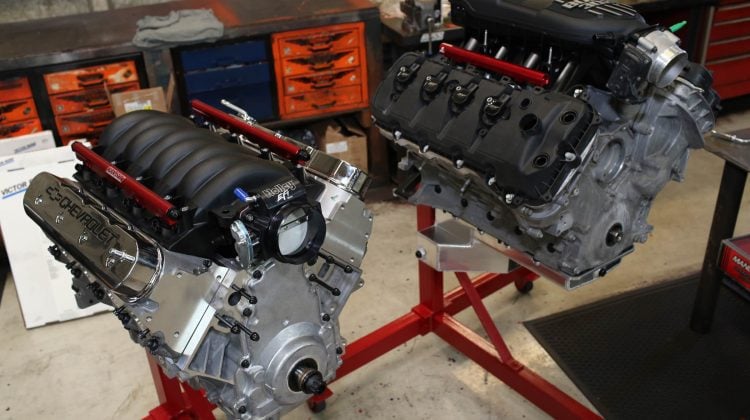 Chevy was the first to introduce a new, more modern, V8 design to their catalog in 1997. The new “LS” series of engines had distinct benefits over the outgoing Chevy “LT” small block. The primary difference was an aluminum block construction which not only reduced weight substantially but also gave the LS better heat dispersion characteristics. As a result, the LS1 debuted with a higher compression ratio and elevated 345 horsepower figure.

Chevy’s LS engine series would continue to develop over the years, resulting in newer generations of the LS format. The “LS3” is perhaps the most popular LS engine in the line. The LS3 was released in 6.2L trim for the 2008 C6 Corvette and is unquestionably a fan favorite.

Throughout the late 90s and 2000s, Ford was left in the dust in terms of their engine technology. At the time, Ford’s modular 4.6L V8 was the best that they could offer. Many Ford enthusiasts saw the 1991-released 4.6L V8 as a slap in the face in terms of its placement in the Mustang GT. This was mainly due to its underwhelming power output and inability to rev as high as the competition.

Ford’s underperformance in the 90s and 2000s is likely why the Coyote received such a warm reception upon its release in 2011. Beyond just being a breath of fresh air as a return to the 5.0L format, the Coyote featured some advanced technical benefits over the LS. A couple of examples include a dual-overhead-cam layout and variable valve timing. The Gen I Coyote debuted with an impressive 412 horsepower. While that is less than the LS3’s power output, it is important to remember that the LS3 has an additional 1.2 liters of displacement.

Since the Chevy LS was the first on the scene, we’ll cover it first. One of the most significant differences between the Chevy LS3 and the Ford Coyote is the LS3’s additional displacement. 6.2 liters is a massive amount of displacement regardless of engine layout. The added displacement is directly correlated with the LS3’s elevated performance stats over the Coyote. The result for the LS3 is a marginal 14 horsepower increase and a slightly more significant 30 lb-ft of torque over the Coyote.

The LS3 is known for a lot of things, but having a modern engine design is not one of them. That is both a good and a bad thing when it comes to the LS3’s construction. The Chevy LS3 utilizes a pushrod valvetrain with a single cam in the engine’s valley. Modern pushrod construction has been around since the end of WWII and remains largely unchanged today. With that being said, the longstanding pushrod design is very well understood and Chevy has mastered pushrod efficiency and strength at this point.

In addition to being well understood, pushrod engines, like the LS3, tend to be lighter and have a better center of gravity. DOHC engines, like the Ford Coyote, have four camshafts that are located above the cylinder head. This adds a substantial amount of weight high up on the engine, which raises the vehicle’s center of gravity. Pushrod engines tend to be more compact as well, as is the case with the LS3 in comparison to the Coyote.

As the last point in favor of pushrod engines, they also tend to be more simply constructed, with fewer parts that have the potential of failing. In a DOHC engine, combustion efficiency and air/fuel mixtures are controlled through a highly complicated computerized system. With fewer moving parts and less complex computer management, pushrod engines are less prone to failure.

While there are plenty of benefits to a pushrod design, they typically don’t rev as high as DOHC engines. The same can be said for the LS3.

While it took a while for Ford to put out an engine that could compete with Chevy’s LS series, the eventual release of the Coyote was worth the wait. Unlike the LS3 which features an antiquated pushrod design, the Coyote uses a more modern DOHC valvetrain with variable camshaft timing. This benefits the Coyote in multiple ways.

In comparison to the LS3, the Coyote revs higher and can withstand longer durations under high rpm loads. DOHC engines, like the Coyote, breathe better than pushrod engines due to their more sophisticated valve design. The Coyote also has a significantly better specific output than the LS3. While the LS3 produces 68.7 hp/L, the Coyote produces 82.4 hp/L. This means that despite the Coyote lacking in overall displacement, it is very efficient.

Another significant advantage that the Coyote has over the LS3 is its use of variable camshaft timing. The Coyote’s valvetrain is the most advanced system in a Mustang so far. Ford’s VCT system works in a similar way to most other variable valve timing systems out there. The Coyote’s intake and exhaust cams work independently of one another based on driving circumstances. The computerized system advances cam timing on each side as necessary for the throttle position.

In a battle of Chevy LS3 vs Ford Coyote, there is no clear winner. Since they are so evenly matched in terms of power and torque output, there are other factors that need to be considered depending on your desired application. Both the Chevy LS3 and Ford Coyote are very popular engine swap candidates. The naturally aspirated V8 configuration of both engines is favored by many over other modern engines with forced induction. Both Chevy and Ford stuck to their roots with the LS3 and Coyote, which many enthusiasts appreciate.

Both engines are relatively common and can be purchased from their respective manufacturers as crate engines. However, many enthusiasts looking for a swap candidate source these engines from crashed or wrecked vehicles. In that case, it is much easier to find an LS3 outside of ordering one directly from a Chevy parts supplier. In total, 207,223 C6 Corvettes were made by Chevrolet. Despite not all having the LS3 engine, the majority of C6s were sold with the LS3. In contrast, only 54,435 Mustang GTs with the 5.0L Coyote were produced between 2011 and 2012. For that reason, it is much easier to find an LS3 Corvette donor car than it is to find a Mustang GT donor.

As we stated earlier, donor cars aren’t the only way to get your hands on either an LS3 or 5.0L Coyote. Both engines can still be ordered directly from either Chevrolet or Ford, or through an independent supplier. Due to the LS3’s simple construction, it is the cheaper engine. GMPerformanceMotors.com sells a full LS3 crate engine for $7,848.00. Since the Coyote features a more modern engine design and construction, they are typically more expensive. JEGS lists a full Coyote ready to be installed for $8,851.00.

At this point, both the LS3 and Coyote have been dropped into nearly everything under the sun. It is common to see both engines in vehicles that they simply don’t belong. For example, LS3s are a common swap choice for JDM cars like the FD RX-7 and Mazda Miata. Due to the higher pricepoint of the Coyote, swaps are less common but are still frequently done.

In a motorsport or performance driving setting, there are arguments for both engines. Due to the LS3’s sheer durability and low-end torque, they are a common option for those in the drifting community. The Chevy LS has a lot of racing pedigree as far as Trans Am racing series are concerned as well. Despite the LS3’s comparably low redline when side by side with the Coyote, its sheer power and reliability make it a great option for nearly any racing application that you can imagine.

Swapping a Ford 5.0L Coyote into a vehicle that it wasn’t designed for is a bit more of an ordeal. Since the Coyote features a DOHC valvetrain, it is a significantly larger engine than the LS3. For that reason, it isn’t the best swap option for smaller vehicles with less space in the engine bay. With that being said, it is still a great option as far as a high horsepower V8 swap is concerned. The DOHC valvetrain configuration and variable cam timing are a huge benefit in performance driving applications. The higher redline and steady power delivery make it a beast on the track.