Chevrolet first introduced the Traverse as a successor to the popular Trailblazer in 2009. First debuted at the 2008 Chicago auto show, Chevy aimed to offer another affordable large to mid-size SUV to build off the success of previous similar models. Now in its second generation, the Traverse has established success in the American automotive market for drivers seeking a practical everyday driver. Yet, with a new Blazer being introduced in 2019, will the Traverse maintain its sales well enough to sustain itself in the Chevrolet lineup?

The Traverse may not be considered to be unique or dynamic in terms of design. Yet, the Traverse does seem to meet some of the standards that many SUV drivers are seeking. With the mid-size SUV market booming, Chevrolet needed to fill a void by producing what the country was demanding. Thus, the Traverse was introduced. But, how does the Traverse stack up against some of its similar competitors? Throughout this guide, we will examine and discuss the Chevrolet Traverse’s overall value. Also, further comparing the Traverse to similar models within the automotive market. No car is perfect or flawless, including the Traverse. This examination will further detail some of the design flaws and potential weak points of this model.

Let’s lay out some of the pros and cons of this model, hopefully clarifying any questions that readers may have about Chevrolet’s popular mid-sized SUV. With that said, let’s now jump into the basic engine specs of the second-generation Chevrolet Traverse below. 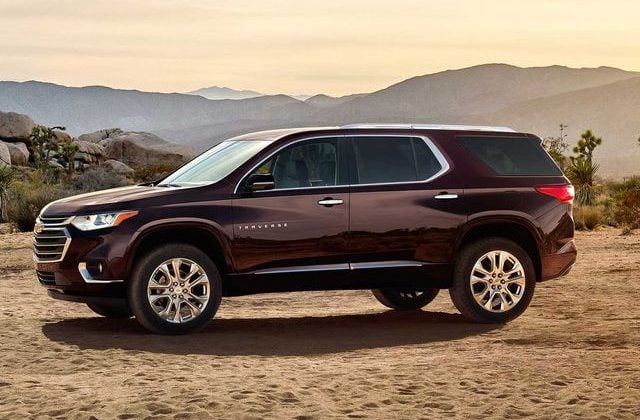 The basic engine specs for the second of the Chevrolet Traverse are as follows:

Chevrolet aimed to produce a balanced SUV with affordability, practicality, and ample performance value. The Traverse utilizes a V6 direct-injection engine that maxes out at 310 horsepower and 266 lb-ft of torque. In addition, the engine design uses a cast aluminum block and head with iron liners aimed to reduce overall weight. Overall curb weight for the Traverse is 4,310 lbs with a ranging towing capacity of 1,500 to 5,000 pounds based on the configuration type. Since the 2022 Traverse is offered in five total different configurations, we have listed them with each of their associated starting prices below:

Due to the varying configurations and their price range, expectations for the Traverse can vary. However, there seems to be a lot to be desired in terms of engine quality. The Traverse seems to be plagued with varying problems compared to many SUVs today, regardless of configuration type. So, let’s examine some of those problems and the overall reliability of the Chevrolet Traverse further below.

Unfortunately, the Chevrolet Traverse tends to be rated on the lower side of the spectrum in terms of reliability and longevity. Issues are not extremely prevalent in the engine design. However, when problems arise, they tend to be more severe than in comparably sized SUVs of the modern era. This doesn’t mean that the majority of Traverse drivers will run into problems that produce catastrophic damage or require pricey repairs. Yet, this does mean that time-consuming and expensive repairs are more prominent than mid-size SUVs from other manufacturers. With that said, let’s jump into some of the most common problems associated with the Traverse below before jumping into a conclusive verdict on the model’s overall reliability.

Collective issues with the transmission have followed the Chevy Traverse from its initially introduced first generation in 2009 to some of its most recent production years. Such issues are severe enough to cause complete transmission failure. Due to the prevalence and severity of this issue, it makes the top of our list.

Many drivers report problems resulting in poor acceleration and inability to properly maintain speed, especially after surpassing the 75,000-mile mark. Many of these associated problems resulted in complete transmission replacement or a wave clutch plate replacement. Regardless, both issues result in extremely costly and time-consuming repairs. In response, Chevrolet posted technical service bulletins (TSBs) and extended the service warranty on various models. However, certain older models or used cars may not be under warranty and therefore are prone to these transmission faults.

Yet even with extended warrants and dealership caution, some drivers report transmission failure or associated issues before even reaching the 5,000-mile mark. In summary, the Traverse’s transmission itself does not have the best reputation. Therefore it’s essential to identify any transmission issues before they develop further or leave you stranded and out of pocket!

Air conditioning issues, mainly surrounding the a/c compressor, are commonly reported much quicker than anticipated for many Chevy Traverse drivers. Specifically, drivers report a/c compressor problems occurring with time and wear at higher mileages. Around the 100,000 mile mark, the Traverse’s a/c compressor can begin to fail and require a costly repair ranging upwards of $1,000 or more. This problem seems to be most commonly associated with the 2012-2016 Traverse model years.

There are no present recalls for the air conditioning or compressor failures surrounding these specific model years. Drivers must be keenly aware of any unusual symptoms that may indicate a problematic air conditioner. Unfortunately, this seems to be another nagging issue on our list of problems surrounding the Chevy Traverse.

The Chevy Traverse also has problems surrounding certain airbag components. Fortunately, this problem is most commonly connected to the 2014 Chevrolet Traverse. That being said, airbag problems are extremely crucial due to the safety hazard that they may represent. So, if an airbag indicator light pops up on your dash, please repair this problem immediately before driving further and putting yourself or any passengers in danger.

Additionally, Chevrolet issued further TSBs acknowledging problems surrounding faulty airbags for the Traverse. Luckily, this problem shouldn’t be as costly compared to certain other issues that made our list. Yet, again, this might be one of the most severe problems because it revolves around your safety. Therefore, it’s always imperative to fix any airbag components immediately once identified.

Timing chain issues can be a severe problem for the Chevrolet Traverse. Again, this is an issue most synonymous with one specific year, the 2012 model. Aside from the fact that it may occur most commonly in the 2012 Traverse, timing chain issues are also reported by newer era Traverses as well. Faulty timing chains can result in various symptoms including:

Since timing chain issues may be associated with other engine components, some drivers also reported problems resulting in traction control failures. If you have a 2012 Chevrolet Traverse, check your timing chain’s status and schedule any needed repairs or replacements quickly before further engine damage occurs.

In summary, various other engine issues are also worthy to mention for the Chevrolet Traverse. The following problems below can be found in both generations of the Traverse and may also indicate issues leading to further severe engine damage.

Specifically affecting the 2009 to 2011 Traverse models are various steering problems. Most drivers online are recording issues regarding steering or turning past the 75,000-mile mark. Due to various potential causes, steering repairs can range upwards of $1000. This is just yet another reminder to properly maintain and prioritize repairs before creating dangerous driving situations or further severe engine system damage.

Lastly, we must mention the Chevrolet Traverse’s oil leaks and excessive oil consumption problems. Specifically, the initial 2009 Traverse model had blatant issues with high oil consumption. These issues became most prominent, surpassing the 100,000-mile mark. In December of 2020, Chevrolet issued yet another TSB warning drivers and mechanics of the various oil consumption problems that may occur. This problem may not be typical for most current-gen Traverse drivers, yet is reported too often to disregard for older Traverse models. With that said, we simply cannot give the Chevrolet Traverse a rating higher than below average in terms of reliability due to its many associated flaws and the likelihood of their occurrence.

Due to the vast amount of commonly reported problems and the likelihood of the occurrence of severe issues, it is hard to respect the overall reliability of the Chevrolet Traverse. Furthermore, reputable review companies continue to rate the Traverse extremely low in its category/class. For example, Repair Pal rated the Traverse 3.0/5 in terms of reliability, Thus placing the Chevrolet Traverse as 22nd out of 26 mid-size SUVs manufactured in 2022.

The problems listed above are too vast and too common before reaching high mileage to disregard. Due to the fact that Chevrolet has reintroduced the Blazer, alongside the TrailBlazer, some may question if the Traverse will soon become obsolete. Regardless, it’s important to note that many Traverse drivers may never experience these issues, especially with the practice of proper maintenance and repairs. Ironically though, the newer generations of the Traverse are receiving high safety scores. For instance, Car and Driver have rated the 2022 Traverse a 9.8 out of 10 in terms of overall safety. This may be a conflicting result considering many of the problems we examined revolve around safety. Yet, the Traverse does have its strengths and decent value, leading to success in the current American automotive market.

What the Traverse lacks in overall reliability or durability, it seems to make up for in terms of practicality. It seems that only time will tell if the Traverse will increase its reliability and durability or slowly digress. Let us know in the comments below your experience with the Chevrolet Traverse, and if any of these problems affected your perspective of the model’s overall value!