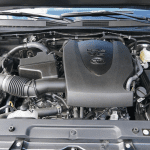 The Toyota 2GR-FKS was first introduced in 2015 as an evolution of the 2GR-FSE 3.5L V6 engine. The 2GR-FKS began as a replacement for the FSE in Lexus models, but eventually made its way into the Camry, Tacoma, Highlander, and several others. It shares the same overall design but adds a simulated Atkinson cycle for better efficiency. With 278-318 horsepower the FKS engine … END_OF_DOCUMENT_TOKEN_TO_BE_REPLACED