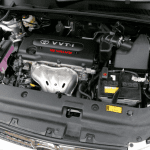 The Toyota 2AZ-FE is a 2.4L inline-4 engine that began production in 2000. It's primarily known for its use in the Camry, RAV4, Scion tC and xB. However, the 2AZ engine is in many other models spanning from 2001-2015. The 2.4L engine offers 160-177 horsepower and 162 lb-ft of torque. Performance may be lacking by modern standards, but the 2AZ-FE delivers good reliability and … END_OF_DOCUMENT_TOKEN_TO_BE_REPLACED