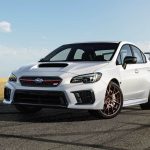 Subaru’s presence in the world of performance sedans cannot be overlooked. Beginning in the early 1990s, Subaru’s racing heritage has proven fruitful, to say the least. The WRX was released in the US as a production car in 2002, with the STI following in 2004. Since then, the WRX and STI have become staples of the JDM scene in the US. In a titanic battle of Subaru WRX vs STI, … END_OF_DOCUMENT_TOKEN_TO_BE_REPLACED

EJ257 WRX STI Engine The Subaru EJ257 2.5L turbo engine made its debut in the 2004 Impreza WRX STi. It's still in use in the WRX STI models to this day. Many love these flat-four boxes engines for good reason. The STI models also have plenty to offer outside of just the EJ257 engine, but that's beside the point. EJ257 engines deliver 300 to 341 horsepower and 290-330 lb-ft. … END_OF_DOCUMENT_TOKEN_TO_BE_REPLACED