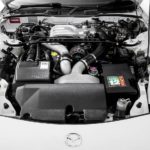 Mazda's 13B Rotary engine was initially launched in 1973 in the Mazda RX-4. With a lifespan of almost 40 years, the 13B is the most produced rotary engine used in production cars. With respect to the RX-7, the 13B was first used in 1984 FB GSL-SE models. The 13B is part of Mazda's Wankel Rotary engine line, named after Felix Wankel, the inventor of the rotary engine. Prior … END_OF_DOCUMENT_TOKEN_TO_BE_REPLACED