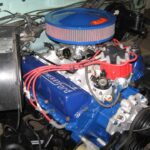 The Ford 460 engine is Ford's longest running big block V8, produced from 1968 until 1998. The 460 engine is a 7.5L big block V8 which produced power levels ranging from 197hp to 245hp over its 30 year history. Throughout the years Ford's 460 engine received a number of updates, improvements, and complete redesigns. The 460 is part of the 385 Lima engine family, a family of … END_OF_DOCUMENT_TOKEN_TO_BE_REPLACED