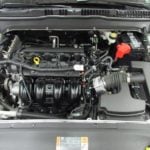 Ford's 2.5L Duratec engine, also known as the Duratec 25, is a naturally aspirated inline-four cylinder engine used from 2009-2019. The I4 Duratec was built in partnership with Mazda, and is based off of the Mazda L5 engine. The 2.5 Duratec produced 156-175hp and 136-172lb-ft. of torque. Ultimately the 2.5 Duratec was retired in 2019 in favor of Ford's new EcoBoost engine … END_OF_DOCUMENT_TOKEN_TO_BE_REPLACED