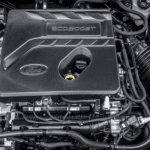 Ford 1.5 EcoBoost Engine Problems The Ford 1.5 EcoBoost turbo engine came out in 2014 as a slightly smaller version of the 1.6L engine. This was in part due to Chinese vehicle taxes, which are a lot lower for 1.5L or smaller engines. Despite the slight downsize the engine still offers similar performance to the 1.6 EcoBoost. Power is nearly identical at 181 horsepower for the … END_OF_DOCUMENT_TOKEN_TO_BE_REPLACED