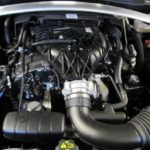 GM's LFX engine was released in model year 2012 as a replacement to the LLT engine. The LFX is a direct-injected 3.6L V6 engine producing 301-323hp and 262-278lb-ft. of torque. Its predecessor, the LLT was released in 2006 in various GM cars. The LFX debuted in the Chevy Camaro LS and received an updated cylinder head with integrated exhaust manifold, new fuel injectors, … END_OF_DOCUMENT_TOKEN_TO_BE_REPLACED