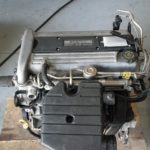 GM's 2.2L Ecotec debuted in 2000 in the Saturn LS1 and was produced until 2011 when it was retired in favor of the 2.4L Ecotec. The 2.2 Ecotec is found in multiple GM brands such as Chevy, Pontiac, Oldsmobile, and Saturn, as well as Opel and Holden internationally. The 2.2L Ecotec was predominantly manufactured under the L61 engine code. In 2007, the L61 2.2 Ecotec received … END_OF_DOCUMENT_TOKEN_TO_BE_REPLACED