The Chevrolet Camaro SS is one of the most iconic pony cars in history. Chevrolet originally introduced it in 1967 to compete with the Ford Mustang, and from then until 1970 it was one of the best performing and best selling cars of the era. Unfortunately, emissions restrictions and other issues caused a severe drop in performance starting in 1971, and Chevy discontinued the SS trim from 1974-1995. When it returned in 1996, Chevy gave it the 5.7 L LT1 V8, which made 305 hp. From 1996-2002, the Camaro SS was a good performer, but Chevy discontinued it after 35 years due to declining sales.

One of the best and most popular mods for people looking to get even more power out of their LT1 is a cold air intake (CAI).. They are easy to install, relatively inexpensive, and they add a noticeable gain in performance. They also make the car more fuel efficient, spruce up the engine bay, and increase the sound of the engine.

This guide will cover everything you need to know about upgrading from the stock intake on your Camaro SS. We’ll talk about what they are, the different styles available, numerous benefits, and give our recommendations for the top performers. Let’s get started! 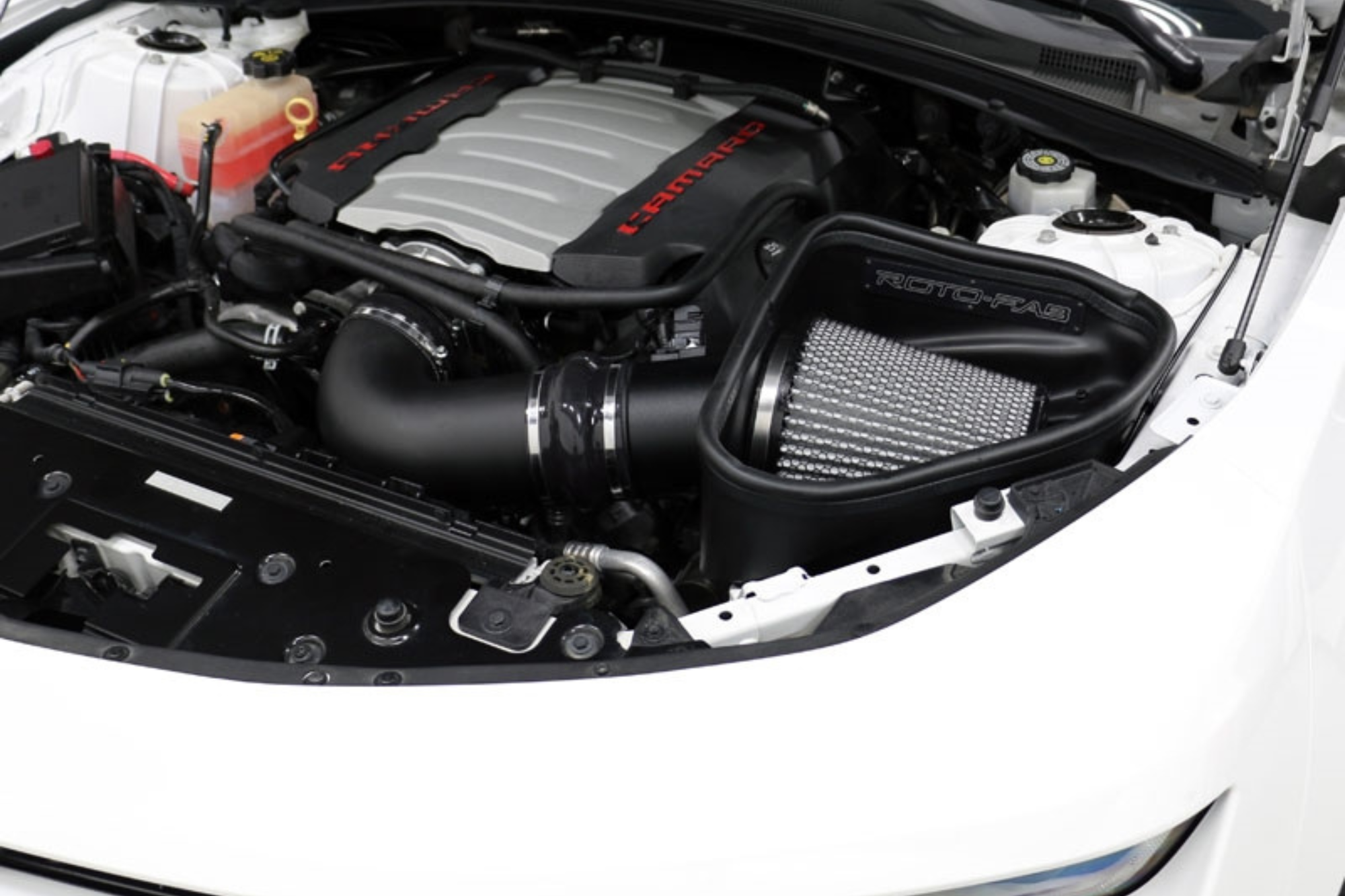 As we just mentioned, there are a ton of reasons for upgrading the stock intake on your 6th Gen Camaro SS. The stock intake is decently well designed, but compared with aftermarket versions it’s considered restrictive. Upgrading to a performance intake on the LT1 Camaro SS will add power, efficiency, look good, and reduce weight.

The main ways that performance intakes increase power is by having an intake filter that is larger than stock coupled with less restrictive intake piping. The larger filter allows for more air to be sucked in, and the smoother piping design reduces air turbulence. Both of these combine to increase both the volume and velocity of airflow through the intake system. The way to increase power in an engine is by adding fuel and air, and performance intakes are the best way to start this.

There are generally two types of performance intakes: cold air intakes and short ram intakes. The difference between the two is the length and location of the intake piping and air filter. Short rams have the least amount of piping possible, which places the air filter very close to the engine in the bay. Cold air intakes have longer piping than short rams. This allows them to relocate the air filter further away from the engine, typically near the wheel well or fender area.

Cold air intakes get their name because the further away from the engine you can pull in air the colder that air will be. Cold air is beneficial for engines because it has more oxygen than hot air, which means better performance. Short rams are advantageous because of the minimal intake piping length, leaving the shortest distance for air to travel on the way into the engine.

On the Camaro SS cold air intakes are preferred, but to be honest the difference is incredibly minimal. Due to the size of the 6.2 L LT1 V8 and the small engine bay, there really isn’t much room to relocate the filter. Most short rams and cold air intakes look almost identical, except cold air intakes generally have an airbox. Airboxes are important because they help isolate the filter from the engine and thus mitigate some heat soak.

The stock Camaro SS intake is actually already somewhat of a cold air intake, as the filter is sitting as far away from the engine as possible. The gains you get from Camaro SS performance intakes is going to be the increased flow and volume of air.

For the Camaro SS, there are very few completely open intake systems, and most of them are actually hybrid style. They have ¾ airboxes, which allows at least one side to be fully open to grab in air. This makes performance intakes on the Camaro SS’ 6.2 L LT1 the best of both worlds: partially open and closed.

The most noticeable advantage of upgrading your Camaro SS intake is going to be the power increase. Adding just an intake by itself will net between 5-15 whp/wtq at peak power. You will also notice increased throttle response everywhere in the powerband, even at low engine loads during cruise speeds. Most of this, as we mentioned, is from the increased flow and volume of air coming through the larger than stock intake.

However, performance benefits are not the only reasons to upgrade your stock Camaro SS intake. With the more open style intake system, you will hear the sweet sounds of the LT1 more prominently. You will also see a small improvement to gas mileage, though to be honest it’s relatively minimal.

Another advantage of an aftermarket intake is going to be how it makes your engine bay look. The stock system has textured piping leading to an oversized and unfortunately shaped plastic airbox. Aftermarket intakes have much smoother and nicer looking piping than OEM, making them look clean but aggressive. The airboxes are also much more stylish and allow you to see the massive K&N cone filters in the bay.

The number one option on our list is the Roto-Fab CAI with sound tube delete. Within the Camaro SS community, the Roto-Fab CAI is by far the most sought out and highest reviewed. It has consistently shown the biggest gains on dynos and in the real world, and is highly recommended by tuners. Gains with the Roto-Fab are 10-15 whp/wtq, making it a top performing option.

The Roto-Fab has an airbox but it is open on top. This leads to good heat shielding while also allowing for optimal flow. The sound tube delete does not diminish the sound, as the intake by itself makes more noise than stock. However, it does get rid of the gimmicky device inside the piping, allowing for a completely smooth elbow design for max flow and volume.

The Roto-fab Camaro SS intake has a massive K&N filter on it, a big improvement over the stock panel filter. The cone shape allows for more surface area and a better flowing design. We highly recommend the Roto-Fab for all Camaro SS build levels, big and small. It performs incredibly well under all conditions, and has dyno proven results.

The second intake on our guide is the officially released performance intake from Chevrolet. Cold Air Inductions actually designed the intake, and they also sell a version of it on their website. The intake was officially discontinued by Chevrolet for the 2023+ models, but is still available through Cold Air Inductions.

Chevrolet claims restrictions are decreased by 17% using their intake, and CAI says the intake makes up to 13 whp. It is a similar design to the Roto-Fab, but the filter appears slightly smaller and the airbox design is different. The Chevrolet performance intake has the opening for the airbox on the side instead of on top. This allows for pretty good flow while keeping the filter as close to the fender as possible. The airbox on this intake is also insulated and the intake piping is thermal coating, allowing for the best possible heat dissipation.

Like the Roto-Fab, the Chevrolet performance intake is a good option for builds of all sizes, big and small. It is a big improvement over stock and looks great in the engine bay. Being Chevrolet’s own approved intake does give it some more credibility, though it likely doesn’t perform much better.

Our next recommended Camaro SS intake is the Mishimoto performance air intake system. Mishimoto is a very reputable manufacturer in the intake and performance industry, and their Camaro line is very good. Within the community, it is well reviewed and noted for unlocking fantastic LT1 sounds while looking very sharp.

Mishimoto claims gains of up to 14 whp/wtq with just their intake alone on the stock tune. This comes from the silicone intake elbow and larger K&N filter. The elbow is wire-reinforced and is available in three different colors, black, red, or blue. The system also has a heat-resistant, glass-reinforced nylon MAF sensor housing and integrated air straightener molded by plastic injection.

Mishimoto’s Camaro SS performance intake is a great option for any LT1 build. The larger piping will be able to keep up with as much airflow as you will need, and the powder coated airbox is great at reducing heat soak.

The final recommendation for upgraded Camaro SS intakes are K&N’s two performance air intake systems. There are two systems, the 63-3092 and the 71-3092. The 63 is cheaper than the 71 and actually produces more horsepower and torque. The 71, however, is the “Blackhawk Induction” air intake that features a powder coated intake elbow and blacked out filter. Style wise, the Blackhawk definitely takes the cake, but it’s a pretty close call for performance. Not to mention a $130 price difference.

Both systems come with the same style elbow, filter, and steel airbox, the color is the only difference. K&N have long been recognized as one of the leading air intake manufacturers in the industry, and nearly every intake system uses their filters. Their Camaro SS intakes perform adequately, but they do have room for improvement.

We recommend the K&N intake systems for lower level Camaro SS builds. They are definitely good selections for builds reaching below 600-700 hp, but anything above that and you might find yourself upgrading your intake, again. They are a little more restrictive than our other options, mainly due to the lower quality intake elbow. Still, they do perform fine on smaller builds as a single mod.

Intake upgrades on the Camaro SS are fun mods that increase performance while providing aesthetic pleasure. You can gain 5-15 whp/wtq with a new intake, and it’ll make your car sound more aggressive and spruce up your engine bay. Tuning is not necessary with an intake upgrade, though it will definitely help squeeze out more power. We looked at a variety of intakes in our guide and all of them are solid choices.

The hands down winner is going to be the Roto-Fab CAI with the sound tube delete. It offers the best mix of performance, design, reliability, and style. The Mishimoto and Chevrolet performance intakes are both pretty similar in terms of performance, design, and price. You can’t go wrong with either one for your build, though the Mishimoto intake does have a slight advantage in price. If you’re just looking for the standard K&N intake for your Camaro SS you can look at both their 63/71-3092 options, but those probably aren’t going to be the best performers.

Whatever intake you go with you will be happy with the results. They all offer solid performance gains without breaking the bank too much.

Are you considering an upgraded intake on your Gen 6 Camaro SS?