Turbocharged engines are complex systems. For a turbocharged engine to function correctly, there are a lot of internal factors that must be regulated. That is especially true for air temperature and air pressure. For those unfamiliar with the acronyms “BOV” and “BPV,” they stand for blow off valve and bypass valve respectively. The overarching purpose of both of these devices is to regulate air pressure in a turbocharged system. Without regulating excess pressure, turbo damage can occur.

In this guide, we’ll break down the function of both blow off and bypass valves and discuss why some people opt for one or the other. 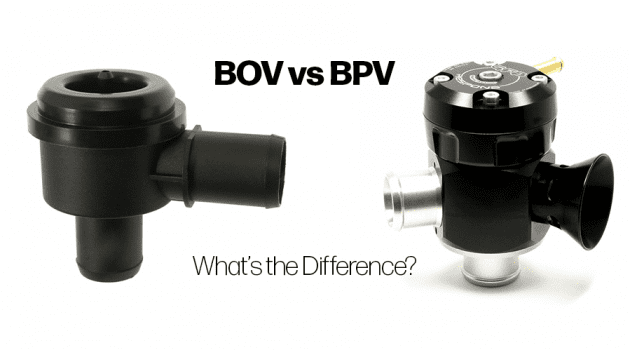 BOV vs BPV – Why Do Turbocharged Cars Need a Blow Off / Bypass Valve?

To understand why turbocharged engines need a blow off/bypass valve, you have to understand a bit about how a turbo system works. In most basic terms, a turbocharger intakes air, cools it, and feeds pressurized air into the engine. Exhaust gas spins a turbine on one side of the turbo. The turbine then spins another fan on the opposite side, called the compressor, which draws fresh air into the turbo system.

When you let off the gas, the throttle body closes, meaning that air is prevented from entering into the combustion chamber. If you let off the throttle under boost, a rush of compressed air travels through the turbo system and is immediately stopped at the closed throttle plate. At that point, the pressurized air has nowhere to go besides back to where it came. The air is forced back into the turbo, which then interferes with the compressor wheel. This is called ‘compressor surge’ and can damage your turbo’s wheel shaft and bearings. Ultimately, if compressor surge is severe and frequent, it can kill turbo response and overall drivability.

What is the Solution to Compressor Surge?

So, the overarching issue is that when an engine’s throttle plate closes, there’s nowhere for the excess boost to go. There are a couple of solutions to that issue, as it turns out. One solution is to get rid of the excess pressure entirely by installing a valve in the intake piping of a turbocharged engine that vents to the atmosphere. The other is installing a different kind of valve that recirculates that pressure back to the turbo’s inlet.

BOV vs BPV – How Does A Blow Off Valve Work?

Now that we’ve discussed how compressor surge happens, we can break down blow off valves and bypass valves each work to solve the problem. We’ll start with blow off valves. Blow off valves take a more direct approach to dealing with excess pressure in a turbo system when the throttle plate is closed. They simply vent the excess air into the atmosphere.

Blow off valves are typically installed on an engine’s intake plumbing between the turbocharger compressor and the throttle plate. There are three primary components inside a blow off valve’s main housing including a spring, a diaphragm, and a valve.

What are the Downsides of a Blow Off Valve?

While BOVs solve the compressor surge issue, they can have negative consequences if they vent all excess air into the atmosphere. On turbocharged engines with mass airflow sensors, venting to the atmosphere can disturb ECU air/fuel ratio readings. That can cause your vehicle to run rich, as the ECU will fail to accurately fuel the engine. If the ECU doesn’t fuel the engine correctly over a long period of time, damage can occur.

Additionally, when the excess boost is vented to the atmosphere, none of it remains in the turbo system. The result is turbo lag, as the turbo has to intake fresh air again, which takes a bit of time.

BOV vs BPV – How Does A Bypass Valve Work?

Bypass valves generally keep internal pressures at a much more stable level compared to a blow off valve. The result is better throttle response and more predictable turbo behavior. An additional pro of bypass valves is that they typically reintroduce air into the system following the MAF which means that the engine’s ECU doesn’t have to compensate for the lost air.

Bypass valves decrease turbo lag, as the excess pressure remains inside the turbo system. That means that there is air ready to be introduced into the turbo inlet immediately. That differs from how BOVs work, as they don’t have the advantage of immediately reintroducing air into the turbo. Ultimately, a bypass valve has fewer downsides than a vent-to-atmosphere blow off valve due to this.

Most vehicle manufacturers that offer high-performance turbocharged vehicles opt to use bypass valves in favor of BOVs. Bypass valves tend to be the quieter option as they don’t produce the loud vent noise that BOVs do. They are also favorable from a performance standpoint as they reduce lag and increase throttle response.

What is a Hybrid Blow Off Valve?

Over time, aftermarket manufacturers have experimented with the BOV formula and developed a middle ground between a BOV and BPV. They are most often called hybrid blow off valves. While a more traditional BOV vents the entirety of the excess boost pressure into the atmosphere, a hybrid valve is adjustable. That means that you can manually control how much air is vented and how much is recirculated back into the system.

Ultimately, this is the optimal setup for a high-horsepower build, as you get the benefits of a blow off valve and recirculating valve without any of the downsides. If the large turbo on your build is producing a ludicrous amount of excess pressure, a large amount can be vented and a relatively smaller amount can be recirculated back into the turbo to decrease lag and improve throttle response. As a small added bonus, you’ll still get a bit of noise from the atmospheric dump as well. It goes without saying that a hybrid valve also eliminates the risk of compressor surge as well.

BOV vs BPV – Which is Better?

Choosing between a blow off valve and a bypass valve boils down to a few different factors. The BOV vs BPV argument can sway both ways. Both systems are very efficient at eliminating excess pressure within a turbo system and preventing compressor surge. With that being said, there are reasons for choosing one over the other.

As we stated earlier, vehicles with a MAF-style intake system generally do better with a bypass valve. This, once again, is due to the fact that blow off valves can interfere with electronically metered systems, as there is no way for a vehicle’s ECU to accurately compensate for the lost air once it is vented to the atmosphere. Bypass valves create a closed system within a turbo system. Therefore, all of the air within the system is accounted for.

That doesn’t mean that BOVs are a bad choice overall, just for moderate-horsepower, MAF-style, turbocharged engines. Blow off valves are actually favorable on high-horsepower turbocharged vehicles. The issue with running a bypass valve on an engine pushing extremely high boost is airflow. Generally speaking, it is hard to find a recirculating, or bypass, valve that has enough airflow to be able to recirculate the amount of pressurized air that a large turbo pushes. The physical construction of most bypass valves can’t withstand that amount of air volume.

For high horsepower applications, a blow off valve is the better choice. That is because BOVs are much more efficient at eliminating excess pressure from a turbo system. Unlike a recirculating valve that has physical constraints as far as airflow is concerned, a blow off valve can eliminate any amount of pressure almost instantaneously.