The BMW 335i was available from 2007 to 2015. Two primary engines powered the 335i – the N54 and N55. Both engines are 3.0L inline-6 turbocharged engines. However, the older N54 engine utilizes twin turbos while the N55 is a twin-scroll single turbo. Despite the differences in turbos most BMW 335i models pump out the same 300 horsepower and 300 lb-ft of torque. In this article, we break down 335i horsepower and torque by timeline and discuss more about the HP potential of the cars.

BMW 335i horsepower and torque by year is as follows:

As you likely noticed, the standard 335i makes 300 horsepower and 300 lb-ft of torque. That number virtually didn’t change during the 9-year run of the 335i. Even despite the change in engines and moving from twin turbos to a single turbocharger.

It’s generally accepted that the 335i horsepower and torque ratings are on the conservative side. That said, it is hard to say the 335i is underrated with certainty. You would need to remove the N54 and N55 engines from the cars and hook them up to an engine dyno. Otherwise, a chassis dyno reads the power and torque to the wheels, which you then have to make an assumption on drivetrain losses.

A loss of roughly 10-12% is a more realistic assumption than the 15-20% some state. Anyway, using the lower assumption the 335i still delivers more than its 300hp and 300tq rating. Below is an example of a typical stock 335i. 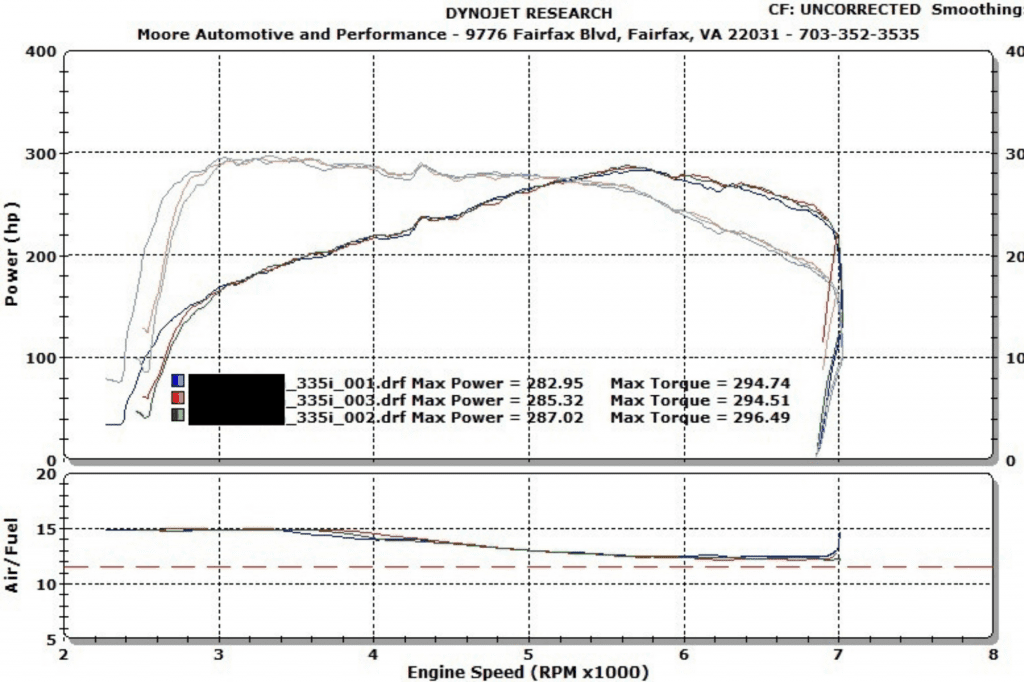 Here we see the BMW 335i delivering up to 287 horsepower and 296 lb-ft of torque to the rear wheels. Again, drivetrain losses occur and 10-12% is a fair assumption for cars of this era. The dyno was done on a DynoJet, which do read a bit more favorably. Still, we can calculate roughly:

Now, this is where the BMW 335i is truly underrated from a performance aspect. Regardless of stock output, the 335i is capable of immense power with tuning and simple upgrades. The purpose of this article was pretty simple – to discuss the 335i horsepower rating of 300hp and 300 lb-ft. As such, we won’t dive into a lengthy topic about tuning and mods. Instead, we’ll give a quick breakdown of BMW 335i horsepower potential:

The 335i with stock turbos is capable of making upwards and beyond 500 horsepower at the crank. However, the N54 vs N55 is an important subject here. BMW N54 engines with factory twin turbos are generally more capable. The N54 can make upwards of 500whp on stock turbos while the N55 maxes out around 425whp.

Point is – the 300hp rating may seem underwhelming for a 3.0 inline-6 turbo engine. However, the BMW 335i responds extremely well to upgrades and is a very capable car.

How Much Horsepower Does A 335i Have?

This information is a bit repetitive with the above 335i horsepower timeline. We’re simply adding it for an easy way for readers to search for power and torque by year.

In 2011, BMW replaced the N54 engine in the 335i with the newer N55 engine variant. It moved from a twin turbo design to a single twin-scroll turbo. Despite missing an entire turbocharger, the 2011 BMW 335i still makes 300 horsepower and torque.

This was also the first year for the BMW 335is with the older N54 engine variant. Thanks to a few small updates and higher boost the 335is delivers 320hp and 332 lb-ft.

BMW did make one considerable change to the 2014 335i. The N55 engine began using electronic waste-gate (EWG) control instead of the older pneumatic wastegate (PWG). EWG allows the 335i to make more power with aftermarket upgrades and tuning. However, the factory output for the 2014 335i remains at 300 horsepower and 300 lb-ft.

The final year of the BMW 335i didn’t see any major changes from the previous year. 2015 BMW 335i models deliver 300 horsepower and torque.