The appeal of an SUV is undeniable. They’re practical, capable, and, most of the time, safe. Those selling points are especially enticing if you have a family to chauffeur. The U.S. SUV craze is one that wreaked peak sales figures in the 1990s and mid-2000s and hasn’t really declined since then. SUVs are one of the highest-selling vehicle types on sale today.

Over the years, there have been some real winners and some real losers in the SUV space. There are some things that an SUV absolutely needs to do well in order for it to sell. In general, an SUV needs to be exceedingly spacious, capable in most conditions, safe for both the driver and passengers, and be an overall comfortable vehicle to drive.

Luckily, since the SUV formula has been around for quite a while now, there are quite a few solid secondhand options out there.

Best Used SUV for Under $10,000 Considerations

As is the same with purchasing any kind of secondhand vehicle, there are some considerations that you should take into account before pulling the trigger on a used SUV. At this point, most of the SUV options that fall around the $10,000 price point are typically aging and have some mileage on them. With that being said, that shouldn’t necessarily dissuade you from purchasing a used SUV. You’ll just need to know what to look out for when doing so.

In a lot of cases, cheap SUVs are sold without service records or maintenance history. Try your best to avoid these examples, unless you are mechanically savvy, as they might need costly repairs in the future. If the previous owner or dealer cannot provide any vehicle history, it might be worth doing some additional research by plugging the VIN into a service like Carfax to ensure that the vehicle hasn’t been in any serious collisions or has outstanding damage.

In addition to being relatively cheap to purchase, most of the cars on this list have low associated maintenance and parts costs as well. It isn’t the end of the world if the car has minor cosmetic, mechanical, or performance issues, but it factors into your buying decision.

Since we are focusing specifically on a reasonably low price point as far as used cars are concerned, most of the cars on this list are past their teenage years. While it is generally preferable to find the newest example of a particular model at your price point, old doesn’t necessarily mean bad. It just means that you’ll likely have to perform more minor fixes than on a newer model.

In this guide, we specifically picked SUVs that have a lot of staying power. That is to say that most of the cars listed below are very mechanically solid and can run for hundreds of thousands of miles if properly cared for. Most of the listed cars will fall apart around their powertrain before you start to encounter any truly severe engine problems. With that being said, purchasing an aging car usually also equates to purchasing interior components, repairing creature comforts like heat and A/C, and other odds and ends.

At the end of the day, it’s much better to have a vehicle that will run and drive without fail than a pretty car that leaves you stranded.

Performance is the third end of the car buying trifecta, with the other two being cost and reliability. As such, it is rare to find a car that hits on all three. In the context of SUV buying, performance is less of a speed and agility metric and more of a “will it do the job I need it to do” type of metric. For instance, you probably aren’t looking to win any drag races, but you might need an SUV that can tow a trailer from time to time or tackle a dirt road without causing spinal damage. When buying a car in this price range, it is vital to consider the setting that you’ll most commonly be using the car.

Other everyday considerations play into performance as well. For example, if you commute a good distance to work on the highway every day, gas mileage and ride comfort should be high on the performance checklist. Do you like taking camping trips to hard-to-reach places? In that case, durability and 4WD should trump everything else. We’ll suggest a little of everything as far as performance is concerned in this list. 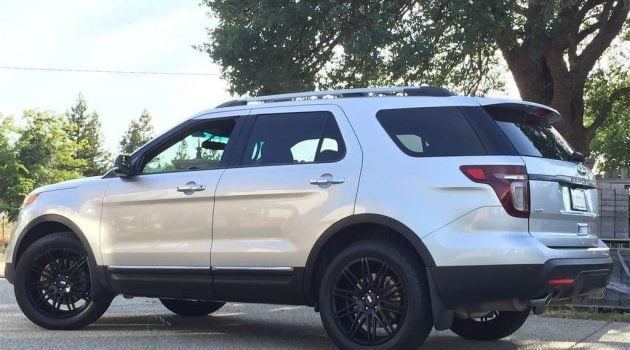 The Ford Explorer has been a go-to American SUV for decades at this point. There are some compelling arguments in favor of owning one. A 2011 Explorer is the most likely model year to find below the $10,000 price point, which has the 5th Gen’s first year on the road. At first, the 5th Gen was only available with the 3.5L twin-turbocharged Cyclone V6 which is an impressive engine in its own right. The 3.5L Cyclone is a somewhat zippy engine known for its reliability and efficiency. 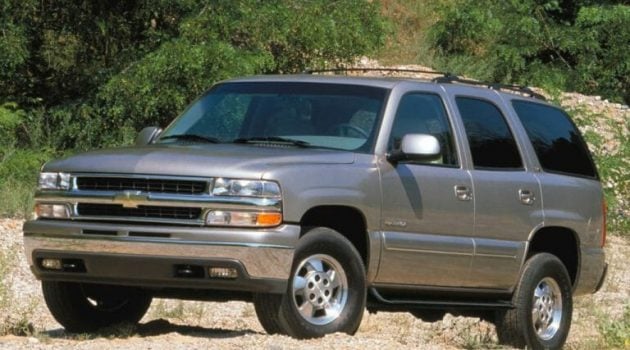 The Chevy Tahoe is an SUV that needs no introduction. It has essentially defined the full-size SUV platform since its release in 1992. Everything that the first generation Tahoe did well, the second generation does better. While the second-generation Tahoe certainly isn’t the most modern option on this list, it certainly earned its spot for its reliability, practicality, and comfort. If you are looking for a second-gen with additional modern accouterments, look for a 2003+ model, as they come with enhanced safety, entertainment, and quality of life features that the 200-2003 models lack.

Having owned a 2003 Tahoe, I can attest to their overall tank-ishness. Both the 4.8L and 5.3L V8s that came in the second-gen Tahoe are bulletproof and cost very little to maintain. Even if something were to happen, GM parts and repairs are generally inexpensive and easy. With all-wheel-drive selected, there’s hardly a place that a second-gen Tahoe can’t go.

The second-gen Tahoe’s comfort level is hard to beat. Honestly. The front seats feel more like a used sofa with a bit more support. Where many cheap V8 cars lack in the comfort department, Tahoes do not. In combination with the planted but forgiving suspension, it can feel like you are stationary at 80 mph a lot of the time. It is hard to imagine a better long-haul vehicle than a Tahoe.

With that being said, if long commutes are a part of your every day, a Tahoe might not be the best choice for your wallet in the long run. Due to the nature of Chevy’s V8s, fuel efficiency was never a top priority for the Tahoe. 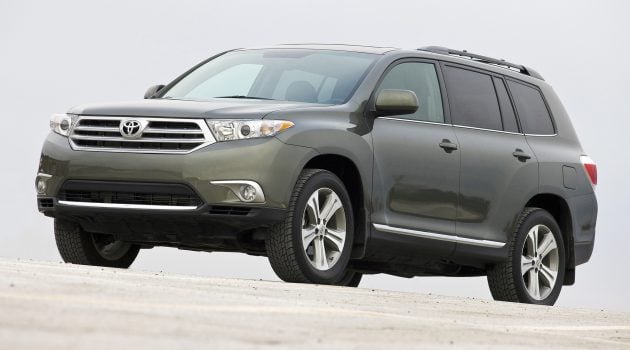 While it might not be the most exciting SUV on our list, the second-generation Toyota Highlander is certainly an option that won’t let you down very often. Toyota has a bit of a reputation for reliability and that certainly extends to the Highlander. We would recommend choosing a non-hybrid Highlander, simply due to the fact that both the 1AR-FE and 2GR-FE are known to be highly reliable and capable engines, prone to fewer failures than the hybrid V6 options. With that being said, a Highlander is a safe choice regardless of the engine.

Typically, Toyota isn’t known for luxury but that isn’t necessarily the case with the Highlander. The second-gen features quality leatherette-bolstered seats and wood console trim that makes the interior a comfortable place to be. Some higher-trim V6 models came with third-row seats as an option, but they are truly only suited for children. Overall, there is quite a bit of interior space available, with cargo storage capacity expanding to 80.6 cubic feet with the rear seats folded down. 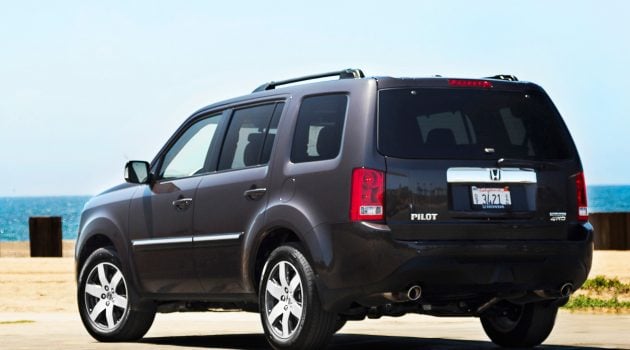 In terms of overall build, the second-generation Honda Pilot is pretty comparable to the second-generation Toyota Highlander listed above. They were direct market competitors at the time, so that makes sense. What really makes the Pilot a surprising standout option is its 3.5L V6 powerhouse that puts out a whopping 250 horsepower and 253 lb-ft of torque. Since all Pilots are equipped with the V6, you know exactly what you’re getting in terms of performance.

The second-generation Pilot comes in four distinct trim levels, including the LX, EX, EX-L, and Touring. The LX is the base model, with more standard features being added as you move up the hierarchy. If you are looking for the most modern amenities, the Touring trim is your best bet. The Touring trim Pilot comes with a power liftgate, an upgraded sound system with USB audio interface, Bluetooth wireless connectivity and a voice-activated navigation system. 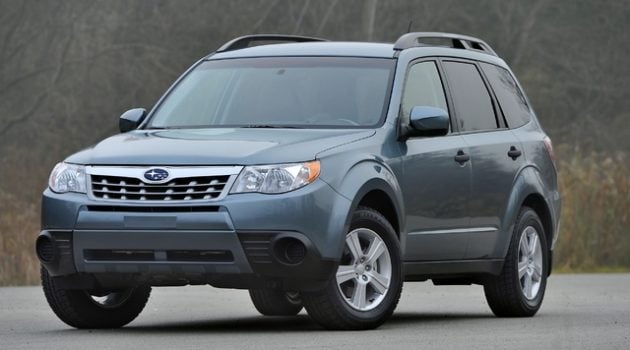 This one is an entry that narrowly makes it onto the list. While the Forester can still technically be called an SUV, it is significantly smaller than most of the others. Previous to the third generation, the Forester took the form of a hatchback based on the Subaru Impreza chassis. For the third-gen, Subaru engineers took the basic body structure of the Japanese-spec Impreza wagon and combined it with the rear platform of the U.S.-spec Impreza sedan. The result is an all-wheel-drive midsized SUV that handles quite well.

If there is one thing that Subaru is known for, it’s their love of an all-wheel-drive layout. Ever since the Subaru Leone was released in 1972, all-wheel-drive has been a staple addition to nearly every single vehicle that they produce. That includes the Forester. That makes the Forrester extremely capable in poor weather conditions and uneven terrain. The third generation Forrester also has reworked independent double-wishbone suspension, which improves its handling characteristics and provides a smoother ride. To improve all-terrain performance even more, the Forester has an impressive 8.7 inches of ground clearance.

While a Forester might not be the most luxurious choice, it certainly supplies a fair amount of features including steering-wheel audio controls, Bluetooth-enabled navigation radio, and a premium sound system. Later 2011+ models came with a rear backup camera, Tom-Tom navigation, and, on Touring trims, HID headlights.

While it is difficult to find many modern options as far as $10,000 SUVs are concerned, there are quite a few dependable and practical previous-generation options out there. Of course, your SUV needs can vary dramatically from someone else’s needs. For that reason, it is important to know what you need from an SUV before making a purchase.

If comfort and power are central to your list of SUV needs, a fifth-generation Ford Explorer or second-gen Tahoe are your best bet. While the Explorer unquestionably outranks the Tahoe in terms of modern amenities and features, the Tahoe is a tried and true workhorse that will get you wherever you need to go comfortably and reliably. Towing it truly unmatched by the Tahoe at this pricepoint.

If efficiency and performance are at the forefront of your needs, a Toyota Highlander, Honda Pilot, or Subaru Forester might fit the bill a bit better. All three are known for their high mileage per gallon, ample storage room, and overall reliability. If you are looking for an SUV with a decent towing capacity, Highlander and Pilot all-wheel-drive V6 models are the way to go. While the Subaru Forester might not be the most spacious of the bunch, it is the best to drive.