Some may not like the direction Ford went with using the EcoBoost engine in the Raptor. However, the 3.5L twin turbo V6 engine delivers great performance. It also makes the Raptor easy to upgrade for massive power gains. A cold air intake is among the best mods for the Raptor 3.5 EcoBoost. In this guide, we discuss Ford Raptor intake upgrades along with price, benefits, power gains, and more. 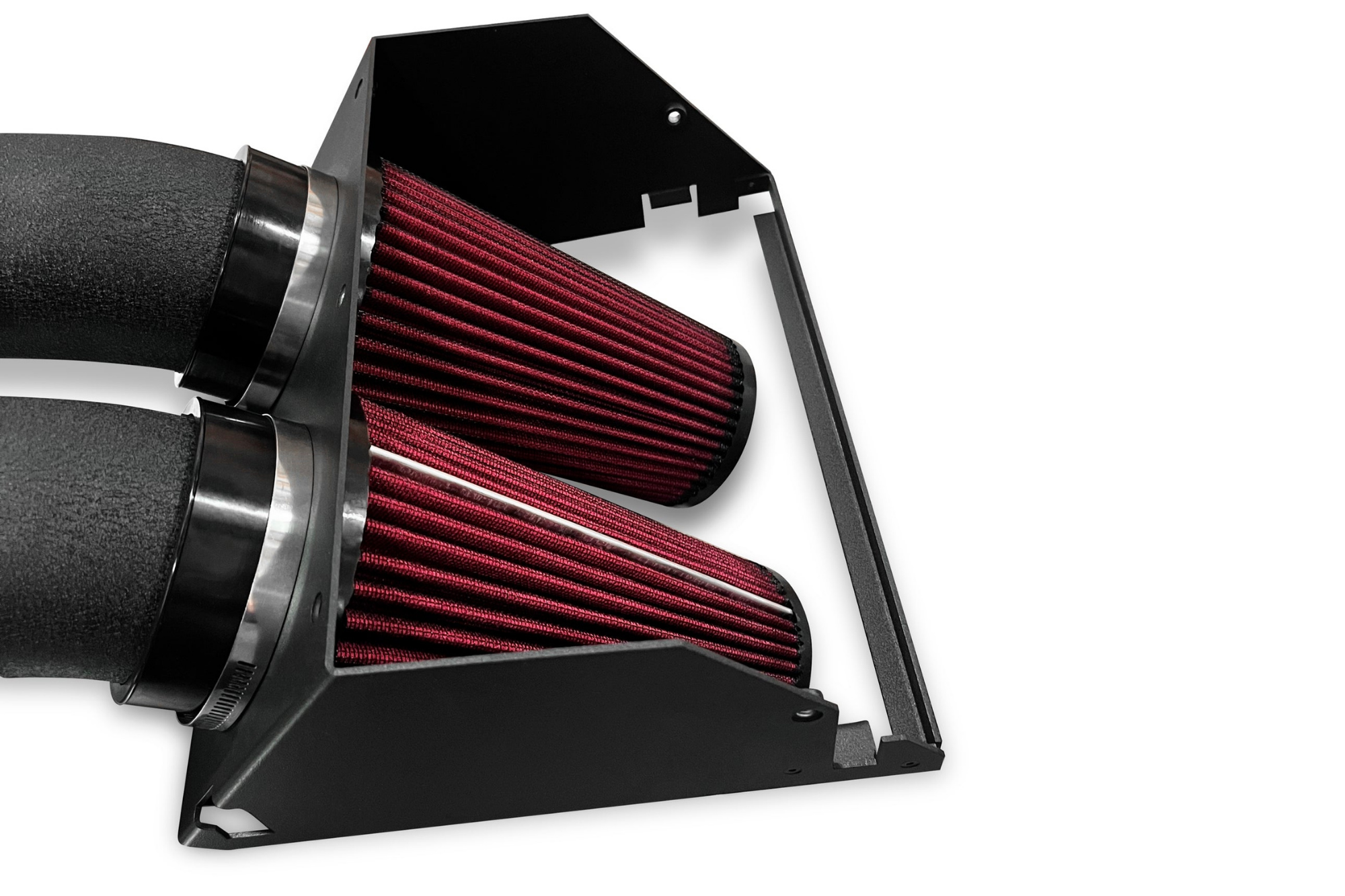 It’s important to look at intake designs before jumping into the benefits, price, and best Ford Raptor intakes. If you’re familiar with intake mods you likely understand there are a number of options. There are also a lot of different terms. Cold air intakes, ram intake, performance intake, and intake system are just a few of many names.

What’s the difference between all of these, though? Is one intake upgrade better than another? How does this all apply to Raptor 3.5 EcoBoost intake upgrades?

However, most intake systems are not true cold air intakes. Aftermarket systems often use the same filter and piping locations. Instead, CAI has become a more generic way to refer to any performance intake.

Many intakes for the Raptor 3.5 EcoBoost are short ram systems. It’s a common term and generally accepted. True ram intakes vary from most standard aftermarket intake upgrades. That could be an entire article of its own, though.

Ultimately, cold air intakes and ram intakes aren’t hugely important factors on the 3.5 EcoBoost F-150 Raptor. Often, they’re not true to the design and instead are nomenclatures to describe an aftermarket intake.

With the typical CAI and short ram terms out of the way let’s move onto the important topic. Open vs closed intakes are the way we prefer to think of intakes on turbo engines. This is rather simple. An open intake leaves the filter open to the engine bay (or wherever the filter is mounted). Closed intakes use an air-box to shield the filter.

Open intakes may be referred to as hot air intakes. Leaving the filter open to the engine bay does allow hotter air into the intake at a stop and very low speeds. However, once you get up to speed the air in the engine bay is refreshed quickly via the radiator and oncoming air thru the grille.

So, the air isn’t that much hotter even with an open intake. The difference is too minimal to have any effect on the intercoolers ability to cool the air to a given temperature.

Testing shows open intakes are superior designs on forced induction engines. Removing the airbox allows for maximum airflow through the filters. It also frees up turbo and induction sounds on the Ford Raptor. Closed intakes still deliver good benefits and power gains on the 3.5 EcoBoost Raptor. However, an open intake design will likely provide the best airflow, sounds, and power gains.

Finally! It’s time to move onto the more exciting topics in this article. Let’s take a quick look at Ford Raptor performance intake benefits and then move onto some of the best upgrades around. Benefits of Raptor 3.5 EcoBoost intake upgrades include:

Exact Ford Raptor HP gains with an intake depend on many different factors. Intakes primarily add power by increasing airflow. On a bone stock Raptor 3.5L V6 the stock intake is pretty efficient. As such, intake power gains will likely be minimal to non-existent.

Adding power and boost increases airflow demands, which can quickly overwhelm the stock intake. This is where the bulk of the horsepower gains come from. With a tune and basic bolt-ons a Raptor intake should add about 5-10whp. Start adding bigger mods like turbo upgrades and an intake system can add 15+hp.

Tons of intake upgrades for the F-150 Raptor already exist and more are sure to pop up as the platform grows. There are a lot of good options and we don’t have time to list them all. Instead, in the next sections, we’ll look at a few of our favorite Raptor 3.5 EcoBoost intakes on the market. We believe these intake upgrades offer the best balance of price, performance, and quality. That said, let’s jump right in and look at some of the best Ford Raptor intake mods.

CV Fab is a newer brand when it comes to Ford Raptor upgrades. However, we find it hard to recommend many EcoBoost mods above CVF. They offer an exceptional balance of price, performance, and quality. The same applies for the CVF Raptor 3.5 EcoBoost dual cone intake system.

As the product name suggests, the CVF dual cone intake features dual cone filters for maximum airflow and performance. It manages to outflow the factory intake by a massive 65%! It’s an open intake design but it does include a heat shield as well as an optional top if the warmer intake temps concern you.

Ultimately, the CVF Ford Raptor intake is an awesome choice from top to bottom. It comes in at $350 which is a great price for a dual cone intake system. Couple that with great quality and plenty of airflow and it’s really hard to go wrong with this option.

COBB is a huge brand in the automotive market space. They’re well know them for there quality tunes and many other aftermarket upgrades. The COBB Raptor cold air intake is a popular upgrade for the 3.5L V6 twin turbo engine. This is a closed intake system that features a dual inlets with a single filter that’s 165% larger than OEM.

As with the CVF intake above, COBB uses mandrel bent tubing and quality 304 stainless steel clamps and brackets. The quality is definitely there with the COBB intake system. However, you’ll pay a bit of a premium for the brand name and image. It comes in at $425 which is still a very fair price for a quality intake that delivers good performance.

aFe is another big name when it comes to aftermarket upgrades, especially intake kits. The Ford Raptor aFe dual cone intake is much the same as the CVF option. It uses true dual cone filters and also features a heat shield around the filters. The 3″ aluminum intake piping is shared with the CVF design too.

Basically, the aFe power is very similar to the CVF dual cone intakes. The main difference is that the aFe system will set you back about $500. We believe it goes to show how well-priced the Raptor intake upgrade is from CVF. Anyway, this is still a good option for those who want a dual cone intake.

The Ford Raptor with the 3.5 EcoBoost twin turbo engine is a great platform to mod for endless power. Among the best Raptor upgrades include a simple intake system. Raptor intakes can offer gains of 5-15whp depending on other mods on the 3.5L V6 engine. They also offer some awesome sounds, better throttle response, and a clean engine bay.

Given the mod-friendly nature of this engine there are plenty of intake upgrades available. We believe the CVF Raptor dual cone intake offers the best all-around balance of price, quality, and performance. aFe also offers a great dual cone system but it comes in quite a bit more expensive. Otherwise, COBB is a well-known brand that delivers great products. Regardless of your specific choice, a Ford Raptor intake upgrade is sure to help take the 3.5 twin turbo engine to the next level.

What’s your experience with Raptor intakes? Are you considering one?