A 2.3L 4-banger engine in a truck might not sound like a lot of power or performance. While the Ranger produces 270hp and 310lb-ft. of torque from the factory, the turbocharged 2.3L EcoBoost engine can produce a lot more power with some simple bolt-on modifications.

While most Ford Ranger performance upgrade guides focus on lift kits, tires, winches, and other accessory type products, this guide is focused on power-adding upgrades. Since the Ranger is turbocharged, it’s really easy and cheap to squeeze some solid power gains out of this truck. The 2.3 EcoBoost produces 345hp from the factory for certain Ford vehicles which insinuates that the Ranger is simply de-tuned and has a lot of power potential on the table.

This guide is going to cover the 5 best power-adding performance upgrades for the 2.3L Ford Ranger. We are going to focus on the best bolt-on modifications that can take your Ranger beyond 350whp and 400lb-ft. of torque. 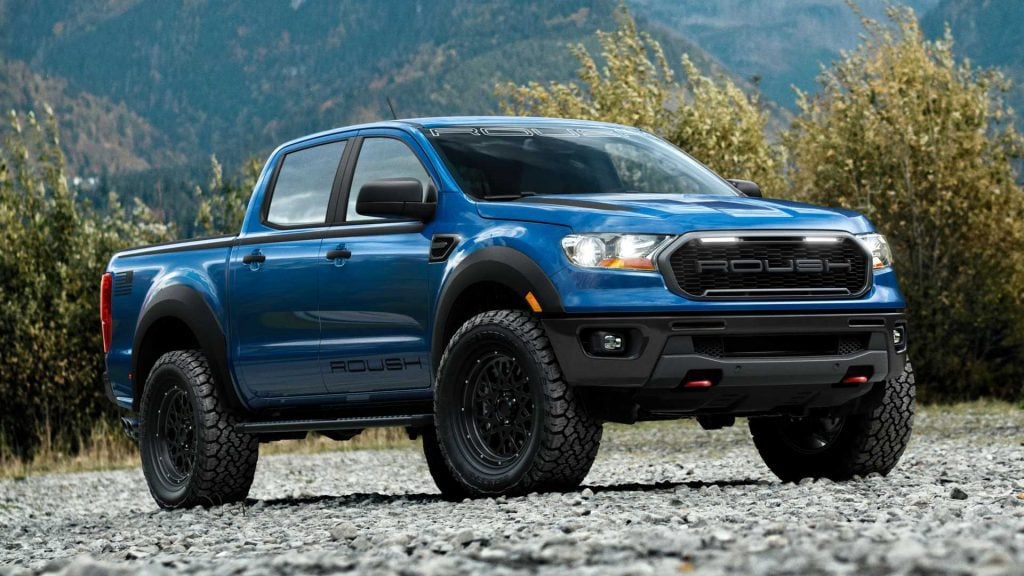 The Ranger is a bit underquoted from the factory. Most stock 2.3 Rangers will dyno right around the 265-270whp and 300-310lb-ft. of torque. However, what’s more important is, how much power can the Ranger reliably handle?

The 2.3L EcoBoost can generally handle about 420-450wtq before we would start recommending internal upgrades. The mods we list here should keep you safely within these power limits. However, with that being said, adding power always increases the likelihood of problems. The safer you are with your tuning, the better off you’ll be.

We don’t have any turbo upgrades included in our list since this will push the 2.3 EcoBoost beyond its power limits and therefore require some more significant mods.

If you are going to make one mod to your Ranger, a tune would be our top recommendation. Tunes offer the best bang-for-the-buck and can add up to 50whp and 70wtq on an otherwise completely stock Ranger. With prices for tuners coming in around $500, you can’t beat the price per horsepower you get out of a tuner.

Another benefit of tuners is that they properly adjust your engine to account for other mods you are running. By doing so they help maximize the power gains you get from the subsequent mods and help your engine run properly with mods.

Burger Motorsports makes an awesome plug-and-play piggyback tuner for the EcoBoost Ranger. Dyno charts show gains of up to 50whp and 70wtq on a completely stock Ranger which is impressive. The device comes with 8 pre-loaded maps for various power levels and fuel types, including being full E85 compatible.

Through an app and bluetooth connection it also offers the ability to set boost by gear. Additionally, you can monitor over 40 signals such as timing, AFRs, throttle position, and more. It also allows for easy data logging, code reading and resetting, and so on. Overall, Burger Motorsports is one of our favorite piggyback tuner manufacturers. We actually run their JB4 on multiple BMW’s that we own as well.

Our second favorite Ford Ranger performance upgrade is a cold air intake system. Tuners predominantly increase power by increasing the boost level, or psi, of the turbocharger. Bringing more air to the turbocharger is important as it reduces the amount of effort and stress put on the turbo as it compresses air down further.

While an intake will provide some solid power gains, it will also help improve the efficiency of the turbocharger which is good for the health and reliability of the turbo. The stock turbo on the 2.3 EcoBoost is actually pretty small, inefficient, and weak. So helping it out with some extra air flow is highly recommended.

The two different styles of intake systems are open and closed. Open intakes have the filter directly exposed to the engine bay. On the other hand, closed intakes usually have the filter concealed within a box.

Open intakes outflow closed intakes since they aren’t constrained by the enclosed box. They do however draw in air that is slightly hotter since they are exposed to hot engine air. However, this point is pretty much irrelevant due to intercoolers. The air entering the intake gets heated up a lot by the turbo anyways, and then is cooled by the intercooler. So the hotter temps don’t really matter. One other factor for consideration is open intakes are a bit louder and give more of a “whoosh” noise under acceleration.

We like open intakes since they offer better air flow. However, unless you are upgrading your turbo then any aftermarket intake system will be a big upgrade over the stock one.

Downpipes are another favorite Ranger mod since they offer the second best power gains behind a tuner. Some of the benefits of upgrading the downpipe include:

A downpipe is the first part of the exhaust system and bolts up directly to the turbocharger. It also houses the catalytic converter which makes it highly restrictive. Since it sits right on the turbo, it creates a lot of backpressure which has a negative impact on the turbo. Additionally, once you have a tune and an intake bringing more air into the engine, it’s important to increase the flow out of the engine.

Power gains come from the reduction in backpressure which actually allows the turbo to run a few psi more. The less pressure in the exhaust the more freely and quickly the turbo can spool, therefore increase the amount of boost it can run.

The most restrictive part of the downpipe is the catalytic converter located inside of it. Therefore, the best way to reduce backpressure and performance is to remove the catalytic converter, or go catless. However, the downside to this method is that it is illegal and will cause your Ranger to fail emissions.

Therefore, the alternative option is to run a high-flow downpipe. High-flow options use a catalytic converter, which keeps your car legal, but opt for a cat that is less restrictive than the OEM one.

If you want to dig deeper here, we have a more comprehensive Ranger Downpipe Upgrade Guide.

CVF offers one of the most affordable, best bang-for-the-buck downpipes on the market. They used to offer a catless option as well but due to EPA crackdowns, you can only find a high-flow option available nowadays. This is our favorite option on the market when you consider the combination of performance, value, and quality.

The downpipe is a 3″ 304 stainless steel piping with a 400-cell catalytic converter. They also offer a lifetime warranty which is pretty rare for downpipes since the cats can burn out over time.

The last upgrade, but possibly one of the best, on our list is an upgraded front mount intercooler. The factory intercooler is small and while sufficient for stock boost levels, it quickly becomes overwhelmed when boost is increased. This can result in heat soak which can actually cause you to lose horsepower. When this happens, the air from the turbo gets so hot that the intercooler isn’t actually able to effectively cool the air before it enters the combustion chamber.

The solution here is to upgrade to a larger intercooler. This will allow for more consistent performance and increase power while also preventing any power loss incurred from heat soak. A larger intercooler means cooler air entering the engine which means more horsepower.

If you ever do back to back pulls in your Ranger, or like to drive aggressively, you’ve probably noticed power decreases after the first few pulls. This is because of heat soak. When the air entering the intercooler gets too hot, it can’t effectively cool it.

The solution here is to get a bigger intercooler with more cooling capacity. The two factors that affect cooling are the core size and the amount of surface area of the intercooler.

Intercoolers are a more expensive upgrade, but they are one of the best reliability mods for upgraded Rangers. Cooler air means less chance of knock, better timing, lower EGTs, and more consistent performance which results in an overall healthier engine. Heat is the killer of engines and an intercooler is one of the best ways to keep engine temps down.

For a more detailed guide, check out our Ford Ranger Intercooler Upgrade Guide.

CVF offers the best bang on the market, and this is no different with their Ranger intercooler. This intercooler is a direct bolt-on replacement with a core size 46% larger than the stock intercooler. It also utilizes high-flow end tanks to improve air flow in and out of the intercooler. Additionally, it offers more surface area which increases cooling efficiency, resulting in lower IATs.

The Ford Ranger is a bit underpowered and underrated from the factory. At just 270hp and 310tq, the power levels come in well below other 2.3 EcoBoost cars that produce up to 345hp. Fortunately, Ford also underrated this engine considering it dyno’s the same numbers to the wheels as it’s quoted power wise which is awesome. However, there is still a lot of power potential left on the table.

Four simple bolt-on performance upgrades can transform the 270whp and 310wtq Ford Ranger to a 350whp and 400wtq beast. A tuner is our favorite mod since it offers the biggest power gains and is the most affordable with respect to price per horsepower. We always recommend an upgraded intake with a tune. And with an upgraded intake and tune we recommend adding a high-flow downpipe to improve turbo efficiency and reduce backpressure. Lastly, an intercooler is one of the best performance mods and reliability mods for a tuned Ranger.

While all of these mods might sound expensive, they come in at just about $2,000 which is really a steal of a deal for 80whp+ and 90wtq+. You won’t see power gains anywhere near this from a naturally-aspirated engine with that amount of money in mods.

What mods are you running or considering in your Ranger EcoBoost?