Fuel is pumped out of the ground, transported to refineries, and then transported to gas stations where it sits in big underground holding tanks. And it then flows through the pump into your gas tank. Along the way fuel, especially diesel fuel, can pick up various particulates such as dirt and grime. These particulates can harm your engine and fueling system.

What is a Fuel Filter?

A fuel filter blocks dirt, rust, grime, and other harmful particulates from entering your engine through your fuel system.

Fuel filters are usually cylindrical cartridges with filter paper on the inside, similar to an air filter or an oil filter. The fuel flows through the filter prior to being sent to the injectors to prevent any harmful debris from passing into the injectors or engine. 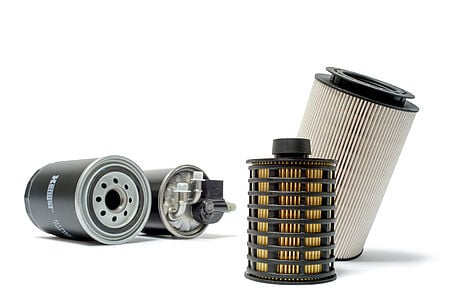 How often should I replace my fuel filter?

Fuel filter change intervals vary depending on your engine but usually fall within the 20,000-50,000 mile range for older gasoline engines and 60,000-90,000 miles for newer engines. We recommend changing fuel filters every 30,000-60,000 miles for gasoline engines, depending on your recommended service intervals. Some manufacturers likely Toyota claim the filter never needs to be replaced. The best bet is to follow your cars recommended service intervals.

Whether your manufacturer says the filter never needs to be replaced or not, it is still a good maintenance item once your car gets up into high mileage levels.

Diesel engines on the other hand require more frequent fuel filter replacements. Gasoline is more refined than diesel fuel is which means that diesel tends to naturally be dirtier. Additionally, diesel fuel is more susceptible to picking up dirt, rust, debris, etc. than normal gasoline.

Fuel filters don’t fail immediately. They tend to slowly become clogged over time. With that being said, these symptoms will usually develop slightly and then gradually get worse over time.

When a fuel filter is clogged it restricts fuel flow to the cylinders. This is commonly called running “lean”. Running lean can starve the cylinders of fuel which causes increased friction amongst the internals which can lead to serious internal engine damage.

The most common initial symptoms are rough idling and misfires. From there it will progressively get worse and lead to hard starts, stalling, and significant performance decreases.

What happens when a fuel filter fails?

Outside of the symptoms listed above, a bad fuel filter can also cause your fuel pump and fuel injectors to fail.

When a filter clogs, less fuel is sent to the injectors and into the cylinders. When this happens, the fuel pump tries to fix the issue by increasing fuel flow. This causes the fuel pump to overwork itself which can lead to complete pump failure.

Additionally, the decreased fuel flow leads to lower fuel pressure as the fuel exits the injectors. This results in the fuel injectors also becoming overworked which can cause them to fail as well. If your fuel filter is bad for a long time it is possible for it to deteriorate to the point that debris makes it past the filter. When this happens it will make its way directly to the injectors and likely lead to the injectors failing. It can also send this debris into the cylinder chamber and cause engine damage.

What causes a bad fuel filter?

Fuel filters go bad because they become clogged. With that being said, the biggest cause of clogged fuel filters is bad gasoline. The longer gasoline sits within holding tanks, your gas tank, etc. the more dirt and grime it picks up. Additionally, on older engines especially the fuel tank and various parts of the fuel system can corrode on the inside causing a buildup of debris in the gas tank.

The other best “prevention” method is to change you fuel filter at the recommended intervals. It’s not uncommon to see people running fuel filters past the 100,000 mile mark since they simply aren’t aware they should be changed. No matter how much you do to try to prevent clogging a fuel filter, it will pick up dirt and grime overtime. So even if you don’t have any noticeable symptoms replacing the fuel filter is still a smart maintenance item and will likely wake your engine up a bit if your filter is old.

Fuel filters themselves are usually somewhere in the range of $20-$50. The most variable part is labor which is most dependent upon where your fuel filter is located. Some are located in easy to access parts of the engine bay while others sit underneath the vehicle or in more difficult areas of the engine bay.

Diesel fuel filter replacement tends to cost $50-$150 for parts and labor. Due to the frequency of replacing the filter on diesels they tend to be located in easier to access areas and are therefore relatively easy DIY replacements.