The A90 Supra is the most recent iteration of one of Toyota’s most famous performance models. The Supra is a JDM legend for many reasons, and the Mark V is shaping up to slot right in. While the A90 is quite different than the Supras of the past, it is still a turbocharged 6-cylinder beast that is just begging to be modified.

In this article, we’ll discuss the performance benefits of upgrading your A90 Supra’s intakes and suggest some of the best A90 Supra intakes on the market currently. 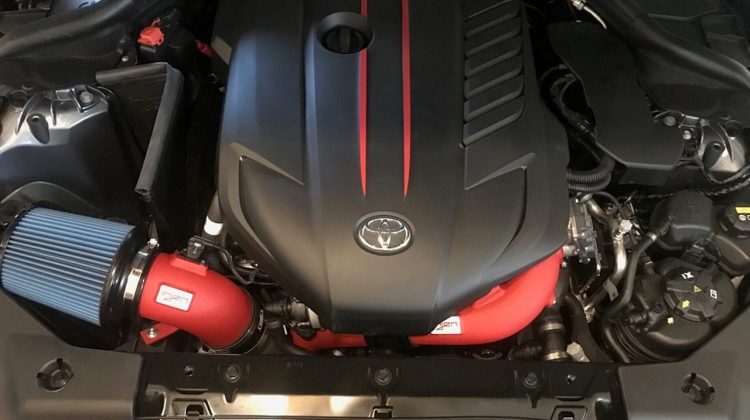 Most people are right in saying that most of the performance intakes available for the A90 Supra aren’t true cold air intakes. For an upgraded Supra intake to be considered a true “cold air” system, the filter would have to be re-routed to the bottom of the engine bay and away from the heat generated by the engine. There aren’t any true cold air intakes currently available for the A90 that fit that parameter. However, air temperature isn’t the only performance-boosting factor. Aftermarket intakes often increase the amount of air entering the engine by a significant degree. That is especially important for a turbocharged engine, like the B58.

Arguments for an A90 Toyota Supra Intake Upgrade

Building on the previous statement, it is important to remember that performance intakes affect turbocharged engines differently than naturally aspirated ones. When more air is sucked into a less restrictive intake, air pressure increases. That means the turbo doesn’t have to work as hard to compress incoming air. The end result is a more efficient turbocharger that can pump compressed air into the engine more quickly, creating more power.

If you are going to add a tune to your B58 and increase the turbo boost pressure (psi), then a high-flow intake is even more important. Tuning the engine and running higher boost requires more air to be drawn into the engine. Without more air flowing in, at high boost levels, your turbo will struggle to compensate and be forced to work overtime to compress enough air.

Benefits of an A90 Supra Intake Upgrade

Outside of the performance benefits, a lot of people upgrade their intake for the added noise they create. Induction noise is a hard one to explain if you’ve never heard it before. In essence, it is easier to hear the suction of air into a better flowing intake which truly is a sound to behold. While the performance benefits of an A90 Toyota Supra intake upgrade are debatable, the better sound is not.

In addition to marginally increasing horsepower and torque, there is the potential that an A90 Toyota Supra intake upgrade will slightly improve throttle response and turbo spool time. Depending on the construction of the upgraded intake, the inertia and flow characteristics of the incoming air can change the engine performance. While an upgraded intake doesn’t inherently increase throttle response, it can be a consequence of the modified airflow characteristics.

The performance of an A90 Toyota Supra intake upgrade is also determined by the style of intake that you choose to run. Some aftermarket intakes have an enclosed box design which is similar to the OEM B58 intake style. Generally, closed box intakes are slightly more restrictive as they aren’t exposed directly to the atmosphere. Other open-air intakes remove the restrictive factory airbox design, which allows the intake to suck in more air at a higher rate.

Here is a list of the three best 3.0L Supra intakes, in our opinion.

HKS is one of the best-known names in the business as far as high-quality aftermarket parts for Japanese cars are concerned. In business for nearly 50 years, you won’t find a manufacturer with a better pedigree or standing in the community. They also sell performance intakes for hundreds of cars, so they know what they’re doing.

HKS’ DryCarbon A90 Supra Intake features an open-air design. While that occasionally means that the incoming air isn’t as cold as it should be, HKS has designed their way around that. The DryCarbon construction reduces the amount of heat transfer in comparison to the stock aluminum piping material. Additionally, the piping is designed in a way to dramatically reduce turbulence inside the intake.

While Injen isn’t as well known in the aftermarket community as HKS, their SP intake is a solid option. The SP has a more traditional construction than the HKS DryCarbon, which significantly lowers its price. Where the HKS intake is constructed from carbon, the Injen is constructed from aluminum. While its construction might not be as advanced from a material perspective, it has a distinct advantage over the stock intake shape. The SP has one of the widest diameter intake tubes on this list, improving airflow dramatically.

The primary benefit of the Injen A90 Supra performance exhaust is its unrestrictive design. The factory intake’s complex design throttles incoming air. The SP is much more direct and features fewer direction changes that decrease air velocity. Like the HKS, the Injen SP is an open-air intake. To compensate for the SPs exposure to the atmosphere, the fully serviceable Super-Nano-Web filter provides unparalleled filtration. Since the SP is an open-air intake, induction noise is louder than with other closed-air systems.

While performance figures can be hard to nail down for some intakes, the Injen has dyno figures. They claim that the SP boosts performance by 15 horsepower and 17lb-ft of torque. With that being said, they did not mention if that was on a modified or stock A90 Supra. True figures are likely slightly less than that on a stock engine.

Unlike the previous intakes, the aFe Momentum intake is a closed air intake, similar to the factory arrangement. In the case of the Momentum, that comes with a couple of benefits. While closed air setups can be restrictive, the aFe system utilizes the largest filter possible. The increased filter size raises the overall filter surface area dramatically, which allows more air to enter the system. The overall result is a system that flows 22% better than the factory intake.

The Momentum’s housing actually provides enhanced heat-shielding characteristics that the other two intakes on this list lack. aFe uses heat-resistant XLPE plastic to construct the housing, which helps with thermal dispersion. The Momentum intake also comes with an aluminum heat shield to further protect it from high engine temperatures. In terms of appearance, the aFe intake matches the A90 Supra’s black and red engine cover.

Overall, the aFe Momentum offers very solid performance at an affordable price point. According to aFe’s dyno figures, the Momentum boosts factory performance by 12 horsepower and 24 lb-ft of torque. It is unclear if these numbers were generated from a stock or modified A90 Supra, but it is probably safe to assume that the figures are a bit lower on a bone stock car.

Performance intake systems are among the most popular aftermarket upgrades for good reason. They offer a good balance of performance, sounds, and price. This is especially true on the 3.0L B58 engine where air flow is essential. Power gains can even be as high as 10-15whp peak on tuned and modded A90 Toyota Supras.

We prefer open-intake systems as they usually offer the best improvements in flow and sound. However, on a modest tune or upgrades open and closed systems will offer similar benefits.

HKS, aFe, and Injen are big brand names in the industry and it’s hard to go wrong with their products. Regardless of your specific choice – mod away and have fun! If you are interested in learning more about the B58 engine that powers the A90 Supra, check out our Ultimate B58 Engine Guide. As always, safe driving!