It is widely known that oil changes are one of the most important service items on a car. The same can be said for a Toyota 4Runner oil change. We’ll specifically target the 5th generation of 4Runner. However, this guide will still apply to most other generations of 4Runner as well, as the process is very similar, and the oil and filter suggestions still apply.

Changing your own oil is one of the easiest and most straightforward ways to save money on servicing your 4Runner. Typically, a certified Toyota service center would charge upwards of $150-$175 for standard service and oil change. By doing it yourself, you could cut that cost in half. It is important that if you opt to do the service yourself, you do it right. In this guide, we’ll cover the following:

At the end of this article, you’ll know everything that you need to know to perform an oil change on a 5th Gen 4Runner. If you follow this guide closely, you should be ready to go for around $75 and 30 minutes of your time.

Tools Needed for the Oil Change

Most 1GR-FE-equipped Toyotas, including the 5th Gen 4Runner, take 6.6 quarts of oil. That is equivalent to 6.25 liters of oil. It is important to be accurate when adding oil to your 4Runner. Using too much oil can result in engine problems down the line. The same can be said for not using enough oil.

Upon completing your oil change, it is important to check the engine oil level. Checking your 4Runner’s engine oil is as straightforward as it is for most other cars with a physical dipstick.

It is extremely important to measure your 4Runner’s oil on a flat surface with your engine off. It is best to measure your oil after the vehicle has been sitting for a while. This allows for the oil to collect in the oil pan.

If the oil does not reach the lowest dot, there might be an oil leak present or the engine might have burnt off excess oil. Either way, it is worth investigating further. Once you complete your oil change, the oil will fall closer to the top dot, meaning that the oil is at maximum capacity.

This is obviously the last step in the 5th Gen oil change procedure. Your 4Runner must have its engine off, but ignition and accessories on to do this. To reset your 4Runner’s oil service indicator, you’ll first need to turn your key as far as it will go without starting the vehicle.

Once the key is in “accessory position,” make sure that your odometer screen is displaying the “Trip A” reading. If it isn’t, cycle the screen to Trip A by pressing the knob to the right of the speedometer. Once the display is reading correctly, turn the key to the off position.

Next, hold the Trip Meter “RESET” button while simultaneously turning your key back to accessory mode (the furthest that it will go without starting the car).

You can then release the “RESET” button and turn the key to the off position. Turn the ignition back on to verify that the light was successfully reset.

As you could probably guess, it is best to use OEM Toyota-developed oil in your 4Runner. With that being said, there are a number of other quality options if OEM oil isn’t an option. Whether you choose to go the OEM route or go with another option, make sure that your oil of choice is fully synthetic and long-life certified. As long as those requisites are met, the oil should be fine.

In general, 0W-20 is the go-to oil weight for the 5th Generation 4Runner. In comparison to the recommended oil weight for a lot of other manufacturers, 0W-20 is a very thin viscosity. Because of that, a lot of 4Runner owners question if that truly is the best oil for their car. Despite it being a strange choice, all official Toyota guides and manuals for the 5th Gen confirm 0W-20 as the correct oil for almost any application.

Toyota claims that 0W-20 works well in almost any temperature range in the US. Some 4Runner owners that live in areas with extremely hot summers opt to use 10W-30. Both will work well, but it is best to stick with Toyota’s suggested oil.

Toyota-made oil filters are also your best bet. They are pretty easy to get your hands on as well. They even sell them on Amazon. In addition, you’ll also need new oil drain plug gaskets, which are also sold on Amazon.

As stated earlier, changing the oil on your 4Runner is a relatively simple task. The entire procedure takes roughly 30 minutes to complete, depending on your experience level. Here are the necessary steps required to perform a 5th Gen oil change:

Depending on the materials that you have at your disposal, this step can vary. If you have vehicle ramps, center both ramps under the front two tires of your 4Runner. Slowly apply gas until you reach the top of the ramp. Make sure that you apply the parking brake once the vehicle is stationary. This will ensure that the vehicle does not roll backward off of them.

If you have a jack and jack stands, use the front reinforced jack point to lift the car. The jack point is located directly in front of the stiffening plate on a perpendicular brace. The location of the central front jack point is illustrated in the figure below.

Once the vehicle is in the air, you can place jack stands under the front two jack points. These will be marked in the diagram below. While it is possible to use only the two front jack stands, it is not advised. It is a better idea to use the rear central jacking point (marked in the diagram below) to jack up the rear of the 4Runner and to put the other two jack stands under the rear jack points. This allows the vehicle to be level in the air, allowing all of the oil to drain. 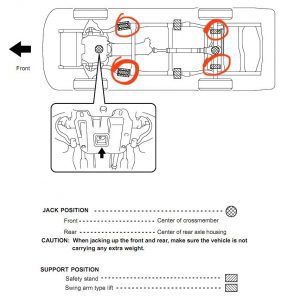 Once the 4Runner is in the air, you can begin the process of performing the oil change. The first step is to remove the front skid plate cover to gain access to the drain plug (shown below). You’ll need a 12mm socket and wrench to remove the two bolts at either end of the panel.

Once you remove the two bolts, the cover should lift down. Set the plate cover and bolts to the side in a location where you won’t lose the bolts.

The next step is draining the engine oil. Before doing that, you’ll need to place your used oil receptacle under your Runner. Remember, the oil is pressurized before the drain plug is unscrewed. That means that the used oil will stream out fairly forcefully, so place the receptacle in a position to compensate for that.

After the catch container is in place, you can unscrew the oil drain plug. It is located within a cut-out portion, exposed when you removed the skid plate cover (picture provided below). Use a socket wrench with a 14mm 6-point socket to turn the drain plug counter-clockwise. Make sure that the drain plug doesn’t fall into the dirty oil as it drains. 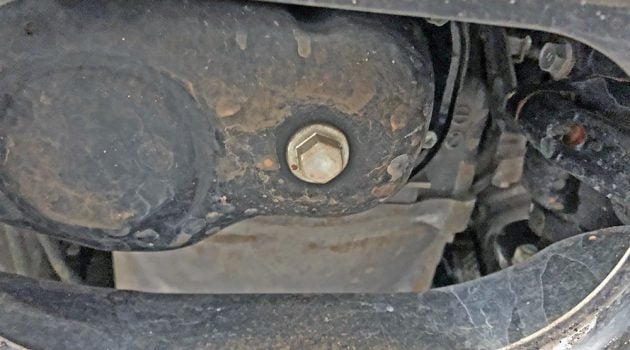 The oil drain process typically takes around 5 minutes to complete. Don’t get impatient with the process. Wait until the oil is infrequently dripping from the drain before continuing.

When unbolting the skid plate, move front to back. You’ll have to hold the plate up while you unscrew the back bolts, but it’s better than being hit in the face. Once the bolts are out, lift the skidplate out and over the hooks holding it on near the front. Keep the bolts in an easy-to-find position.

With the drain plug reinstalled, you can then remove the oil filter. The 5th Gen’s oil filter replacement procedure is a bit more complicated than most, but it’s still pretty easy. Oil might be caught in the oil filter housing, so make sure to bring the oil catch container back into play.

There is a metal oil filter plug that needs to be removed first. Use a ratchet with a 3/8” drive to unscrew the plug and let it drain for a minute.

Your new oil filter kit will come with a small plastic oil drain tool to extract the remaining oil from the filter. Simply push the plastic part into the base of the oil filter in the housing and wait for the oil to drain completely. The plastic part and the existing O-ring can then be disposed of.

There is also a sealing O-ring located near the bottom of the housing that must be replaced as well. While a flathead screwdriver or removal tool might be helpful, you should be able to remove it by hand.

Once you have removed the oil filter gasket, you’ll know where their new replacement goes. The required gaskets will almost certainly be provided with the new oil filter. Lubricate the new gasket with a small amount of oil before installing it. It is easiest to roll it into its correct position.

The entire assembly can then be put back into the oil filter housing at the front part of the engine where it was removed from. Screw the oil filter assembly until the metal tab on the side aligns with the mark on the housing.

Following these steps, you can reinstall the metal drain plug, once again using the 3/8” extension and associated wrench. Torque the plug to 30lb-ft or until it is nice and snug.

The last step in the 4Runner oil change process is adding the oil itself. As stated above, the 5th Gen takes 6.6 quarts, or 6.25 liters of oil to reach max oil capacity. The best way to fill your Runner’s engine oil is with a funnel. It is a good idea to use one to prevent any spillage on surrounding engine components. If you do spill some, wipe the spill clean to prevent smoke from the oil burning off.

There are markings on the side of each oil container that let you know how much oil you have already poured. Simply pour the majority of the oil into the oil fill port, stopping at 6.6 quarts. Screw the oil cap back on.

That’s it! Following completion, make sure to follow the instructions listed above to check the oil level with your dipstick. The oil level should fall close to the max level oil line. Check for leaks in the following hours to make sure that everything was done properly. That’s it for a DIY Toyota 4Runner oil change!