After nearly a two decade hiatus, the Mercedes-AMG C43 4MATIC (W205) made its triumphant return to the Mercedes-Benz lineup in the 2016 model year. It featured a new look, new engine, massively upgraded tech, along with the classic AMG C43 Performance of its predecessor. It quickly earned rave reviews from critics and enthusiasts, who praised it as refined but very enjoyable.

Still, the AMG C43 feels a little underpowered from the factory, and the DE 30 LA is just begging for more horsepower to be unleashed. This guide will cover the top performance upgrades for the 2016-2021 Mercedes-AMG C43. We are going to focus on engine mods that will add both performance and reliability to the DE 30. The engine is capable of producing a ton of power, and we’ll show you how to unlock it. Let’s look at the 5 best AMG C43 performance upgrades. 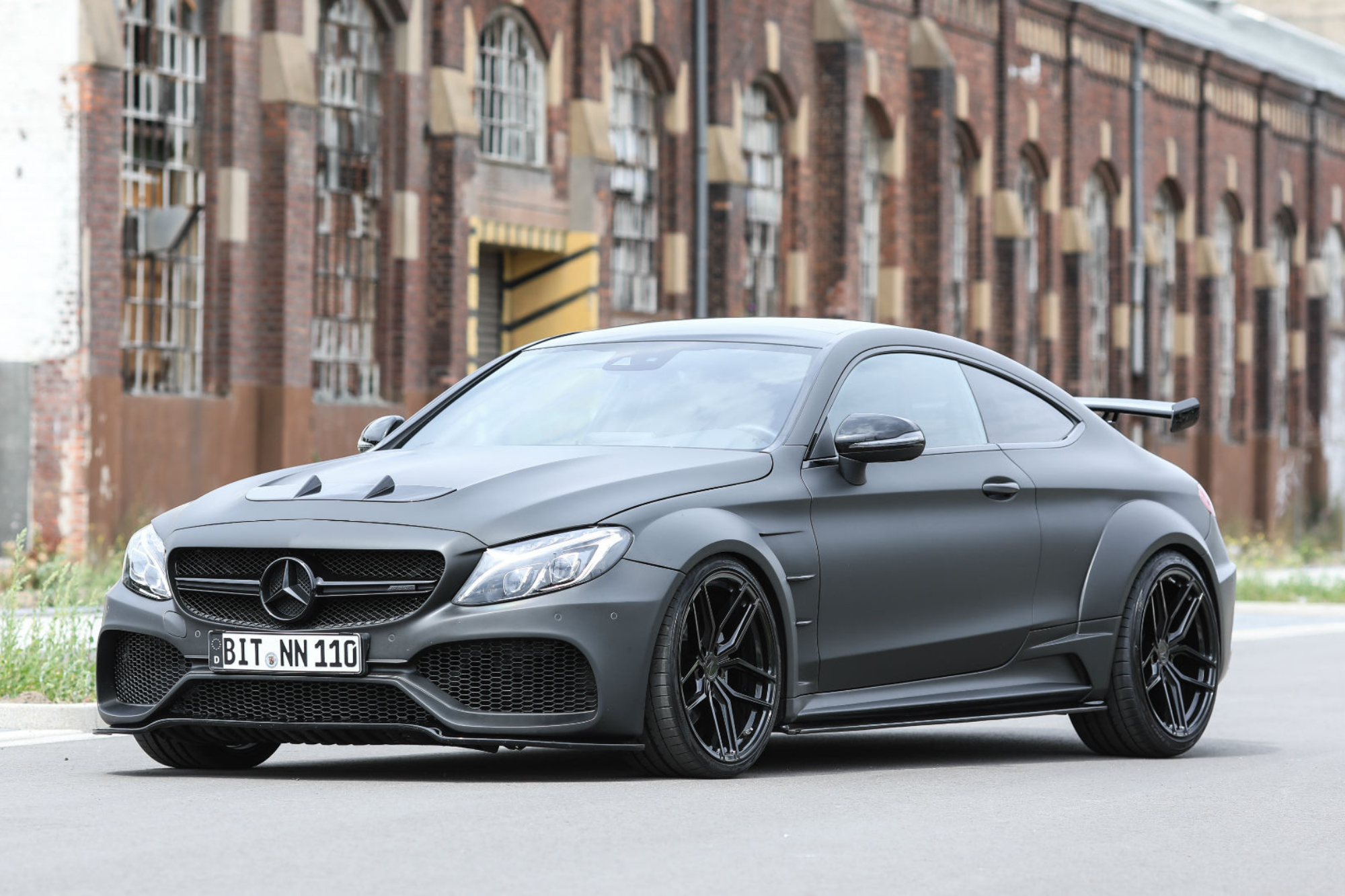 Some of the best mods for the Mercedes C43 AMG include:

The Mercedes-AMG C43 responds incredibly well to performance upgrades. The only real question with the M276 DE 30 LA is how much power the internals can really handle. It features an aluminum block with forged pistons but cast connecting rods. This makes the rods the weakest point in the engine.

In reality, there is no specific, magic horsepower or torque number that the C43 can handle. Altogether, engine longevity all depends on setup, tuning, and most importantly, responsible driving. For those looking to push their cars into the upper horsepower ranges, adequate fueling and cooling are going to be the biggest concerns that need to be addressed.

With that being said, 500whp/wtq is generally considered the upper limit for the connecting rods. Most tuners will say that the M276: DE 30 LA can reliably handle that much, but anything above is asking for trouble. For those serious about making big horsepower, fully built blocks and completely forged internals are a must.

By far the biggest bang for your buck upgrading the AMG C43 is going to be ECU tuning. It is our top choice for the 5 best AMG C43 performance upgrades, and it really brings the car to life. Tunes generally increase performance by increasing boost pressure, optimizing air-to-fuel ratios for power, and advancing ignition timing. Adding just a few pounds of boost and a couple of degrees of timing can seriously alter the power output of an engine.

You can easily add 90-120hp (75whp-100whp) and 120-150tq (100wtq-125wtq) to a completely stock car with just tuning. Tunes can also help account for other modifications made to the car, including intakes, exhausts, and alternate fueling. Not only will they make the car more responsive to other upgrades, but it will also help the engine run safer after they are installed, too.

Besides just peak power increases, tuning also provides a larger overall power band and vastly increased turbo responsiveness. The C43 pulls longer and harder after tuning, and it is much quicker off the line and out of corners. Tuning also allows for live data logging and monitoring for some tuners, which lets you check how your car is doing post-tuning.

Our top flash tuning options are AMR Performance and Eurocharged. They both offer off-the-shelf maps as well as custom tuning options. AMR and Eurocharged are the two most reputable e-tuners within the community, with Eurocharged especially having an impeccable reputation. Their tunes offer similar gains and they both can work with most custom setups.

Our top piggyback tuning option is the JB4 Tuner. JB4 is a widely used tuner in the BMW and Audi-VW communities, and their Mercedes-Benz line is solid. The JB4 is available for about half the price of custom tuning options, and comes with access to an app that can be used to monitor 40 different engine parameters in real time. It can be installed on a stock vehicle, and is also adaptable to many different upgraded setups.

The next item on our guide to the 5 best AMG C43 performance upgrades is the intake system. Intakes can be somewhat of a controversial mod for many new cars, as most OEM intakes actually flow pretty well. The stock intake for the C43 flows okay, for stock power levels, but on more powerful builds they start to become choke points.

An intake by itself on the DE 30 LA will net around 10-20whp/wtq, and it will gain even more with a tune. In addition, the Mercedes-AMG C43 will also see improved throttle and turbo responsiveness. The turbo will spool a little bit quicker due to increased airflow, which will result in earlier peak power and a larger power band.

It also drastically improves the look of the C43 engine bay. The stock intake looks cheap and adds nothing visual under the hood, whereas aftermarket intakes bring a sleek but aggressive appearance. As well, the K&N style cone filters on aftermarket intakes offer much better flow characteristics than the OEM panel filters.

We have three suggested intakes for the M276: DE 30 LA; one each from Logos Engineering Motorworks, BMS, and ModalWorks. They all offer relatively similar performance gains, but they each have pretty different designs and pricing.

The cheapest but most popular option is the BMS V3 Dual Intake system. It retains the OEM location of the filters and offers a lot of volume, but the design does not allow for the entire OEM scoop to be retained. This unfortunately means it can struggle to pull in cooler air from outside the engine bay.

The Logos Engineering Motorworks intake relocates the filters to the front of the engine bay and has the least amount of piping, so it offers the quickest path for air into the turbos. The ModalWorks intake keeps the OEM location of the filters, but replaces the factory scoops with upgraded carbon fiber ones – ensuring access to cool air from outside of the hood. The ModalWorks is by far the most expensive, but also offers the sleekest and best looking design.

Downpipes are another great performance upgrade for the Mercedes-Benz AMG C43. They connect to the turbos and one of the most crucial parts of an exhaust system. Upgraded pipes will increase performance, reliability, and sound (with a tune), making them an obvious choice for one of our 5 best AMG C43 performance upgrades.

Unfortunately, the stock downpipes are restrictive and impede flow while creating a lot of backpressure. This reduces exhaust scavenging and increases EGTs, which strangles performance on back to back runs. Aftermarket downpipes reduce this issue by allowing for greater flow and reduced backpressure.

Power gains are around 10-20whp/wtq with downpipes, and they require tuning on this platform. Without tuning, C43s can actually lose power because the engine will not compensate for the reduced backpressure. However, upgraded downpipes allow for tunes to run more boost, resulting in more power.

When deciding between downpipes for the AMG C43, the biggest consideration is catless or catted. Catless downpipes offer the best performance, but they are not street legal and are really meant for track and competition use. On the other hand, catted downpipes offer relatively similar performance, eliminate the awful catless smells, and remain emissions compliant.

Our catless recommendation is the Weistec Engineering downpipes. They are incredibly popular within the community, and get high praise for their solid quality, fitment, and performance. Our catted recommendation is the Logos Engineering Motorworks ultra high flow cat downpipes. They offer similar performance to the Weistecs but are emissions compliant with 200 cell cats.

Next on our guide to the 5 best AMG C43 performance upgrades are water-methanol injection kits. These kits are a bit of a more involved mod than our other suggestions, but what they add in complexity they more than make up for in performance and reliability.

These injection kits work by injecting a 50/50 solution of water and methanol into the charge pipes that connect to the intercooler. This has two purposes: not only does it reduce the temperature of the air going into the engine, but the methanol itself increases the octane rating of the fuel. IATs can be reduced substantially by injecting water-meth, and octane ratings can increase by as much as 20 points.

Proper tuning is crucial to taking the full performance advantage of water-methanol kits. Still, they offer increased detonation protection even without tuning. The massively reduced charge air temps from the methanol sufficiently decrease cylinder pressures through cooling, reducing EGTs and the likelihood of potential detonation events. This reduces engine wear and tear which increases longevity.

Our recommendation for water-meth kits on the M276: DE 30 LA is from Weistec Performance. Their kit has everything needed for direct bolt-on installation, including silicone charge pipes with integrated injector ports. It has its own controller with a MAP sensor, which progressively increases injection volume along with boost, allowing for the best performance.

Our final recommendation for upgrading your AMG C43 is upgrading the intercooler. The C43 uses a water-to-air intercooler, which utilizes water and coolant to cool the air passing through it. The OEM unit is good for stock power levels and smaller builds, but anyone living in hotter climates or looking at larger builds should really consider an upgraded intercooler.

Our first intercooler recommendation is the Wagner Tuning Performance Intercooler Kit. It offers 133% more external core volume compared with the stock unit, and drastically improves cooling. It also includes a 75mm charge pipe, which is nearly double the size of stock.

Our second suggestion is the Logos Engineering Motorworks High Performance Intercooler Kit. The Logos core is 5% larger than the Wagner Tuning unit, and is based exclusively off the design of the factory intercooler. It offers incredible cooling capabilities and has a 52mm charge pipe.

Both units have WMI integration ports included. This makes for seamless integration for any serious builds utilizing both mods without wanting to add unnecessary clutter to the engine bay.

The M276: DE 30 LA inside the Mercedes-AMG C43 4MATIC (W205) is a stout engine that is more than capable of handling some performance upgrades. The stock block and internals can take a lot of power before they need to be replaced, and are known for their incredible engineering. These cars can easily take gains of 120whp/wtq without breaking a sweat.

We looked at the 5 best AMG C43 performance upgrades in this guide, and all of them are worthy mods. Tuning is by far the best bang for your buck horsepower and torque wise, but we understand that not everyone is looking to remove the factory ECU settings. Intakes and downpipes are great ways to increase flow in and out of the engine, which not only adds power but also aids in reliability. Finally, water-methanol injection kits are great upgrades that balance increased performance with increased reliability.

Overall, the AMG C43 has vast amounts of untapped performance potential, and it is just begging to be upgraded. Do you have experience upgrading your C43, or are you considering doing so in the future?
Let us know in the comments below!