The LT1 350 is a 5.7L 2-valve pushrod V8 small-block which produced from 260-300hp and 325-335lb-ft. of torque. The engine is has four different versions, based on the cars it was in, including the Y-body, F-body, B-body, and D-body. All versions used a cast iron block although the Y and F bodies used aluminum heads instead of cast iron in the other two versions. In 1994 the LT1 changed from speed density to a mass air flow sensor and from batch fuel injection to sequential port injection. The engine also received a computer controlled transmission in the same year.

The LT1 also uses reverse-flow cooling in which the heads receive engine coolant before the block does, opposite of traditional cooling systems.

A high performance version of the LT1 was released in 1996 and dubbed the LT4. The LT4 had more aggressive cams, lighter valves, larger injectors, a high-performance crank, higher flowing intake manifold, and a higher compression ratio. The LT4 produced 330hp and 340lb-ft. of torque and was only featured in the 1996 Corvette Grand Sports, 1997 Camaro SLP SS, and 1997 Firebird SLP Firehawk. Less than 7,000 total LT4’s were produced. 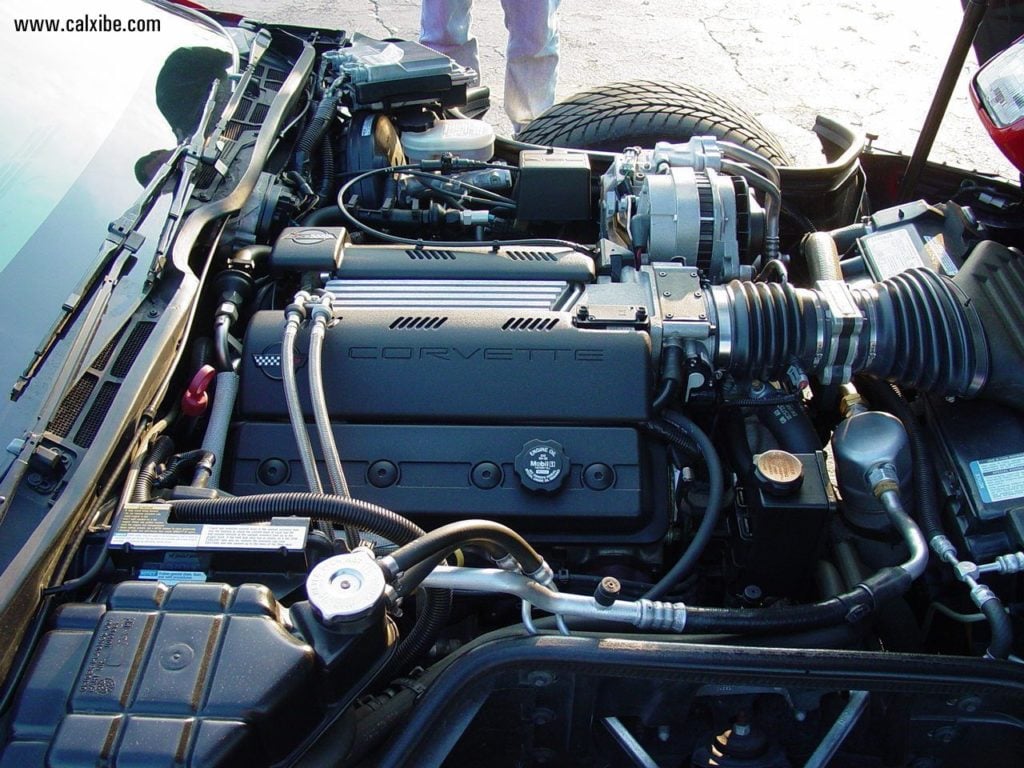 The most common problems with the GM LT1 engine include:

Throughout this article we examine these 5 common LT1 engine problems along with symptoms and replacement. It’s important to note the LT1 is an old engine, so it will likely require a little extra attention and maintenance. Despite a few issues the LT1 is a very reliable engine. Anyway, let’s jump into the above LT1 failures and then circle back to reliability at the end of the article.

Before we get into OptiSpark itself, let’s cover some basics on distributors. Distributors are ignition related components that are responsible for distributing electrical current from the ignition coil to the spark plug. Traditional distributors have internal rotors that turn and as the rotor turns voltage is sent to the spark plugs one plug at a time. The downside to traditional distributor technology is that the engines computer or ECM didn’t know what cylinder was firing until the rotor inside the distributor passed that specific cylinders fire point.

Up until the LT1, small-block Chevy engines used a “high energy ingition” distributor, also referred to as HEI which functions per the details above. For the LT1, Chevy debuted a new distributor technology called OptiSpark. OptiSpark was an electronic light-triggered distributor that sat in the bottom front of the engine beneath the cam-driven water pump. The OptiSpark used a sensor located at the front of the engine that used an LED light and a slotted spinning wheel. The light would pass through the wheel and be able to tell the ECM each piston location as well as which piston was firing next.

However, despite the larger ventilation holes, OptiSpark failure is still very common. Because the distributor is located in the bottom front of the engine it is subject water, dirt, grime, etc. from the road being kicked up at it. Additionally, when the water pump fails it usually takes the distributor out with it, and radiators leaks frequently take it out too.

Basically the OptiSpark was very prone to getting water or coolant or something in it because of its location in the engine bay. And wet substances on an electrical component make for easy failure.

Symptoms of LT1 OptiSpark problems include:

While the 94+ OptiSpark’s are less prone to failure, it is still very common. The best bet for replacement is to install an aftermarket distributor (MSD, BWD, Petronix, Dynaspark are common options). Aftermarket distributors have larger bottom drain holes, vents for fresh air, and a vacuum system to prevent moisture build-up. Additionally, they provide more water resistance.

OptiSpark problems are one of the most common GM LT1 problems (if not the most common). There isn’t any need to replace OptiSpark before it breaks, but when it does we recommend replacing it with a quality aftermarket unit instead of an OEM one.

The LT1 engine doesn’t take heat very well. In these older engines coolant leaks or cooling system failures are common (as with any old engine) and can lead to engine overheating. The head gaskets, which sit between the heads and the block, are prone to failing under high temperatures. When engine temps get above spec the block and heads over-expand and cause the gasket to fail.

When a head gasket blows, air is able to escape from the combustion chambers, reducing air pressure and cylinder compression. Additionally it can result in coolant and oil leaks. Ultimately, the end result is decreased performance and driveability.

The only replacement option is to replace the head gasket. To prevent this issue make sure you do not drive if the engine is ever overheating. Shut the car down immediately and have it towed until you fix the cooling issues.

Failure of the first two sensors will simply cause your low coolant light or coolant temp gauge to not work on your dash, and has no impact on driveability or performance. However, failure of the coolant temp sensor responsible for sending readings to the PCM will cause performance related issues as well as starting issues.

Fortunately, on the LT1 it is the coolant level sensor that fails frequently, not the temperature sensor. When this sensor fails the only thing you will notice is the low coolant light illuminated on the dash. If you check your coolant levels and they aren’t low and there aren’t any coolant leaks, then your sensor is faulty.

A lot of people will just unplug the sensor and deal with the light. At ~$85 it isn’t the cheapest sensor in the world but replacing it will get rid of the annoying light and give you piece of mind that if the coolant is actually low, you will know. The sensor is located on the radiator next to the battery box and is a simple DIY replacement. There are some cheap aftermarket sensor options available for around $20 but you get what you pay for.

PCV is positive crankcase ventilation. When an engine combusts it produces waste gas which is sent through the exhaust system and out the tailpipes into the atmosphere. However, small amounts of this gas leaks into the crankcase. When these gasses get into the crankcase they contaminate the oil and make it sludgy which can cause significant internal engine damage. Too much waste gas getting into the crankcase can also increase crankcase pressure and cause gaskets and seals to break and leak.

Enter the PCV valve. This valve is attached to the crankcase and vents out these harmful byproduct gasses. Since these gasses are unburned, they are harmful to the environment. So the PCV valve reroutes these gasses back to the intake manifold where they are then burned in the combustion chamber and sent out to the atmosphere via the exhaust system.

When these gasses are sent back to the intake manifold, they pick up some oil mist as well. This leads to oil in your intake system which leads to carbon buildup and restricted air flow.

Why the LT1 has PCV Issues

Catch cans are a common PCV system part that sit behind the PCV valve and catch any oil deposits in the gas before it is routed back to the intake system. Essentially minimizing the amount of oil that gets passed back into the intake system. The LT1 did not come from the factory with a stock catch can.

The simplest way to resolve any PCV related issues is to install an aftermarket catch can. The catch can will capture all of the oil from the crankcase gasses and prevent them from being passed into the intake manifold which can then cause various performance issues, spark plug fouling, etc.

The LT1 OptiSpark issue also causes a lot of issues with the spark plug wires. And the PCV system issues also frequently foul the spark plugs. Therefore, both spark plug and wire failure are common on the LT1 350 due to these other common problems with the engine.

Spark plugs foul easily when they get sludged up with oil. The easiest sign of bad plugs is misfires, rough idling, and trouble starting the engine. You can usually tell by looking at the plugs if they are bad but if they are coated in oil that is a pretty good sign they should be replaced and you should add a catch can. DIY’ing spark plug changes on the LT1 is not near as easy as it is on most other cars, but is manageable for most.

While the spark plugs are somewhat easy, the spark plug wires are a bit more challenging. Here are some instructions on DIY wire replacement.

A few symptoms of LT1 spark plug and wiring problems include:

Overall, the LT1 is a very reliable engine. The OptiSpark distributor problem is really the only issue that is pretty much guaranteed to happen on this engine. Head gaskets are generally good so long as the engine isn’t overheated. The coolant sensor issue doesn’t really affect performance or have any negative implications. And the PCV system and spark plugs and wires both have preventative options but can also be repaired very affordably.

Ultimately, there aren’t really any problems with the LT1 that will cause catastrophic engine damage or lead to very expensive repair bills. Not as much can be said about its successor LS1 problems.

The block, rods, pistons, and heads are all pretty stout and won’t give any problems under stock levels. Throwing some significant performance modifications into the mix can lead to some issues but unfortunately there isn’t a ton of aftermarket support for these engines.

200k+ miles while maintaining reliability is very realistic on the LT1. However, keep in mind that these are older engines and maintenance items will arise. At 20+ years old typical things like water pumps, radiator, belts, hoses, etc. are all items that fall under this “general maintenance” category.