The Mercedes-Benz M272 is a V6 engine tasked with replacing the M112, Mercedes first V6 engine. All prior 6-cylinder engines from Mercedes were straight sixes. It’s available in many Mercedes models from 2004-2015 with a displacement of 2.5L, 3.0L, or 3.5L. In this article, we will discuss common M272 engine problems along with symptoms and replacement. 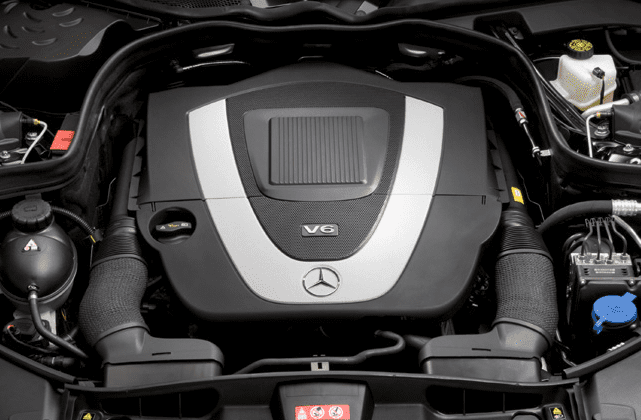 Prior to diving into M272 engine failures we will lay out the various models using the M272 engine. It’s quite the exhaustive list. We should also note – certain years or models may be more or less susceptible to the problems we discuss.

The 2.5L variant of the M272 is in the following Mercedes-Benz models:

Mercedes-Benz’ 3.0L M272 engine is in the following models:

This is the largest M272 engine available at 3.5L and delivers 268-302 horsepower. It lives in the following Mercedes:

Four of the most common issues with the Mercedes M272 engine include:

Simply because we’re calling these 4 issues some of the most common does not mean every M272 will run into these failures. Also, many M272 engines are over a decade old now. As with any aging engine, a lot of potential problems become fair game. You may run into issues that are not mentioned in this article. Anyways, let’s jump in and discuss each of the above M272 problems.

This problem likely warrants a post of its own. Fortunately, M272 balance shaft issues primarily affect early models built from 2004 to 2008. The M272 uses a 90° V angle like most V8 engines. However, that results in excessive vibration. Mercedes installed a balance shaft on the M272 to help combat these vibrations. The balance shaft sprocket on early engines was made with weak materials. Over time the M272 sprocket wears down which then throws timing off.

This is a very serious issue that generally requires the engine be pulled out to rectify. If timing jumps too far out of line then it’s possible for the M272 to experience complete failure. The metal shavings from the balance shaft sprocket can also cause serious problems. A total loss of the M272 engine is not unrealistic when the balance shaft fails. Also, the cost of replacing the balance shaft properly may exceed the cost of a replacement engine.

Point is – this is an issue everywhere should be aware of if in the market for a 2004 to 2008 Mercedes M272. Ensure this repair was tackled previously and done correctly. Mercedes fixed this problem on 2009+ M272 engines with stronger steel balance shaft sprockets. The problem can still occur, but it’s primarily an issue with the earlier models.

A few symptoms of an M272 balance shaft failure include:

A check engine light will generally appear once the sprocket completely fails. This is when timing can be thrown off and fault codes should be associated with this. M272 balance shaft fault codes may include: P0059, P0060, P0064, P0272, P0275, and P0276. Additionally, incorrect timing will cause very rough running. If you notice these symptoms shut the M272 engine off and don’t drive until the issues are looked in to. If left alone the damage may become worse.

Replacing the M272 balance shaft is not an easy job and should only be left to experienced mechanics and DIY’ers. The actual repair kits are only about $400-500 in parts. Not too bad, however the labor is the real issue. This job can often run into the $2,000+ range at a repair shop. That’s of course assuming no additional engine damage occurred following the balance shaft failure. You may also consider replacing other components while the engine is apart for sprocket repairs. 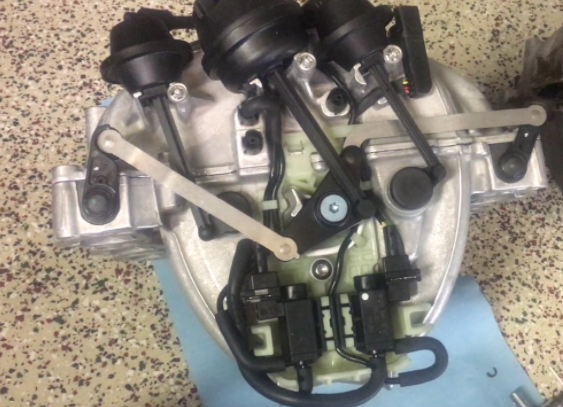 The M272 intake manifold is another problem that has potentially severe consequences. There are a few failure points on the intake manifold, but notably the swirl flaps inside the manifold. We’ll get to that in a moment. Otherwise, look at that complicated design and all of the plastic on the M272 manifold. The two small black caps are one place you’ll want to look. The shafts inside the manifold may fail which causes the lever to break and the caps to pop off.

Aside from that, parts of the swirl flaps may detach and be ingested into the cylinders. This is less common, but a very serious problem. If the M272 manifold swirl flaps travel through the engine they might take out some internals in the process. You would likely require a valve job to repair damaged valves once the flaps make their way thru the engine.

A few common symptoms of M272 intake manifold failures include:

The intake manifolds job is to distribute air to the cylinders appropriately. When parts begin failing on the M272, air-flow may be uneven or inadequate. This can cause check engine lights and fault codes. A few common fault codes are P2004, P2005, and P2006. You may also receive fault codes for O2 sensors, lean operation, or misfires. Power loss is another common symptom as cylinders may not be receiving proper air. Finally the uneven air-flow may cause rough idle.

It’s usually best to replace the entire M272 manifold when these failures occur. There are repair kits out there. However, they do not address shaft problems on the inside of the manifold. Some repair kits do use stronger parts to prevent failure. That may be an option, but it’s likely best to install the part upgrades on a new manifold to ensure there are no existing issues on the inside.

A new intake manifold comes in around $600-700. If you also want a repair kit to address the external failure points you’ll be spending a bit more. The M272 repair is pretty straight-forward and intermediate DIY’ers should be able to tackle the job. Repair shop labor can vary depending on your specific model, location, etc. However, it’s usually about 3-4 hours labor so factor in a few hundred extra.

Alright, we’ll speed things up moving thru the rest of this post. Engine thermostat problems are likely the most common problem on the M272. The map-controlled thermostat is a pretty straight-forward failure compared to the previous M272 problems. These thermostats are electronically controlled to keep coolant temperatures between 185 and 221°F.

The M272 thermostat may fail in the open or closed position. When closed it may cause your engine to over-heat. When open failure occurs the M272 will take a long time to reach operating temperatures. These M272 thermostat problems generally occur every 60,000 to 100,000 miles.

Symptoms to look out for include:

Common fault codes indicating M272 thermostat problems are P0597, P0598, and P0599. Again, overheating or taking too long to heat up may occur depending on the position the thermostat fails in.

Fortunately, the thermostat is cheap at about $60. You’ll also need a bit of coolant to top off after the repair. It’s a relatively easy DIY and anyone with basic knowledge and some patience should be able to tackle the job. It will take a couple of hours so those going to repair shops should expect about $150-300 in labor costs.

Oil leaks aren’t a terribly common problem with the Mercedes M272. Especially compared to the previous M112 V6 engine. However, given the age of the M272 oil leaks can and do happen. An important area to pay attention to are the electrical plugs for cam adjuster magnets. If the oil leaks thru the electrical connecter it can make its way up to the engine harness. That then becomes an expensive repair if the wiring harness is damaged.

Of course, specific symptoms depend on the location of the leak. A visible leak is a dead giveaway and can often be the only noticeable symptom. If oil is dripping onto hot parts you may smell burning oil or see smoke. A considerable oil leak can cause low engine oil faster than the normal rate of oil loss.

How reliable is the Mercedes M272 engine? Overall, the M272 is generally less reliable than an average car. It’s not all bad, but there are a few serious issues that can lead to costly repair bills or complete engine failure. Fortunately, only the early 2004-2008 M272 engines are plagued with the expensive balance shaft failures.

Though unlikely, intake manifold problems can also cause serious issues. Thermostat failures may be the single most common problem on the M272. However, it’s a pretty inexpensive and simple repair. Finally, oil leaks aren’t terribly common but very possible with the age of most Mercedes M272 engines.

Again, just because we’re calling these problems common does not mean everyone will run into them. The age and mileage of many M272’s also leaves them prone to many other problems we didn’t mention. That said, the M272 isn’t a terrible engine by any means. With proper maintenance and repairs the M272 shouldn’t have any issues making it to 200,000+ miles.

Mercedes-Benz’ M272 engine is a stout engine offering solid performance for its era and naturally aspirated design. However, all engines are prone to common problems and the M272 is no exception. Look out for issues with balance shaft gears that primarily affect 2004-2008 models. Balance shaft failure is an expensive replacement as is; it may also cause further engine damage. Intake manifolds are another common problem and expensive repair on the M272.

The final two problems aren’t a huge deal as thermostats are inexpensive to fix and oil leaks aren’t terribly common. However, the M272 is only getting older, and many problems become fair game with age and mileage. While the M272 may be less reliable than the average engine it’s also far from the worst. Ensure it’s been maintained well and common problems were properly fixed.

What’s your experience with the M272 engine? Leave a comment and let us know!