The Toyota built 2JZ – an engine that lives in the heart of backyard enthusiasts and professional track-day teams alike. Since 1991, the 2JZ has become the ultimate cult classic for extreme power with relatively little work. Due to the 2JZ’s cast-iron bottom end, balanced inline design, square-shaped engine geometry, and forged crank, it can easily handle twice its stock horsepower numbers right from the factory. Not many other engines can do that.

Most enthusiasts drool at the prospect of owning a 2JZ-GTE powered vehicle due to the lower 8.5:1 compression ratio. The 2JZ-GTE also has better power-supporting side feed injectors and larger intake ports. Most notably, the 2JZ-GTE has a set of sequential turbos installed from the factory, while the 2JZ-GE is naturally aspirated.

As the 2JZ-GTE was only available in the Mark IV Supra stateside, prices for 2JZ-GTE motors have skyrocketed. Unfortunately, for most of the working class, 2JZ-GTEs are no longer a realistic purchase.

For that reason, we’ll be focusing on the GTEs underdog twin, the 2JZ-GE. 2JZ-GEs are still fantastic motors with a ton of performance potential at a much lower cost. This is mainly due to their availability, found in US-spec Lexus IS300s, GS300s, and SC300s.

Just because the GE is naturally aspirated from the factory doesn’t mean that it has to stay that way. As the 2JZ-GE is nearly identical to the GTE, the 2JZ-GE can reliably push sizable horsepower numbers too.

The primary way to extract horsepower from a 2JZ-GE is similar to the way that you’d increase power on a GTE, by tacking a couple of new turbos to the equation.

Starting with a meager yet zippy 230 hp, there is still a fair amount of upward mobility possible through forced induction of a 2JZ-GE. While power figures might not be as sky-high as those of the 2JZ-GTE, it is realistic to bet on a power figure around 350-400 hp reliably on stock internals.

The primary limitation on a 2JZ-GE making extreme power is its higher compression ratio, as adding an excess of pressure to already highly pressurized cylinders is a recipe for issues. It is typically cited that 7-8 PSI of boost is the higher end of the ceiling without considering GTE rods and a GTE head gasket in addition to other supporting mods.

Generally speaking, a 2JZ-GE with a solid turbo kit and basic supporting mods can reliably run 350-400 hp without too much effort and without draining the bank. It’s when numbers reach 450 and beyond that, additional, and costly, steps need to be taken to prevent the engine or transmission from grenading.

By most accounts, a 300-400 hp turbo 2JZ-GE would likely run just fine with only the addition of a piggyback or standalone tune. This requires an access port of some kind or a flashed ECU, this is largely up to personal preference. With that being said, once you start seeing numbers near the top of that spectrum, it might be time to start considering an upgraded fuel system and injectors.

Into the 400-450 hp range, a high-flow fuel pump is a necessity to prevent fuel starving your engine. Most 2JZ-GE owners suggest a Walbro 255LPH fuel pump as a solid upgrade choice in the higher horsepower numbers.

Rounding out the fuel system, high horsepower also requires larger injectors to deliver more fuel into the cylinders. Depending on your other existing hardware, 500cc injectors are the largest injectors that can be run with a standard fuel-tuning device, like an SAFC-II. If larger injectors are needed, a more substantial engine management system is needed.

There are many options when it comes to turbocharging a 2JZ-GE engine. Turbo kit solutions are the most cost-effective and easiest way to achieve forced induction on a 2JZ. Some people opt for a custom setup if big power goals are the end game. As custom turbo setups are highly specialized and unique to each individual car, we will be focused primarily on ready-made kits to circumvent confusion.

As with most highly tunable engines, the 2JZ-GE has a wide catalog of turbo kits available. Deciding on the right turbo kit for your own individual needs requires considering a multitude of factors. How much are you looking to spend on a kit? How much power are you looking for? What supporting mods are required to run each kit?

Luckily for you, we’ll break down a few of the most common 2JZ-GE turbo upgrade kits and discuss the pros and cons of each. 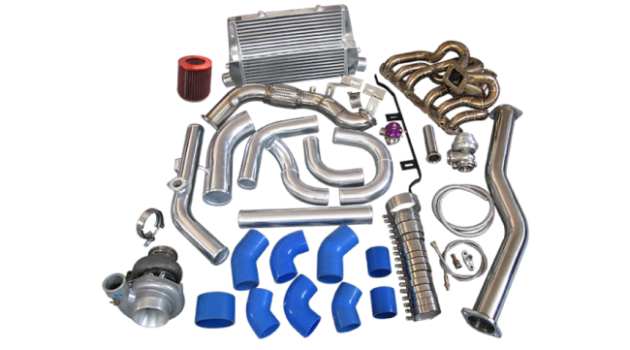 To kick off the list, we start with the widely regarded go-to, jack-of-all-trades 2JZ-GE turbo kit. In terms of price-to-quality ratio, it’s hard to beat the all-inclusive CXRacing Turbo Intercooler kit.

With many turbo kits, cutting, welding, and fitment headaches often come with the territory. Fortunately, the CXRacing 2JZ-GE setup is a full bolt-on kit, no cutting or relocations required.

In addition to being easy to install, the individual parts that comprise the kit are quality constructed. A 1.75” 11-gauge manifold and stainless steel downpipe ensure a well functioning and unproblematic system under a heavy load.

Depending on the vehicle, the CXRacing 2JZ-GE Turbo Upgrade kit provides a couple of turbo options for varying needs. The two options provided for the kit include a T70 T4 turbo or a GT35 turbo. Most user reports claim that the GT35 is unquestionably superior to the T70 in terms of both power gains and quality, yet at a higher price. If you have the money to spare, the GT35 is the way to go.

With relatively few negatives, the most significant gripe is questionable long-term reliability. Most users only report issues with the kit if they are pushing high PSI boost pressure on a high-mileage engine, so it may not necessarily be a question of the kit’s reliability as it is of owner judgment.

If quick and easy 2JZ-GE forced induction on a budget is the goal, the CXRacing 2JZ-GE Turbo Upgrade kit is a solid option backed by a huge number of owners in the community. 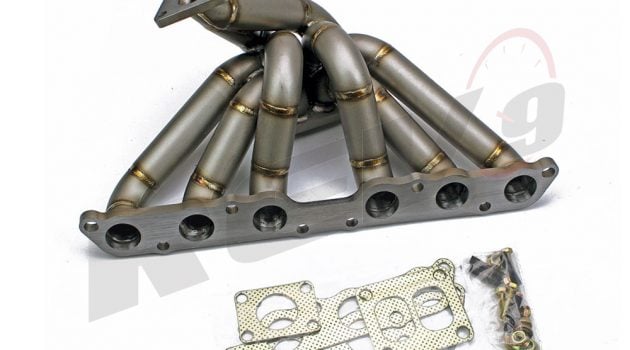 In terms of high-quality, budget 2JZ-GE turbo kits, the REV9 2JZ-GE turbo upgrade kit is a solid option. Despite requiring additional parts, the overall build quality of the kit stands up to the more expensive CX kit.

Unfortunately, the REV9 kit lacks an intercooler and piping, leaving that bit up to the customer to source. While intercooler kits can be commonly found floating around the internet for 2JZ-GEs, finding one with exact fitment for your vehicle might be a time and research-heavy process. Regardless, even with the added cost of a separate intercooler kit, the overall price would likely be less than the CXRacing kit.

The build materials and horsepower potential of the REV9 kit are similar, if not slightly better, than the CXRacing setup. The REV9 kit includes a fully stainless steel manifold set, including a stainless intake, tube, downpipe, and manifold. The manifold set is really the star of the show when it comes to this kit, employing V-band 50mm wastegate flanges that are typically only seen on high-end kits.

The REV9 2JZ-GE Turbo Upgrade Kit is the best option for someone who is looking for a high-quality turbo kit that might not trust intercooler setups that come with all-inclusive kits. If you have unique ideas about running an external intercooler kit, or already have one laying around, the REV9 kit is your best option. 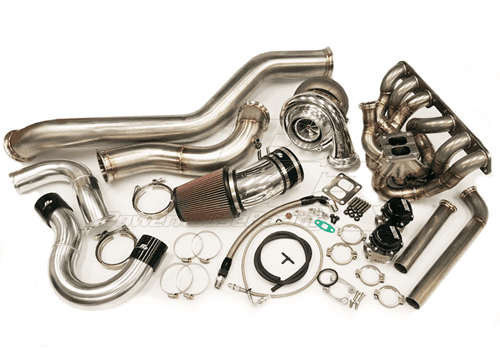 The Powerhouse Racing PHR kit is the Rolls Royce of the 2JZ-GE turbo kit market. Virtually every piece of the kit being customizable for your own unique needs. Upon first glance, the kit is intended specifically for NA MKIV Supras, but with modifications made for clearance and custom intercooler piping, this kit will work with most 2JZ-GE motors.

Superior build quality slides in as the second most notable feature of the kit, as all of the components are built by hand by master fabricators. All exhaust components in the kit are coated with 2000 degree black heat coating, ensuring superior durability and heat reduction.

Due to the performance focus of the kit, some labor-intensive steps have to be taken to ensure proper fitment. While this kit might be the best on the list in terms of quality, it is far from the easiest to install. Due to the high price and difficulty, the Powerhouse Racing PHR 2JZ-GE Turbo Upgrade kit is likely only suited for those looking to thrash their 2JZ-GE in a track setting at a competitive level.

If you do have the time and money to sink into a heavy project, this is the kit for you.

The 2JZ-GE has always existed in the shadow of its 2JZ-GTE relative but with little justifiable reason. A bulletproof engine that has tons of upward potential, the 2JZ-GE has become the black sheep of the family. That might not be a bad thing. As it is less revered and sought after the 2JZ-GE, and the cars that it powers, remain affordable if not cheap. A perfect opportunity for an average enthusiast looking to make some reliable force-induced power.

Despite being the underdog 2JZ, the GE has tons of options as far as turbo kits are concerned. With that being the case, there is a 2JZ-GE turbo upgrade kit for everyone. Hopefully, this guide helped to slim down the many 2ZJ-GE turbo upgrade options, and aided in your hunt for the perfect turbo kit.

If you found this content helpful, some of our other guides might also help on your quest for the perfect 2JZ build. Check out our Toyota 2JZ-GTE Engine Complete Guide for additional Supra information, or our 6 Best Lexus IS300 Performance Mods guide for more 2JZ-GE content. Safe driving!